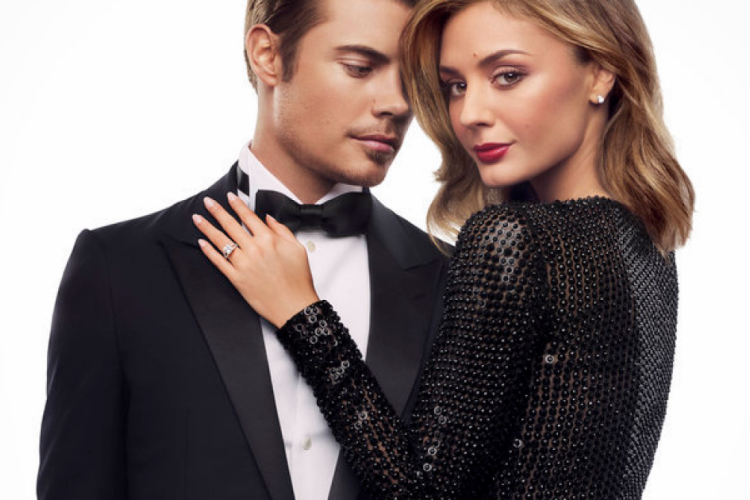 When we're getting ready for summer or going on a vacation, we usually take along a trashy book to read to kick back and relax. E! channel's tabloidesque drama The Arrangement is a tv-version of those addictive pageturners, and its simple cheesiness has me hooked.

Aspiring actress Megan Morrison (Christine Evangelista) auditions for a lead role in a Jason-Bourne-esque action flick starring opposite A-List hunk Kyle West (Josh Henderson). Their sizzling chemistry-at-first-sight inspires his team to present a $10 million marriage contract, which includes West's close ties to his self-help guru Terence Anderson (Michael Vartan) and his Institute of the Higher Mind. Acting more like a Big Brother cult than a competent health-based center, the new couple is quickly challenged by IHM's control and the minutiae of living in the public eye.

E! channel touting their original series as similar to Fifty Shades of Grey might not be the right foot to start off with, especially for those who don't like the E.L. James' novels or films. The two general premises have a lot of common both in the worst and best way. For the former, The Arrangement features a general contract, the tacky dialogue, and silly side-plots. For the latter, it has luxurious production design and the actors do the best with what they're given.

Thankfully unlike Fifty Shades's Ana and Christian, this duo has a lot of issues to deal with, and none of them come close to abusive behavior passed off as "BDSM" or inner goddesses. Problems from Morrison's disturbing past comes back to haunt the contract's "morality clause" as she tries to navigate this crazier side of Hollywood, while West struggles with superficiality versus authenticity as a person and an actor. Standing in the middle of their relationship is IHM, which she doesn't fully trust, and ultimately creates the creepy suspense around this fantastical 'romance' and the cult-like organization West is fully involved in.

Most of us know Hollywood isn't perfect because scandals slip through the cracks all the time. One of the series's biggest sources of highly-theorized inspiration was  Katie Holme's marriage to Tom Cruise and the influence of Scientology which led to its demise. The show coyly cashes in not on how actors market and brand themselves but which all-seeing, all-knowing Powers That Be wield its power over Tinseltown. With humor (intentional or otherwise), a flair for drama, and suspense, it takes what we think we know of the entertainment industry - feuds, deals falling apart, scandals created for publicity or to cover up other juicier scandals, Scientology - and leaves us wondering what actually goes on behind the scenes.

A big reason why this show works is its leading lady Christine Evangelista and her compelling performance in every episode. Realistically, her character is too easily influenced to just sign her life away because West is good in the sheets. Her career needs a serious upgrade and she has the talent to go far, so when the opportunity presents itself (aka the money and hot guy), it seems like a good deal. Quickly, Morrison has to adjust to the convenience her new life brings - travel, wardrobe, a new boyfriend - and face the sacrifices she's made for a lack of privacy and the convenience IHM affords. This wild ride makes her question if her future is worth the expense of autonomy. Morrison's feisty, independent, and personable as hell, and Evangelista acts circles around the cheesy dialogue thrown at her. Both the actress and character are destined for stardom, and it's strange that her acting chops exceed what this show can be and also fits this particular bill. Henderson's West isn't given as much to do, but over time you can see why they were cast and make a convincing duo.

The Arrangement aims to be meta, and for the most part works, even if it's exceptionally corny and indulges in what we see through the grapevine online or at grocery stores. Evangelista and Henderson's chemistry is playful and fun, while the Institute's unethical operation delivers unexpected twists. If one would be looking to enjoy a show that doesn't take itself too seriously, sign on up for The Arrangement. It's a sweet deal.

Email ThisBlogThis!Share to TwitterShare to FacebookShare to Pinterest
Labels: television shows, the arrangement