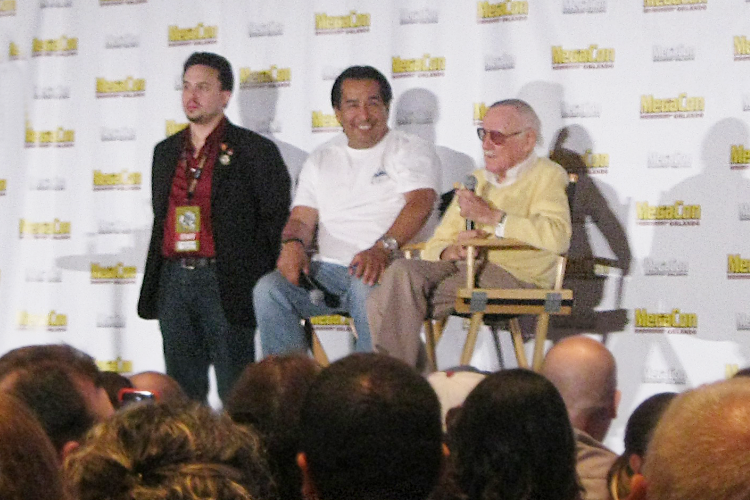 The Man, the myth, the legend Stan Lee comes to MegaCon Orlando. The beloved comic book creator stopped by for an exclusive panel as part of his farewell tour for convention appearances. Sitting alongside Lee was his events co-ordinator Max, both of which took part in the panel to share stories of their adventures working together and answering fan questions.

His entrance into the conference room was electrifying. Everyone in attendance couldn't help but cheer the man who created so many of our favorite comic book characters. Afterwards, Max shares a brief story of Lee wanting to make a trip over to Universal Studios theme park Islands of Adventure, where there is a Marvel land featuring all of his creations, and the mishaps that went down. I apologize for the shakiness of the footage. It's hard to keep the camera steady when you're excited!
The panel was full of golden moments, and we almost never wanted it to end. He answered a lot of fan's questions (his favorite superhero is Spiderman) and what keeps him going in life at his age (breathing). Stan was as sharp as could be answering fans questions, which had us all in stitches. With the idea in mind that this debatable is one of his last appearance at a Florida convention, when an admirer asked what should fans do to uphold his legacy, Lee responded that he's never thought about it, doesn't matter to him, and sets the fans free to do what they want.

Lee starting out the panel with answering a fan's question, which ranged from what kind of advice Tony Stark would give at a college graduation ceremony to his love of movies and what inspired him to write. The chemistry and camaraderie between Lee and his manager Max kept the fans roaring with laughter to create a panel that will be as memorable as the Marvel creator's legacy.