Pride and Prejudice and Zombies (2016) 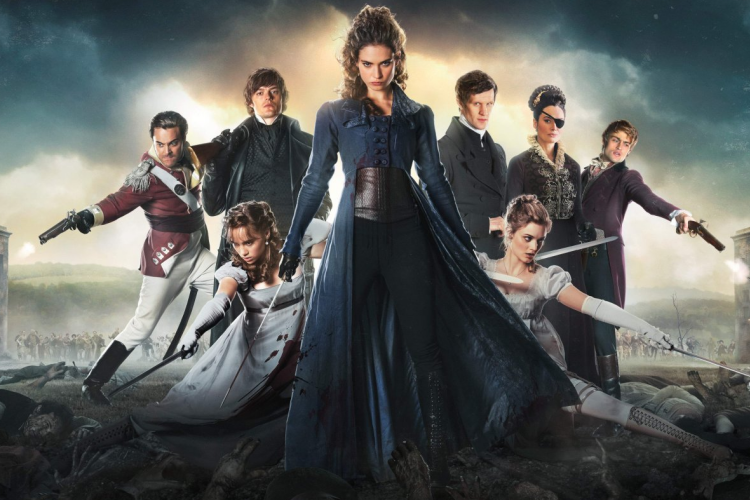 2009 took a turn for the unexpected for the publishing industry: a mash-up of classic literature and supernatural sprang up in every book genre. Author Seth Grahame-Smith mixed Jane Austen's Pride and Prejudice with zombies, which was followed by Abraham Lincoln: Vampire Hunter and Sense and Sensibility and Sea Monsters. When I initially saw the parody novels in bookstores, I didn't know what to think - was it a joke? were classics so uninteresting they had to be remade? Fast forward five years I couldn't wait for this movie, and now I'm jumping on the book as soon as possible.

It is a truth universally acknowledged that Hollywood has done its fair share of Pride and Prejudice adaptations. In its most recent version the Regency era is an alternative world where England is coming under siege by zombies. A class system breaks out between the wealthy who can afford to learn defense skills, and those who cannot, as well as humans and zombies. Out in the open countryside where villages are overrun with the undead, Mr. Bennet ensures his daughters survival with training in the fine art of war against zombies. Meanwhile Mrs. Bennet is up to her usual match-making, ensuring marriage and a safety net for her eldest daughters. Col. Mr. Darcy makes it his  priority to rid the earth of the undead, especially when his heart is captured by Elizabeth Bennet.

When a movie like this has been done so many times before, it's difficult to not compare new versions to the others like the 1995 made-for-television version with Colin Firth or the beloved 2005 version with Keira Knightley. However, Pride and Prejudice and Zombies manages a consistent job of not forcing the newer story and its performances into the past.

Lily James helming an 'Elizabeth for a zombified generation' is a ferocious and exciting new star. Her emergence in the live-action tale of Disney's Cinderella put her on the map as a soft and charming actress with plenty of potential waiting to unfold. As Elizabeth, she completely turns heads with not only her character's sword skills but also stubbornness, passion, and charm. When matched with the Sam Riley as the intense Col. Mr. Darcy, her spirited nature is not confined to a knight-in-shining-armor. One second she's reluctant to speak out, and the next she's striding into action on a white horse. It's nothing of short kick-ass.

Like James who will surely be another favorite to long list of actresses who have portrayed Elizabeth, Sam Riley's Darcy is rugged and dashing. The loving and quiet nature of the most recent Darcy played by Matthew McFayden still lingers, but Riley exudes his rigid exterior more. His Darcy is a militant skilled and focused to slay. Burdened with heavier measures than what his heart desires, he carries a gentle nature with subtlety and mystery. Instead of just being restricted by their pride and prejudice, Bennet and Darcy are turned on by each other's agency to kill. Their chemistry together makes them another lively, memorable reiteration of this timeless couple.

Given more ample liveliness to the classic romance between Darcy and Bennet is other awesome and impressive list of characters: lady boss Lena Heady as Lady Catherine, one of the best trained zombie killers with a crew of ninjas, the charismatic Jack Huston as the dubious yet charismatic Mr. Wickham holding a grudge against Mr. Darcy, the innocent-yet-not-to-be-underestimated Bella Heathcote as Jane Bennet, and handsome Douglas Booth as the shy, clumsy Mr. Bingley. And, there's a special mention for Matt Smith whose transformation as Mr. Collins brings humor and quirkiness as the misplaced and unwanted pastor with his sights marrying one of the Bennets.

Director and writer Burr Steers handles what Austen fans love of her famous work and brings a modern twist. Though it might feel strange at first that these two genres have been paired together, Steers doesn't go for the campy route or a straight-up parody; he gives all of the characters agency to their own destinies, and to defend themselves and their loved ones. The action and zombie kills moves seamlessly in the middle of the romance and comedy. As the Bennets and Mr. Darcy manage the threat of zombies at every turn, we're put right into the middle of their relationship and the action. It feels like we're right on the battleground with them; we're allowed to watch some kick-assery unfold as well as a timely courtship. Pride and Prejudice and Zombies is a great mix of Austen's story with an extra splash of blood and guts.
at February 06, 2016