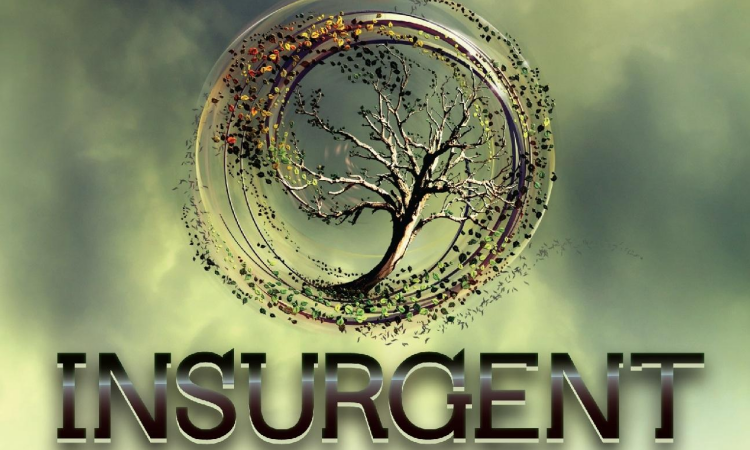 By the looks of my previous review for Divergent by Veronica Roth (the predecessor to this book), it would seem that I would not touch the rest of the series with a ten foot pole. Fortunately, or perhaps unfortunately, because a girl crush for Shailene Woodley commenced followed by a decent adaptation, I somehow felt compelled to put myself through continuous torture. So, here is my review of Insurgent.

Picking up where the last book finished, our heroine Tris and her beau Four have ended the first round of drug-induced simulations where Dauntless (brave faction) were brainwashed to commit mass genocide against Abnegation (selfless faction). On the run from Jeanine Matthews, head of the Erudite faction (intelligence), the lovebirds and company escape to Amity (peace faction). Their next move is to discover why Matthews is hellbent on capturing the Divergent - society members like Tris and Four with special traits that make them immune to her mind-controlling substances. (Go with me on this!)

In a future dystopian world, Chicago is the main setting for Roth's story. Fenced in to incorporate five dramatically-different factions, the personality traits seem straight out of Harry Potter Sorting Hat with the characters' adventure taking notes from The Hunger Games. Part of me was grateful that my wish was fulfilled for the sequel to develop it's worldbuilding. Understanding how the science of the technological advancements, and a few of the actually unexpected plot twists, was by far the most improved aspects of the book. By far this was the best improvement to the story (as well as the necessary character development included below).

However, the other part of me wished the writing technicalities lived up to the worldbuilding.  Most of all the prose seemed to repeat itself. I can't count how many times Tris was at "the edge" of crumbling to pieces to symbolize an emotional breakdown or a stone sat in her stomach to emotionalize guilt. Dangerous situations in which the characters found themselves on the "brink of new information that could solve everything" usually lapsed into a catch-up meet and greet in every faction. New characters were often introduced within a few pages that would go on to reappear later to help out Tris in some way. The story would pause, let Tris break down, reignite her fears and determination - then presto, the goal of discovering why Matthews was trying to implement the serums would be back on track.

A major issue I had with Divergent was the dialogue which was cringe-worthy and the inability to tell characters apart - because of the lack of diverse communication. All of the characters' personalities ranging from younger teenagers to adults continued to collide into snarky sarcastic behavior. For a series about intrinsically different personalities, everyone sounded the same. A rolledex of the same insults and comebacks seemed to appear every other page. "Whatever" signified the end of a cutesy quarrel. Two characters that came from the same faction would mock each others' similar traits - repetitively. Tris and Four would gravitate towards honest believable exchanges before the dialogue would return to mush. Relating back to the prose, which did provide more than several chapters of substantial consistent storytelling and exposition, the written tone felt like Roth was capable of accessing deeper material but didn't or wouldn't flush out.

What made the story perhaps the most beneficial was Tris Prior continuing to be a truly refreshing dystopian leading character. I can often see Prior verus Katniss Everdeen (The Hunger Games) are the subject of debates for best leading heroine of the modern YA age. For me, Tris wins hands down. Inhabiting three of the five personality traits that make up the futuristic Chicago; selfless, brave, and smart, Tris is multifaceted in that she makes her own decisions by her own emotions and doesn't do so with the hopes of gaining her loverboy's approval. For the strict confinements that are offered in the setting, it's pretty awesome that she is capable of being more than a one-dimensional character - which everyone else seems to be. There's a constant struggle of standing up for herself and being brave for others in the most dramatic of crises.

Furthermore, I found Four to be a well-developed boyfriend/leading male character. What I find most frustrating in YA fiction is that couples run together on the same dependence trope; giving each other ultimatums, making it seem like the other person's love is all they have to live for. Sometimes they are forced to be so in love they lose their own identity. With Four and Tris, there is a magnetic friendship that blooms into an adolescent romance. Tris is not constantly wondering if what she does or says will lose the attraction he has for her. Four and Tris' emotions and decisions are separate, and where they collide in understanding each other's motives and their violent, chaotic circumstances. But rarely does Four hold Tris emotionally hostage, which makes their relationship an even better partnership.

Divergent was by far one of the most challenging reads to undertake in a long while. Its story and characters seemed so foreign to me, the mega-phenomenon this series has grown to be failed to live up to the hype. With Insurgent, and now thoroughly engrossed with the movies and characters, the world-building factor and main character's evolution was satisfying, even if the writing failed on so many levels. Perhaps even moreso, the material made me question if this story was worthy of three books to reach its conclusion. Is the material strong enough for me to sit through a reading of the third and final book Allegiant? Unlike my first review I truly may just wait for the movie.