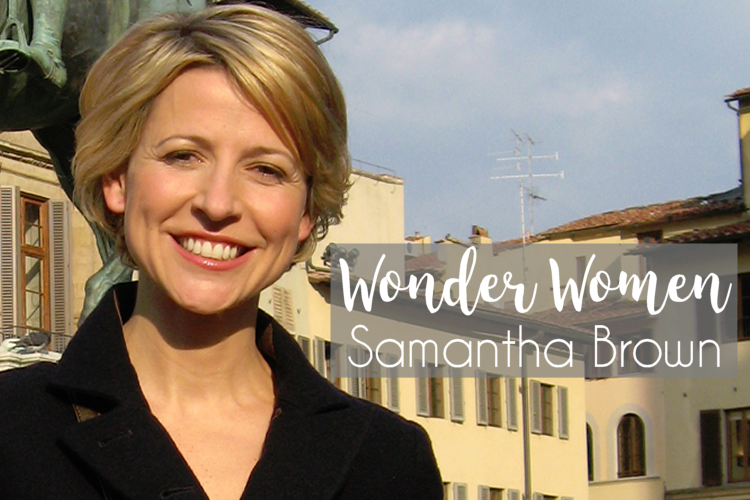 Before Travel Channel became obsessed with men gorging on food and treading into limited access sewers, a female host took the network by storm. Her exuberant personality and sense of humor were something I was obsessed with a teenager. Her name was Samantha Brown.

Brown started out with giving tours and staying overnight in ritzy houses and in the tropical United States. Having no previous experience in hosting for television, Brown had been found through The Travel Channel through an audition tape. Luckily the network knew they had someone really special on their hands, and Brown grew to be the first lady of on-air travel.

With her next series Great Hotels, Brown scoped out the North American landscape staying at the finest hotels and exploring the local culture. You couldn't help but fall in love with her. She was the girlfriend and best friend you wanted to hang out at home and abroad. Her love for chocolate and ice cream was your cravings. While you wished to be bouncing on beds, playing games in a hotel lobby, or venturing outdoors on nature escapes or connecting with the locals, she did it with charm and wit.

In her second series titled Passport to Europe, which lasted two seasons, Brown traveled the Euro-world in style, hitching up in places like London, Germany, and Italy. In another series, Brown took temporary residence in Mexico and China. Her willingness to try new things took us sword dancing, rollerblading through Paris at night, snorkeling, and dog sledding.

Her travels weren't always full of smiles. Behind the camera journeying across the world brought long schedules away from family and friends, and going to explored places on her own with a small camera crew. But rarely did those struggles ever come across on-screen. Brown was always a down-to-earth people person.

Forging on with her travels, she never failed to show us everything that could be done in every corner of the world. She taught us the best sights to see, how to save money to travel locally, which hotels to check into and during which season. Her honesty came through when she ate something atrocious or wanted to try something again and again. Meetings with tour guides and special-interest instructors were with a keen interest and open mind. With more series to come like Passport to Asia and Great Weekends, Brown clocked in more than a 160 hours of television. And, she remains one of the sole female hosts to ever grace Travel Channel and really do it all.

She was funny, smart, and down to earth. Brown is one of the few - next to only - explorers (once) on television who didn't have to chow down impossible gargantuan meals in two minutes or live on an island by herself for sixty days and peruse all her survival skills. This woman-sized bubble of enthusiasm proved that we can have an adventure any place we travel, especially with a few spoonfuls of style, humor, and a smile.
at September 09, 2014