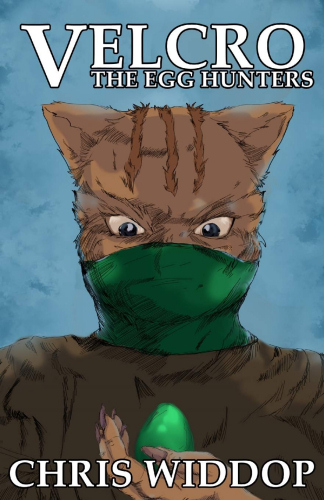 Four books ago, I was introduced to the world of Velcro: The Ninja Kat by Chris Widdop. His anthropomorphize world of animals using magic and the ensuing conflict of corruption was a real treat to start reading. Now, his series is  coming to a close with the fifth book Velcro: The Egg Hunters – which he gave me a copy of in exchange for a review.

Following Tails Mask's widespread fiery attack that had brought an abrupt end to the Polluted War, the world has fallen into chaos. And in the ensuing confusion, many key players have gone mysteriously missing, including the villainous Tails Mask, as well as our hero, Velcro the Ninja Kat herself.
Having now seen just how powerful and dangerous Magic can be in the wrong hands, war has once more been reinvigorated, as a new military faction known as the Phoenix Corps has arisen with the express task of eradicating all remaining Magicians the globe over, and have set their sights on those harboring solace in the Country of Rath. And meanwhile, several bands of bounty hunting Egg Hunters have also set out in order to cash in on the heads of the Magicians that have gone into hiding.

As every sequel picked up relatively where the last installment concluded, The Polluted War asks enough open-ended questions about the next phase of Velcro’s journey. The Red Easter left all of her friends in various locations and in the throes of heated one-on-one-battles, letting everything that they fought for burn down seemingly for good. As the country hangs in the balance the end of one war and the origins of possible another, there's time now to ask what is peace and how can that be accomplished instead. Similar to not necessarily starting where the last book left off, Widdop starts to thread new ideas of what it means to start over. I expected The Egg Hunters to pick up where it left off, but it defies a lot of expectations by not necessarily letting the same battle continue on forever.
Since the plot consistently set Velcro and her allies in motion to thwart evil schemes, The Egg Hunters features a new crew rising to take the place of The Devil Corps but it doesn’t feel like its repeating the origins of the war Velcro and her friends just faced. One of the common threads of the series so far was its theme of war and how it divided or united the characters – how it affected their decisions and actions to cast revenge or avenge friends and family, or believing in a cause that turned out to be nothing but empty promises. Without war so much at the forefront as much as it was in the past, this book is able to slow down more. This next part of his world seems like it has another fight up his sleeve of his characters, but it’s also more reserved than the one that came before.
In many ways, this final book feels like a return to the start of the series when we were first introduced to Velcro and she was just starting to expand her knowledge and use of magic. After the previous books explored the feud with her brother Charlie and the training to become a masked vigilante, she’s now able to try to understand her own role with the resurgence of pro and anti-magic rhetoric, and as well as what she can do with magic now - to cast revenge for what happened with The Red Easter, to end magic for good, or save her friends by staying in the shadows. Since I’m trying to avoid spoilers, I’ll just say her discovery of how her disappearance had an impact on the world, and how her mythos continued after she was seemingly gone, was a real treat to see the typical defeated hero thrust back into their world of saving turned on its ear. Widdop’s always managed to create good backstories for his wide range of characters and ramping up all the stakes between them. With that part now taking more of a backseat, he’s able to continue building his heroine and give her a heartwarming and emotional end to her arc.
While Widdop definitely shows a gift for expanding Velcro's story, it is difficult to depart with how the story began and continued to tread for the past few books. Since the beginning, a lot of supporting characters, locations, and origins of magic were introduced and explored - a fair portion of them earned their own backstories and raised the stakes in overall the story. In contrast, The Egg Hunters really dials it back from that approach. Many of the minor characters might have just been smaller cogs in the whole wheel, but they kept the whole machine well-oiled and running. Their disappearance or just the allusion of what happened to them fits the story he was telling. But on the other hand, it's difficult to feel like their arcs matched up to hers as completely and satisfyingly.
Velcro: The Ninja Kat series offers a fun adventure for readers wanting to look for a unique short set of books to dive into but offers a complete world. Sometimes it’s difficult to get involved in a series because the ending doesn’t always live up to the hype.But Widdop’s story expands and never loses sight of his ideas. Each installment added a new action-packed layer to his world-building and made the battle for magic (or against it) worth it. I enjoyed reading the series and to see the story conclude for now.
Rating: ★★½☆
at December 18, 2020 No comments: 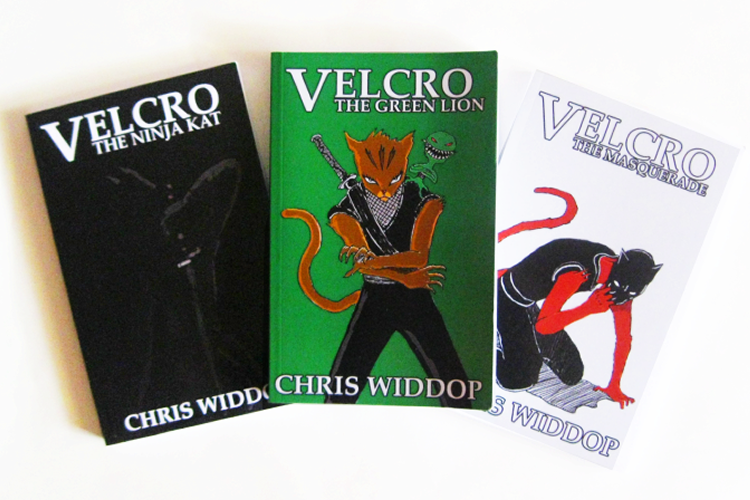 With a harrowing protagonist and imaginative setting, Velcro: The Ninja Kat by Chris Widdop brings a fun twist to the vengeance-driven hero.

This spirited adventure centers on The Ninja Kat, a feline who's vowed for vengeance and justice against the Devil Corps, a military organized that's waged war against its own people. For what reason, only the Ninja Kat knows. In a bid to stop the carnage before it's too late, the masked vigilante thwarts their evil schemes and infiltrates nearby regions to make alliances with survivors and give aid to prisoners. The tale's sequels The Green Lion and The Masquerade ventures further along Velcro's journey as the world becomes more aware of the Devil Corps. In this strange, new world, a hero and fellow inhabitants are pushed to join in the fight or succumb to evil.

Even though I'm not a seasoned reader of action/adventure, and couldn't remember the last time I've read a series with anthropomorphic animals, Widdop's trilogy was so engaging, it was easy to leave my bookish genre preferences behind. His cast of characters, who exhibit human intelligence and emotions as well as animal traits, are distinct from each other as they uncover dark, magical secrets.

That is most obvious with Velcro. The crusade to bring peace throughout the Country of Widows clashes with morals on how to do it. Obstacles along the way aren't just physical like combat, they're emotional. Every book guides Velcro to keep to the course and also look within. Being a warrior isn't just about combat, but coming to terms with a deeper meaning of revenge and justice, when to refrain or use the skills that have been learned, and the importance of family and sacrifice. From discoveries of magic, infiltrating the government, and providing help to flailing survivors, a moral compass lends itself to explore compassion, regret, frustration, impatience, and most of all, ambition and determination.

War affects everyone, and each supporting character has their own personal battle too. Velcro leads the revolution in an animated world populated by hamsters, bees, spiders, dogs, and rabbits - to name a few. A variety of personable and fun supporting characters are delightful, creepy and whimsical like Honey, a sassy and determined friend of Velcro's, to an evil scientist Spider. The Devil Corps may be attacking their own people, and the damage they cause may be their downfall. The victims they manage to leave behind turns many into fighters or allies, each one having their own distinct personality and motives.

The enemies Velcro duels against are clever and fascinating. In terms of world-building, if there is something that could be improved, it might be geographic details, but that's honestly just nitpicking. Every place Velcro treads are notably different by its culture and how Velcro is treated by enemies or allies, but it was a bit difficult to grasp where Velcro was at times without backtracking the story a little. Widdop's use of world-building gives villages and characters enough contrasting personalities where all of his threads tie together nicely.

Velcro: The Ninja Kat series offers thrills, humor, and heart. Widdop's adventure is perfect for readers looking for an enjoyable, short set of books to dive into. He's an engaging writer who comes into his own and improves every book. He has a true keen sense of describing what his characters are doing in bite-sized details.  Each installment picks up where the last one ended and takes you on an action-packed, offbeat journey with unique characters.  (And has inspired me to get a cat to call Velcro too!).