Summer has officially arrived! 'Tis the season to go to music festivals! With the sun shining and blue skies above, it's an awesome time to jam to our favorite bands or new performers. Perhaps one of the most famous music festivals is Coachella. It's notorious for it's appearances by celebrities as regular music fans like us. Though this year's concert has already passed, there's always next year to think about not only what the concert will have in store, but also my dream concert. Gina at TickPick teamed up with me on a collaboration of my dream music Faux-chella festival. 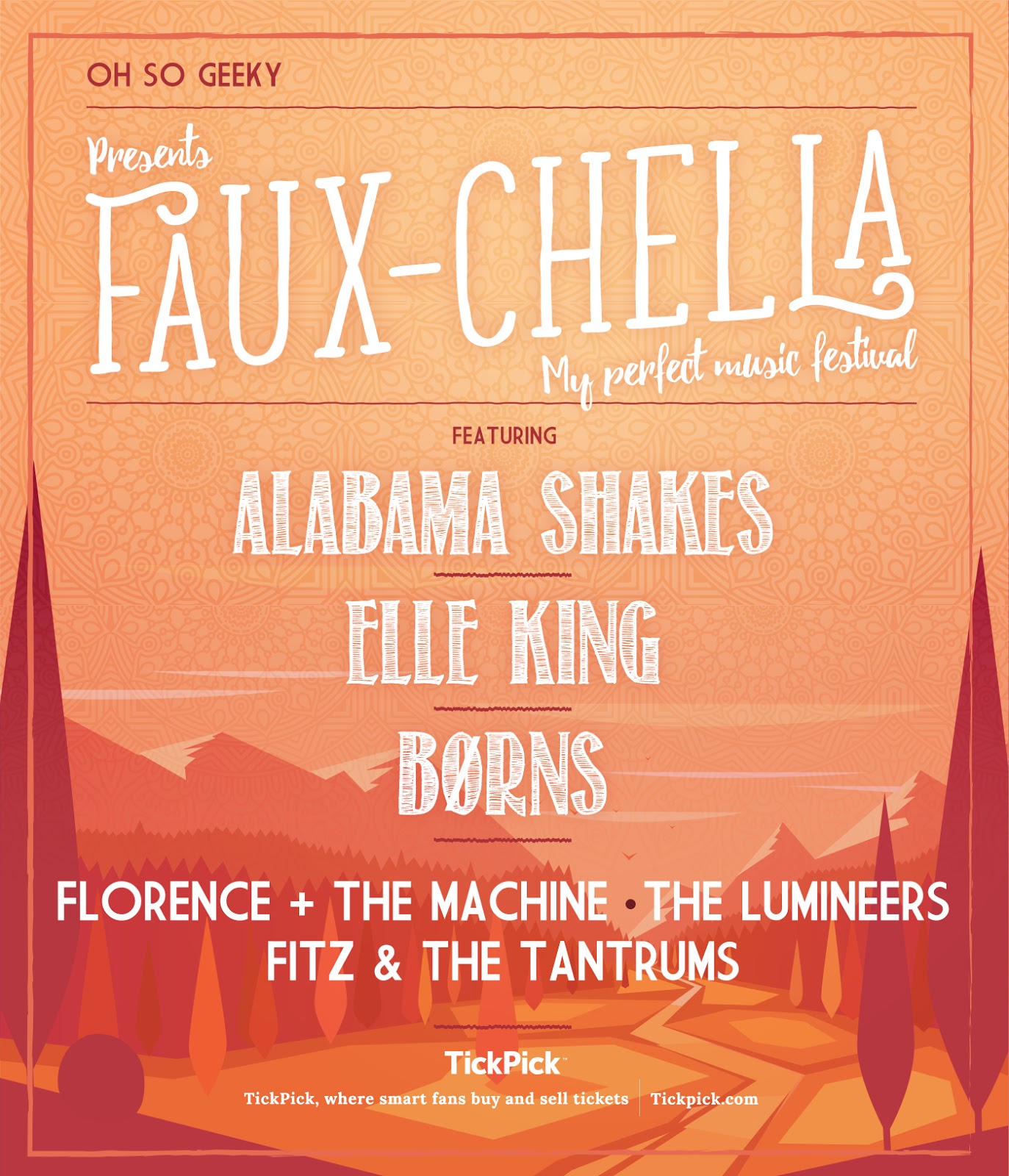 Tickpick's designers customized this awesome poster with my imagined headliners. My music tastes vary all over the place from swing and the 1940s to classic rock. Having attended an amazing concert by Florence and the Machine last month, she was certainly at the top of my list. A solid rock vibe are taking over my playlists these days.

These are the bands I picked: Alabama Shakes, Elle King, BØRNS, Florence and the Machine, The Lumineers, Fitz and The Tantrums. I've included each band and my favorite tracks that would be awesome to hear.

Lead singer Brittany Howard's sound and her band first blew me away as apart of the Silver Lining's Playbook soundtrack back in 2012. Their style and especially her vocals are ridiculously soulful. Don't Wanna Fight is just one of several tracks of of their most recent album Sound and Color that I love listening to over and over again. Check them out - don't fight me on this. They're awesome.

King's Ex's and Oh's has become a big radio hit as well as her other song America's Sweetheart. What can I say? Her voice just freaking kills it. Though Alabama Shakes' ruminations about relationships and life are a bit more soulful but nevertheless honest, I love how King is bringing back exciting, bad-ass (female) anthems to rock again.

I don't really remember how or when I first came across Borns, but it's been one of my favorite discoveries as of recently. This band isn't like the first two on this list, which might add some spunk to a concert of my dreams. Like King, Borns has a very cool eighties-esque sound and one of the coolest songs around right now.


Florence and the Machine - Ship to Wreck

This selection was a bit of a cheat since I just saw her live and can't get over her concerts. Her ability to perform is like mixing Janis Joplin and Queen - she is that good. Smaller stages really do her a disservice because at full voice and barefooted, Florence can't be tamed. She runs around the stage and unleashes an amazing energy. She gives an unbelievable concert, so she would no doubt be a good addition to my dream Fauxchella.

Similar to Alabama Shakes, The Lumineers caught some big air play with their hit song from Silver Linings Playbook called Ho Hey. It's no doubt a great song and very catchy. Some of their more recent songs like Ophelia are great follow-ups to the shout-along feel that initially made them such a big hit.

Fitz and the Tantrums - The Walker

Fitz and the Tantrums is just such a groovy band. I love how they sound very rockish but also have a pop vibe to them. As the lyrics goes, The Walker just makes me want to break out and dance. One of their other best songs is definitely the totally groovy Moneygrabber. The music video has a very old-fashioned sixties feel while also remaining hip and modern rock. Basically, I would give them (and every artist on this list) all of money to see them in person!

A big thanks to TickPick for reaching out to me for this project. It was a lot of fun and definitely got me letting loose to some awesome beats for the summer. If you're going to pick up tickets, check out TickPick's official website information about concerts and the NFL.