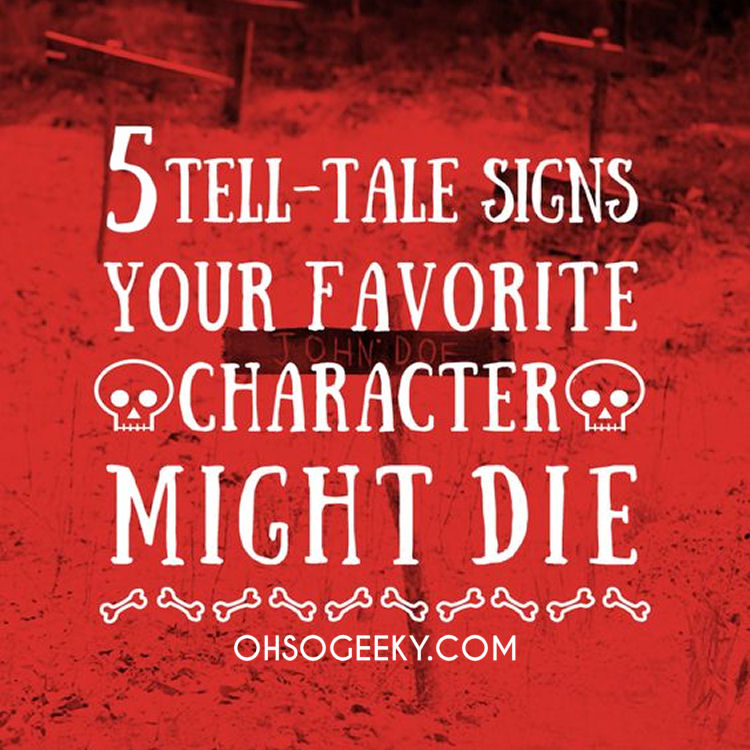 From Game of Thrones, The Walking Dead, Pretty Little Liars to Lost and True Blood, a character's death is something all fans have experienced.

Episode after episode we tune into where our favorite hero or baddie is headed next, or we're interested in an extra floating around in the background. Our love and curiosity beckon us to ask: What will become of them?

Unfortunately, most of the time it's an inevitable death. One day a television show writer is playing Pin-A-Plot on a Character. An intriguing anti-hero or conflicted sidekick or mysterious henchman faces something more terrifying than the True Death, a machete, or a stray bullet: it's the stroke of a pen or a tapping of the keyboard. Through the power of Lady UnLuck and the writers' trying to drive us crazy, someone we love/love-to-hate has gotta say good-bye, au revoir, adiós, sayonara!

To save geeks some heartbreak, here are five signs our favorite characters might die.


1. They Have an Opinion
A conflict arises. The good guys or baddies deliberate what to do next. Our favorite character suddenly has a minimal vote and gives an opinion. It lasts for more than one line of dialogue, gradually moves into logic reasoning and pleading for their voice to be heard. Oh my gosh, we realize: he or she walks, talks, is actually a human being and not an ignored extra. Well, they might as well not have spoken at all. They're not disposable but not immortal either. As they ride off into the sunset, the writers usually just wrote off their amazing storytelling potential.

2. They are Given a Monologue
Every once in a while our chosen favorite interacts with a main cast member. It may be to swap a joke or two. Until they suddenly have a monolog. We learn about how they were raised and if they were a single child, or how to load a weapon (before said character is hit with a 'stray' bullet'). For five minutes they may actually have a human-to-human connection with someone; we start shipping and thinking of meta, and is that the sound of canon? Next thing we know, all hell breaks loose - the bad guys invade the good guy's territories. Our favorite gets stranded in the wild to be pigeonholed into their demise. That monolog sends our feels into a tizzy and makes us wonder what could've been.

3. They Want to Contribute
The story is heading into a dark zone. Characters are threatened by outside forces or their own personal inner demons. A light's gotta come through their bleak future somehow. Enter our character, and he or she wants to contribute - they want to be a respite from emotional turmoil and create positivity in the collective miserable whole. ADIOS, happy helper. Thanks for your kindness and generosity, but no thanks - sadly, you're not gonna be around long enough to see how much you had an impact on your friend's journeys.

4. Their role is actually reduced
Very few and rare reasons call for a character's involvement to suddenly lessen. Some reasons include an actress is pregnant or a personal emergency for the actor arises. But also, there is just a plain and simple truth that the writers or actors lose interest. A character pops up time and time again. We may even know a thing or two about their actual personal history. But suddenly they'll re-emerge in a flash and do one or a combination of the things above. Try not to get too attached; the writers could just be setting us up for a dose of reality - nobody is safe.

5. Foreshadowing comes a knockin'
So our peeps are hanging out with the main crew. They speak their minds. They've had monologs. Their own arcs progress and they contribute to the progression of other arcs. Then we're watching an episode, and flashbacks are a central part of their story. It's like a whole episode is just for them.OUR DREAM COME TRUE. Then, we notice all the little details we've cataloged over the years coming back at full force. It's almost like a visual obituary of their time on the show, how the character's guilty conscience is trying to teach a lesson of reflection or change. Like a redeemed jerk or a good guy treading to the dark side (they have cookies after all). It's called foreshadowing. The pavement of their arc is gonna end at the edge of a cliff and the only thing we'll have left is Memory Lane. Good-bye awesome person. We love you.


*sobs wildly into the void where my beloved favorite characters have died*
The list is far too long.
at March 20, 2016 No comments: