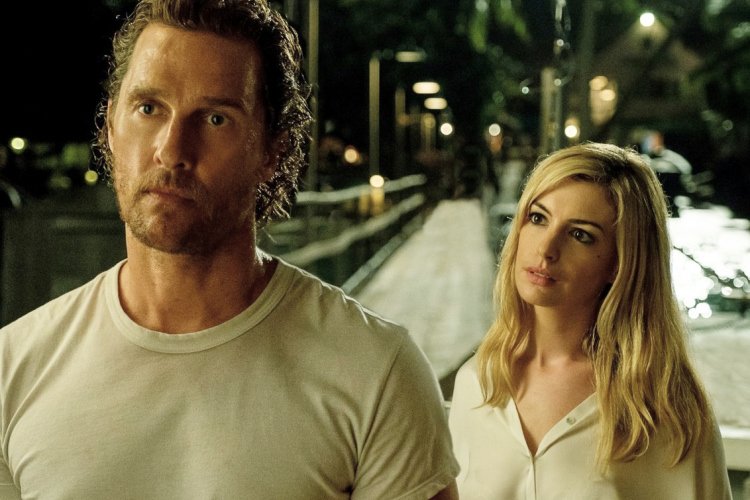 Promo tours often limit actors from not leaking intricate or even obtuse details about their upcoming highly-anticipated films. Persuading audiences to see their project based on a trailer, the director's skills, and chemistry between the leading stars is a tricky sell and not something I envy. This marketing spin, usually left up to Big Important Movies like action flicks and superhero sagas, has surprisingly worked for Serenity - an independent film with big names and an even bigger plot twist that's proving sometimes not shouting the story from the rooftops is worth its weight in tuna - I mean, gold.

Everyone on Plymouth knows everyone else’s business. There’s no hiding who is sleeping with who, the gossip between tourists and locals, and if someone’s venture immediately starts to flail. Plymouth is claustrophobic, to say the least, for Baker Dill (Matthew McConaughey) -  a washed-out fisherman obsessed with catching tuna, drowning in the memories of his son and struggling to make ends meet. When his ex-wife (Anne Hathaway) comes into town offering him $10 million dollars to kill her current abusive husband, Baker must be led away from a tempting payday that could push him further into madness.

The magic about Serenity is that, like a lot of action flicks and franchise players, it’s best to not know a lot about it. Director Steven Knight, either by pure happenstance or sheer insanity, wrote a script that has a lot of things going for it – both good and bad. Namely, the story starts off relatively simple – a hard-knocks guy trapped on a tropical island where everything should be easy breezy, and it’s not. Like the insufferable heat, Baker is suffocating in "paradise" where every day becomes more lucid than the last. It's within the film's most normal moments that the tension builds as Knight implores the cinematography and mood into a modern noir.

And, then eventually the plot grows out of control to instill the twist that has everyone talking. The plot’s swerve, in all honesty, is not that hard to miss. As Baker howls, shrieks and wallows in his sorrows and obsessions, Knight slides in clues and even straight-out tells you where the story is heading. Every shot aims towards growing intrigue (okay, maybe not the ones of McConaughey in the nude but still there's something to take away from those too) and holds the promise that if the audience just stays with it a little longer, they're in for a surprise. Thus, audiences shouldn't feel shocked by a film that is blaring what is going to happen, but all that suspense transforming into true hard facts is a real mind-boggler. It’s a storytelling switch so audacious that one is left not only trailing the breadcrumbs to assess everything the film had laid out before, but also coercing you to pull back the layers of a very surreal onion that only increases the confusion and captivation.

If the film is stripped of the plot twist, Serenity contains a level of tremendous detail by its head honcho in Knight as well as a genuine commitment by the cast. Between Baker falling apart over mysterious visions about his son to Knight's tonal shifts with Plymouth's idyllic aesthetic, the film makes for an adequate drama on its own. In particular, McConaughey and Hathaway give performances that reach varying levels of Nic Cage’s looniest cinematic moments as well as their career bests. Other supporting stars have more trouble finding their place in the story as they only make-up parts of the whole and nothing more. The film has its own set of ambitions to be "a serious film to be taken seriously", but also seems to confuse authentic mystery with being over-the-top.

To be honest, Serenity could've become a drop in the ocean of bargain bin movies – it has all the right elements of a convincing contemporary noir and then it becomes something else entirely. It's hard to think about its stylistic intentions without feeling like some parts of it was a massive prank the audience stumbled upon. Without the instant-reactions of social media, there's a true chance this might've not gained its notoriety so quickly and for its cult potential to live on. And that’s sort of the blessing and crux. Knight worked some kind of vision into his idea that might be worthy of watching once and forgetting about, or revisiting in five years with the sense that this movement of enthusiasm for the film was fun to be a part of. It breaks the rules and defies expectations in the most unexpected ways, leaving 2019 into a rocky but awesome start.