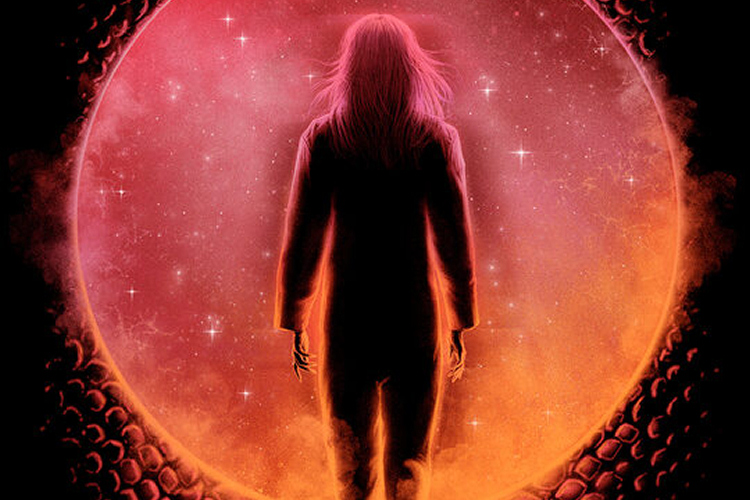 We’ve been looking towards the cosmos to understand ourselves since the beginning of time. For those who have venture closer than admiring space from afar, abductees or the families left behind try to make sense of what happened and why. It can be a tumultuous experience struggling to believe their own encounters and facing skeptics who question them.

In writer/director Jefferson Moneo’s latest film, Aurora (Camilla Rowe) has been searching for answers since she was a young girl and witnessed her mother inexplicably disappearing into the night sky. Years later as an adult, she’s compelled to join a UFO cult The Cosmic Dawn seemingly finding the community she's needed until she discovers its leader Elyse (Antonia Zegers) is not who she seems to be.

Aurora is the central anchor to take us through the effects of her life before joining the group, her indoctrination, and the escape attempt afterwards. Largely a model before turning to film, Camille Rowe only has a few credits under her belt, but it's tough to not imagine roles eventually coming her way. She balances Aurora’s naivete to be swept up by the group’s unusual practices with desperation of seeing her mom again through a cosmic connection. It helps that she is joined by Emmanuelle Chiriquí as Natalie – a mysterious young woman who recruits Aurora into the group – and her husband Tom, played by Joshua Barge. Both are mindful to tread their roles ambiguously enough to doubt whether they are merely pawns in Elyse’s web or using Aurora for their own gain.

At the core of Cosmic Dawn, Jefferson Moneo (who’s own experience inspired the film) searches for meaning towards why someone would join a cult and what they’re looking for – answers, community, a part of themselves that’s been lost. He also infuses the world-building with details that are both familiar with other cult-inspired films and well-executed on their own. This deep sense of personalization flows throughout that makes you question the world around them, but not necessarily the characters' trauma. His vision - styled with a synth-led score by Alan Howarth and MGMT, cinematography framed in bold neon, and drug-induced hallucinations – becomes a downright trippy experience.

Even though the cast and production brings sufficient substance to the story, they are hindered by its style at times. The film primarily anchors to Aurora’s vulnerability as she searches for her mother in others, primarily Elyse as the group’s leader. Antonia Zegers invites a warm maternal presence that shows what Aurora sees in her, but her leadership also comes across as a rough amalgamation of ideas rather than a fully-realized process to fully flesh out their individual circumstances. More than that, the script divides into exploring Aurora both joining and leaving the group. Consistently flash-backing, or flashing-forward, becomes gradually haphazard to adding suspense to Elyse’s intentions and what’s to become of Aurora.
Cosmic Dawn features performances and production design that hold your attention, mixing the awe of Close Encounters of the Third Kind and trippiness of Midsommar. Moneo isn’t asking or plodding for viewers to come away believing in aliens – only to explore the plausible after-effects to those who encounter them. His plot and style is led astray at times, struggling to juggle the atmospheric sci-fi elements with drama. Aurora’s emotional journey might be divisive for some but ultimately engrossing enough for the concept to be worthwhile.

Thank you to Cranked Up Films for providing a screener. Cosmic Dawn is available to watch on-demand and limited in theaters.