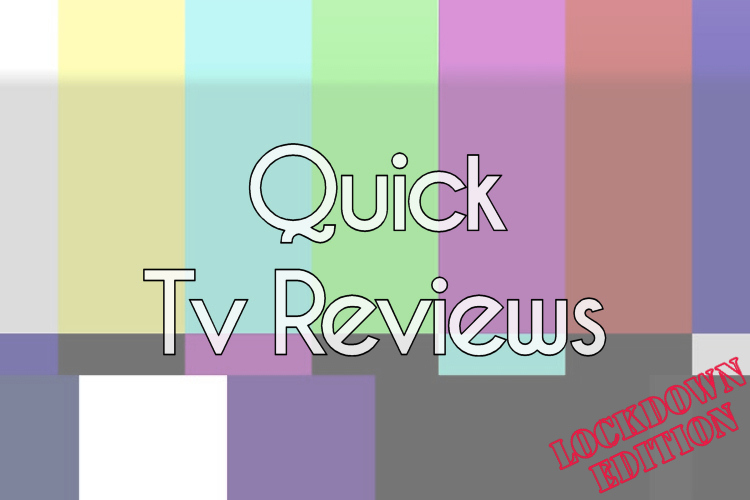 For a while, it looked like we had a bit more hope for things to "return to normal." It seems like most people are going back to their regular lives. But since I live in Florida, I'm still very much on lockdown and squeezing in more shows than I did last year.
Below are my quick reviews of shows I've been watching lately - spoilers are included for  The Walking Dead, Loki, Ted Lasso, Russian Doll, Outlander.

A group of survivors search for safety and security as zombies take over the world.
My sister and I started rewatching this last year to freshen up our non-existent survival skills when COVID was supposed to be a "two week" lockdown. But, we became too depressed and stopped. Now we're back to re-watching, and damn, I miss this show so much. I've been reminiscing a lot, and looking back at reviews made me realize that my attempt at analysis wasn't as terrible as I thought.
TWD is currently hitting its final season, but I'm not bothering to tune in. I've only caught pieces here and there, and it's laughable now. The best part about the horrible writing is that you can pick any given moment to decide when the show ended. I choose season 6 - "No Way Out". In my mind, they rebuild Alexandria until Rick's death and then Carl takes over with Judith, Michonne, Maggie, Glenn. ;/

After stealing the Tesseract during the events of Avengers: Endgame (2019), an alternate version of Loki is brought to the mysterious Time Variance Authority (TVA), a bureaucratic organization gives him an ultimatum: get erased from existence for variating from the timeline or stop a greater threat.
Tom Hiddleston is fun to watch in general, but I've never been a huge Loki fan. Since my interest in Marvel has waned since Chadwick's death, I didn't have high hopes for this and mostly tuned in for Gugu Mbatha-Raw. The cast was well-rounded and balanced through all of the subplots, and the direction had a genuinely unique style that fit Loki. One or two episodes were purely filler, but I enjoyed the story. The real clincher was Jonathan Major's performance as Kang the Conquerer - it was the perfect combo of eccentric and egotistical; sympathetic and manipulative. I just love everything he's in, and this was no exception. I've watched the finale a few times and can't wait for the next season.
The absolute lack of gifs for Kang, especially on tumblr, is blasphemy.
Rating: ★★1/2☆

Small-time football coach Ted Lasso is hired to coach a professional soccer team in England, despite having no experience coaching soccer.
Ted Lasso is a phenomenon right now, but it feels like yesterday when it was the little show that everyone was telling each other to watch. The puns and Lasso's optimism makes it funny enough, but there's always a nice level of conflict in every episode for dramatic effect. And, I think, it found the same formula that worked for the first season of Stranger Things by twisting tropes around with more layers than what we see on the surface.
The second season hasn't managed the same level of pacing as the first. It could be tighter featuring all of the different arcs. But it's trying to explore the ensemble's potential and not as bad as a lot of critics say it is. There are several episodes to go, and unless something drastic happens, I'm still excited for its third season.
Rating: ★★★

Nadia is on a journey to be the guest of honor at a party in New York City. But she gets caught in a mysterious loop as she repeatedly attends the same event and dies at the end of the night each time -- only to awaken the next day unharmed as if nothing had happened.
I don't know why, but I expected this to be pretentious and repetitive since I often heard it described as Groundhog's Day. It has the same time loop premise but grows to be more sci-fi and mystery like Black Mirror or The Twilight Zone. Natasha Lyonne and Charlie Barnett have a lot of great chemistry together, but I'm hopeful it won't turn into a romance and ruin their quest to end the time loop. Every episode wasn't necessarily gripping, but by the end, I needed more answers ASAP. Even though it was renewed for a second season and has been delayed because of COVID/scheduling conflicts, the first is satisfying on its own. It works either way for me.
Rating: ★★★

After serving as a British Army nurse in World War II, Claire Randall is transported to 1743 by visiting a portal at the Standing Stones. To survive the 18th Century, she marries Jamie Fraser, a strapping Scots warrior caught in the throes of the rebellion against the British. Their further relationship merges across time as they try to navigate both the past and future together.
I finally gave into the temptation after wanting to watch this for years. It's the first time I've been swept away by a fantasy / historical romance, and the initial two seasons didn't disappoint. I was so impressed by how much the stories intersected between timelines, and perspectives between Jamie and Claire. I tried to avoid spoilers but after catching a few here or there, but I anticipated that the series would never quite pick up after the second season - where so much of Jamie and Claire's relationship deepens. I can't put into words how much the moment giffed above marks a period when I knew the show would not have that same passion or conflict anymore. Caitrona Balfe and Sam Heughan didn't necessarily carry the show in the beginning as they had a lot of elements working on their side. But it definitely can't carry the hot mess of season four and five. The writing feels so fanfiction-ish now, which is an insult to fanfiction.
Of course, I got into the fandom when it only has two seasons left to premiere in 2022. It'll be interesting to see what happens - especially since I haven't read the books. I'll probably re-watch quite a few episodes in the future. But I wished the show maintained the magic of the earlier seasons from beginning to end.
Rating: ★★☆
at September 08, 2021