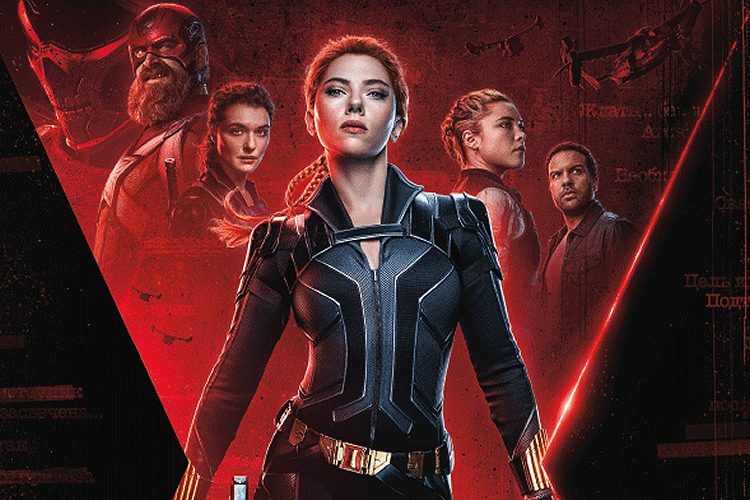 It's hard to believe that Black Widow was a central part of The Avengers team for almost ten years...and yet we learned so little about her. She wanted to wipe the red out of her ledger. Something happened in Budapest. She was forced to go under a hysterectomy under her 'training' in the Red Room, and was always cleaning up after the boys. Now, after her permanent demise in Avengers: Endgame, Marvel finally put through her own solo flick. It's a shame that we finally learn more about Natasha Romanoff, but that it feels too little, too late.
Set after Captain America: Civil War, Natasha Romanoff (Scarlett Johansson) teams up with her long lost sister Yelena (Florence Pugh) to take down the Red Room's mastermind Dreykov (Ray Winstone) and his number one assassin The Taskmaster (Olga Kurylenko). As SHEILD hunts Natasha down for overstepping The Accords, she'll have to confront the darkest parts of her past to finally clear her name with those who love her most.
At its core, it's an action flick and character development project. Natasha does what she's always been capable of doing - kicking ass. Nothing seems to keep her down for long as she adapts and morphs into different fighting styles and always one step ahead of her rivals. As many fans complained throughout the fandom about how Natasha - a mere mortal among superheroes and an arrow-flinging pal - could mortally survive wars against aliens, Black Widow takes her strengths and applies them to the inth degree. The movie has plenty of big action scenes, however, it pushes the envelope to believe she could survive falling from 6 story buildings, endless ambushes with opponents five times bigger than her, an exploding ship falling out of the sky without a parachute. Sure, it's fun to see Natasha's abilities on display, but at what point did the film forget that she is still a human spy.

More than that, it didn't really build up the villain or their cause. Halfway through, the film semi-forgets there's a cat and mouse chase going down. Ross is supposed to hunting down Black Widow for violating The Accords' agreement, but he's only a bookended plot device. The TaskMaster appears when another action moment is called for and for her connection to Dreykov to be revealed. Nat and Yelena are trying to save countless women from being puppets to a literal god in the sky, but we don't see the Red Room in action except in brief montages. Their hunt for Dreykov ends up being a gigantic CGI fest, but it doesn't exactly feel earned.

Black Widow works best when it focuses on Nat as the person behind Black Widow. Opening the film with her younger self and Yelena (kudos to Ever Anderson and Violet McGraw) being sold back to the Red Room was the smartest decision. It's effective, it pulls you into the girls' relationship and sets up how much their broken bond needs to be healed for both of them to move on. Scarlett and Florence, and their arcs, were the most palpable emotional throughline. They didn't just have great chemistry, they led you to believe Natasha was the bigger sister who let her down; left Yelena lost about what was real about their upbringing; and how forced to being assassins left a real destructive burden that they knew was affecting fellow widows.

Surprisingly, Black Widow has the ingredients of Mission: Impossible Fallout, but Marvel doesn't follow the recipe. Fallout centers on Ethan's guilt over risking his wife's safety and always being tasked with choosing one life or another. There's nothing he can do to make things right in the world, he has to just keep trying to make it safe on behalf of the IMF. It's his mission and he chooses to accept it - because of that his friends battle alongside him. The action sets Ethan after one loose end to another, but it's slick enough for you not to notice the formula. Black Widow actually, again, hits a lot of those notes but it's just not as slick. If the comedy or action had been tamed down, it would've been.
The main difference between the two is that Marvel doesn't respect its lead to do her justice as Fallout did for Ethan. No matter how great Natasha's arc is, their sorrow and struggles are constantly watered down with sarcasm. For every heartfelt insight into the pain of Nat and Yelena's childhoods, the awkward dynamic between David Harbor as a "sympathetic" misogynistic dick Alexei and Rachel Weisz as brilliant or kooky scientist (I don't know which) Melina becomes forced. Where Cate Shortland's direction with Johansson and Pugh feels personalized to them and their dynamic, Marvel inconveniently swoops in to add brevity and hope we'll love sassy characters because they're sassy. Not only does it make films uneven and predictable, but it's tougher to accept her finale when it's just an add for the next spin-off.


"It’s not spoken outright, but it is implied they have erected a gravesite for her in Ohio, where they spent that time, which I think is touching and great and emotional. Then, I loved taking that poignant moment and flushing it down the toilet with Valentina blowing her nose, just intruding on this very personal moment. That kind of stuff is my favorite in the world." - screenwriter Eric Pearson

Objectively, Black Widow is Johansson's best work in Marvel. We get to see so many sides of Nat - ingenuity, cleverness, resourcefulness, broken hearted but without a love interest, determination, resilience. Despite my reservations above, I was proud to see her pulling out all the stops against Dreykov, even if this wasn't one of Ray Winstone's better performances.

But that admiration comes to a screeching halt too. Here's a bad-ass queen who just came off mending fences with her sister, saving her parents, rescuing millions of women around the world from being mind-controlled machines, sacrifices herself for humankind in Avengers: Endgame.... *deep breath* She finally gets a headstone that commemorates her WHOLE arc from "daughter to sister to Avenger" and Julia Louis Dreyfuss's awful miscasted character Valentina blows a snot rag right in the middle of Yelena grieving at her sister's resting place? just to plug her arc for the next phase?

Similar to the ill-timing of Alexei's jokes throughout the film, the writing simply can't pick its moments, which has a terrible affect on the final impression the movie leaves us with. The post-credit scene becomes a complete contradiction to the rest of the movie that is hedging on GIRL POWER to the max. It's kind of mind-boggling that Marvel didn't think through any other ending - like a private Tony-like funeral with the other widows showing up and Yelena to pay their respects? And then pulling the playbook out of Captain America: The Winter Soldier with Valentina handing Yelena the file on Barton saying, "You might not want to pull on that thread. But you should" and walking away like a boss? Between this and The Falcon and The Winter Soldier, Valentina is coming off as goofy Veep knock-off, not powerful. If she's supposed to be Marvel's version of Viola Davis's Amanda Waller reigning in all of these dysfunctional personalities for an alternative Suicide Squad, they are falling hella short.

For all of the film's better elements, Marvel is becoming more focused on the future than honoring the present, even past, storylines. The film's haphazard mix of action and character drama can't alleviate Marvel's easter eggs like why she changes her hair or gets new clothes - and doesn't 'ruin' the film enough for me to totally dislike it. But the post-credits scene lands after multiple jokes made at Nat's expense that she wasn't a real Avenger. Arguably, Iron Man 2 and Avengers: Age of Ultron used Nat divisively too, but The Avengers as characters never treated her like she wasn't worthy enough. Somehow Marvel, this writer, the director, even Johansson bypassed how the ending punctuates those jokes, even as no other characters cheapened Tony's funeral or Steve's ending. After everything she accomplishes, Marvel can't tell the difference between using humor to alleviate tension or using it at a character's expense - especially the film's final appearance.
Honestly, I shouldn't be surprised - it took 20 movies to bring Captain Marvel into the mix, only to completely botch her hype in the end. Like so many great female characters in cinema, they have so much potential but they're wasted. At least, Martin Scorsese and Marvel have that in common, I guess.
Rating: ★★☆
at September 29, 2021