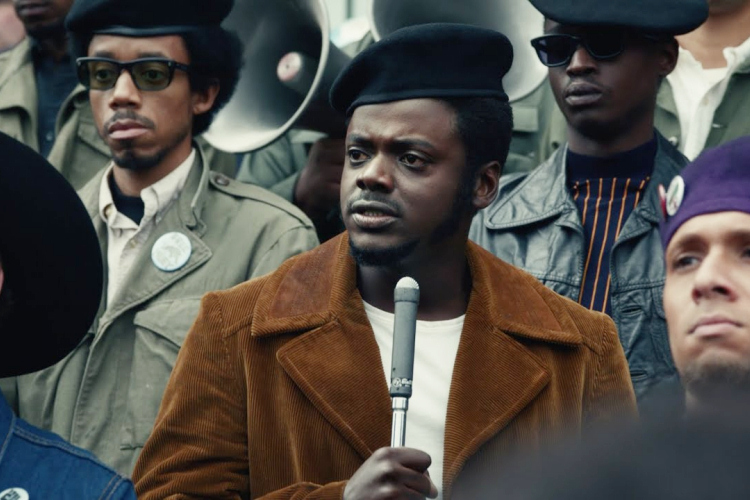 17-year-old  William O'Neal (Lakeith Stanfield) is recruited by the FBI to infiltrate the Illinois chapter of the Black Panther Party led by Fred Hamptom (Daniel Kaluuya). As O'Neal gains acceptance and camaraderie with Hampton and his comrades, the FBI pushes their campaign to criminalize Hampton that ultimately leads to his assassination. Similar to Candice Frederick's review, I couldn't stop thinking about or comparing Judas and the Black Messiah to The Departed - its potential similarities and stark differences.

Both films share the core structure of the spy story. For the former, William goes undercover into the Black Panther Party, and is continuously upended by his involvement. Even though William believes he is the rare example of an undercover agent, there are others lurking all over the place, forcing him to watch his back and always feel threatened by the potential of blowing his cover or having someone blow it for him. With The Departed, centered on the 'rats' trying to dismantle an Irish mob boss ring, there's always a lingering question and conflict of how the entire operation will fall apart. Despite the split focus on multiple characters and their motives, there's always a steady tension of three things - the suspicious intentions of multiple agencies trailing Costello, the true identities of cops surrounding him, and if Leonardo DiCaprio's frenzied character can maintain his sanity until he's free (which he will never earn). You never quite know what anyone's next move is, and everyone feels like they're fallen into a never-ending trap of cat and mouse. No matter how many spies we follow or twists the story takes, the leads are what glue you to both films.

And, Judas and the Black Messiah also features enigmatic performances by the cast. Without Lakeith Stanfield as William, it'd be hard to grasp the struggles how much his efforts as an undercover agent weighed on his conscious (an act that ultimately led to his own suicide). The BPP is nothing like how the FBI paints it as a terrorist group, leaving William to continuously lose himself in upholding BPP's activism as well as facing the consequences of his actions as a desperate act of self-preservation. There's always a sense of him looking over his shoulder even when he isn't. Playing opposite him, Daniel Kaluuya electrifyingly masters the enigmatic energy Fred had with not only his comrades but to convince the most racist groups to join their cause because the system makes enemies of us all. Other notable supporting roles includes Dominique Fishback as BPP member, poet, and Hampton's partner Deborah Johnson, and Jesse Plemmons as Roy Mitchell, O'Neal's FBI Special Agent handler.

Where Judas and the Black Messiah differs from The Departed outside of the cast and core plotpoints is how the script and direction unfolds in jagged spurts. As much as the former tries to piece together the patchwork of William's motivations, and showing the impact Fred has, the plot constantly loses its footing with uneven editing. Locations, characters, and story progression are spliced together without much context for what's taken placed between two differing moments. Supporting characters are revealed as agents, but there's no real throughline in who they are before or after their identities are discovered. Additionally, there are interview clips and real footage juxtaposed throughout that feel out of place and take you out of the film's uneven flow. All of these things were avoided in The Departed, in credit due to the superb editing by Thelma Schoonmaker, building up the ensemble as much as possible so you get a full grasp of all of the moving pieces, and not having to provide more historical context as a biopic. But Judas and the Black Messiah carries the burden of having to explore more of what's at stake for William and Fred, connect the past Civil Rights movement to the present Black Lives Matter movement, and give context to the time period on its own. It doesn't leave a lot of room to take its time, especially developing the stakes between Roy and the FBI versus William, Fred, and the BPP. The former, the antagonists, become much more like clumsy puppet masters rather than a racist system with an agenda, so much so that Hampton's murder doesn't quite feel like betrayal between the two comrades, and it doesn't quite put into context the structural integrity Fred established - a lasting impact of his loss for generations to come.

Biopics such as these shouldn't be laid out completely in layman's terms or like a Wikipedia page; obviously creative choices are made to make history come to life. And, the timeline between William and Fred could play out perfectly like an intricate thriller biopic. But even the most fragmented films are able to even out the role of an ensemble with contrasting motivations or non-linear timelines. It doesn't feel apt to say that Judas and the Black Messiah isn't as good as I thought it'd be considering that its existence is a victory for so many Black stories that Hollywood refuses to tell, and it was one of my top films I'd been looking forward to since 2020. However great the performances are, director Shaka King's film is just too muddled and leaves too many loose ends leading up to its tragic ending to support them the way it should.