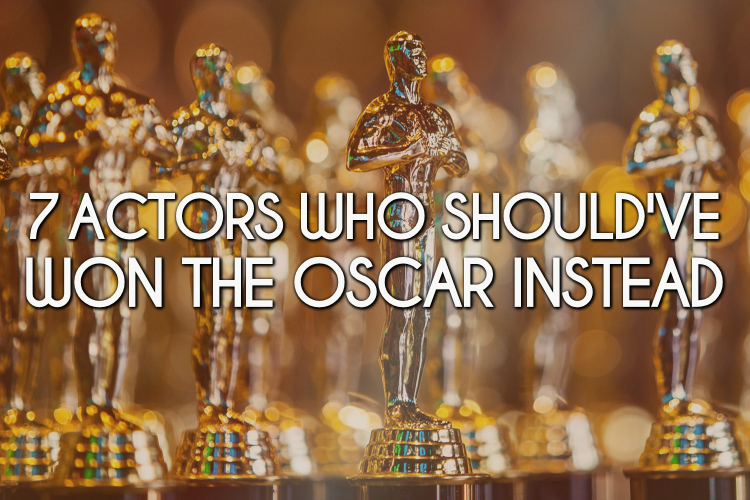 Every year movie buffs root for their personal faves throughout the award show season. Though we might disagree on who should win, history and hindsight often reveals when other performances were worthier of recognition. In celebration of trying to figure out this year's Oscars odds, I thought it'd be fun to revisit several recent ceremonies and pin down who won versus who should've won.
Which Oscar winners in the past do you think should've won? Share your thoughts in the comments below.

It might be a case of separating the art from the artist, but there are often elephants in the room when it comes to which movies or individuals the Academy Awards has or hasn’t recognized in terms of social issues. The 2017 ceremony became a stark example. As the #MeToo movement in support of fighting sexual harassment and abuse picked up more, allegations against Casey Affleck for sexual harassment contrasted actresses and survivors’ calls for accountability and to believed as victims. Based on merit alone, Affleck's performance is commendable but Washington alternatively commanded his on-screen presence more effectively - a role that he slipped into after performing on stage and helmed as both lead actor and director of the adaptation. But the lack of support for Washington vastly highlighted the irony of Hollywood’s support for those movements as they gave Affleck a standing ovation upon winning.

Best Actress in A Supporting Role (2016)

While I wish all of my 'should' picks actually won, this choice comes down to personal taste the most. Jennifer Jason Leigh's character Daisy goes toe-to-toe with the rest of the male cast in Quentin Tarantino's The Hateful Eight, where eight strangers hole up in an isolated cabin. She holds her own as against other heavyweights like Samuel L Jackson and Kurt Russell, and Daisy is a formidable woman that the western genre doesn't feature enough. Her rugged and brash performance earned more nominations across the board than the film's overall production and cast. Meanwhile, Alicia Vikander's role isn't all that memorable in The Danish Girl, which was lauded as an Oscar-baity film.

Who Won: Gary Oldman, Darkest House
Who Should've Won: Daniel Kaluuya, Get Out

Jordan Peele's Get Out is arguably one of the finest films of the 21st Century, if not all time. Its ability to fuse horror with comedy and social commentary is just as strong as Darkest Hour's ability to put audiences to sleep with its languid exploration of the prime minister's earliest days against Hitler's rise to power. Kaluuya's breakout performance will go down in cinema history for molding into Peele's vision and making it come to light. While Oldman had an iron grip on that win as a veteran star, Kaluuya was often painted as a newbie with a bright future ahead - which we see now is true. But of all the picks on this list, I think we'll still be questioning how Kaluuya didn't pull out ahead here well into the future.

Reese Witherspoon mostly rose to the top as America's sweetheart starring in rom-coms until her leading role in James Mangold's tepid Johnny Cash biopic Walk the Line. Her role of June Carter Cash showed audiences that she can tapped into drama, but as we've seen recently with her roles in Wild and  Big Little Lies, she's only really now starting to hit her stride. Obviously actors grow and evolve over time, but in comparison to other Best Actress winners from years past or future, her performance doesn't stand out a lot. Comparatively, Keira Knightley also began her steady career as the period-films queen starring in everything from a pirate king to a duchess. Her performance as Elizabeth Bennett in the beloved 2005 adaptation of Jane Austen's Pride and Prejudice is arguably one of her best in the genre and career best so far, and easily overshadows the influence of Witherspoon as a Best Actress winner.

Who Won: Leonardo DiCaprio, The Revenant
Who Should've Won: Matt Damon, The Martian

It's no question that Leonardo is one of the top actors of his generation and has delivered countless performances over the course of his career. However, the Oscars has never been quite kind to the actor, often snubbing his best roles (The Departed, Catch Me If You Can, Titanic) and nominating him for weaker work (The Blood Diamond). As much as Leo's win for The Revenant felt warranted after years of going unrecognized, his performance was dragged for how hard Leo always tries to get the Academy's attention. Meanwhile, Matt Damon arguably gave a better performance in The Martian as Mark Watney - a character who is difficult to strike a balance with his limitless supply of dry sarcasm. Yet Damon managed to achieve it with thoughtfulness. One can only imagine if Leo had won for a role that didn't feel like it was fixing a history of snubs instead of the role itself.

Who Won: Sandra Bullock, The Blind Side
Who Should've Won: Meryl Streep, Julie and Julia

When The Blind Side was first released in 2009, it was highly criticized as perpetuating the white savior trope. Now, years down the road, the film still hits chords of cringie-ness, to say the least. Though her performance contrasted the comedy roles she was known for up to that point, it's remained questionable if her role in Gravity two years later was more deserving. Similarly, Meryl Streep followed her hearty portrayal of Julie Child with a cold turn as Margaret Thatcher in The Iron Lady. The former missed out, but the latter earned her a third Oscar win - a choice at the time that was panned since it overshadowed awarding Rooney Mara in The Girl with the Dragon Tattoo and Viola Davis in The Help (a role the actress later regretted). Switching Bullock for Streep could've easily fixed this year's flub.

It's tough to root for the underdog at the Oscars, but Mickey Rourke's heartbreaking performance in The Wrestler made so many do just that in 2009. While Rourke's understated portrayal of a veteran wrestler who will do anything to capture his old glory days in the ring, Penn went the more showy route with his portrayal as Harvey Milk and becoming another prominent example of a straight actor playing a gay icon. On top of which, Rourke came out on top at the BAFTAS, Golden Globes, and Independent Spirit Awards, where he won against Penn. Why the Oscars decided to dropkick his win at the last second will forever be a mystery.

Best Actress in A Supporting Role

Anyone who's watched Hillbilly Elegy might wonder why I think Glenn Close will win come Oscars evening. After all, she has earned the "prestigious" title of being nominated for a Razzie and Academy Award for the same role. The main reason is that the Oscars love to hand out 'career' statuettes - to honor a veteran actor who has been nominated before but hasn't won in years. Close is the closest nominee who fits the bill across all categories, having lost eight times before - most recently for The Wife where Olivia Colman became the upset victor. Though Maria Baklova has consistently won this year, and it's likely she could end up getting this too, it would not be surprising if Close sealed the deal at the last second.
Another slighter reason is that the Oscars seldom awards performances for comedy, which Maria delivered in spades for Borat Subsequent MovieFilm having improvised for hours alongside Sasha Baron Cohen. Only time will tell if the Oscars finally diverges from its love of drama.

Best Actor in A Supporting Role

Who Should Win: Lakeith Stanfield, Judas and the Black Messiah

Who Will Win: Daniel Kaluuya, Judas and the Black Messiah

Though Judas and the Black Messiah puts Lakeith's role in the center of the action and should be nominated in the leading category instead, members of the Academy threw a curveball by honoring him as a supporting role. For almost every major award show so far, Daniel has swept this category left and right. And this marks the first time the two performers are facing each other. Including Lakeith could change the game for this race, highlighting him for a role that he's been sorely snubbed for almost the entire award show season so far. Perhaps it's time he does win, although no one can definitively say Daniel shouldn't win either.

Best Actress in A Leading Role

Who Should Win: Andra Day, The U.S. Vs Billie Holiday

Similar to the Best Actress in a Supporting Role category, the Leading Role category is not a stranger to surprises too. At the Golden Globes, Andra Day faced heavy competition against frontrunners Viola Davis in Ma Rainey's Black Bottom and Carey Mulligan for Promising Young Woman, and took home the prize. In subsequent award shows where one or both actresses are not shut out (mostly Andra), Carey's taken the lead. Where Promising Young Woman has been able to garner awards from film festivals to major circuits, The U.S. vs Billie Holiday was panned for everything excluding Day's performance. Her singular prominent win is enough to make me wonder what might've been.

Best Actor in A Leading Role

Who Should Win: Chadwick Boseman

Who Will Win: Chadwick Boseman

Chadwick Boseman's delivered stellar performances since the beginning of his on-screen career. It's with deep regret for so many that the late actor passed away last summer before his swan song role in Ma Rainey's Black Bottom was released on Netflix in December 2020. His performance is a stunning testament of all the work he has done previously and all that he could've achieved in the future. Though Riz Ahmed for Sound of Metal is also a top contender, Chadwick's won this category consistently this past year. It's unfortunately expected that his wife or family will accept the statuette on his behalf.
at March 26, 2021