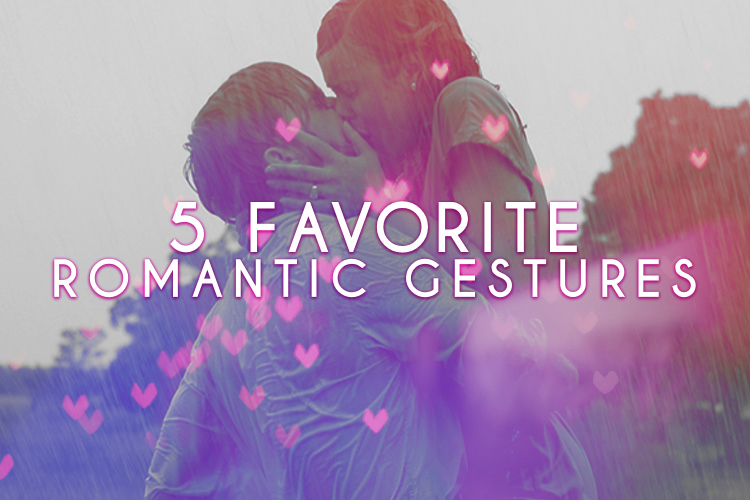 Romanticmovies have the power to make us believe in the power of love or at least give us high expectations for the gifts we can share on Valentine's Day to show how much they mean to us. 'Tis the season to overestimate what Cupid has in store. So I thought it'd be fun to share my favorite romantic gestures from movies...that has set some impossible standards.

Page number 28 - Portrait of a Lady on Fire

In the midst of their romance, Marianne sketches a portrait of herself in Héloïse’s copy of Orpheus and Eurydice’s story. Years later, after their initial encounter and Héloïse is married with children, Marianne sees a portrait of Héloïse at a gallery. The corner of a book on page 28 is peeking through her hands – the page number Marianne used to sketch her. Though their romance has faded into a memory, Héloïse still holds onto her and vice versa. A lot of historical lesbian films go all-out for making us yearn for the characters to end up together, and the ending could soften the iron-clad heart of even the most staunch homophobe.

Trip To Amsterdam - The Fault In Our Stars

An Imperial Afflection by Peter Van Houten helped Hazel Grace Lancaster feel understood and validated throughout her cancer diagnosis. But the book’s cliffhanger left her in the dark about what happens to the characters. Even worse, the author became a recluse who does everything he can to stay out of the spotlight or gleam attention, even ignoring fan mail. When she befriends Augustus Waters,  he's able to contact Peter and use his ‘cancer perk’ wishes for them to visit to Amsterdam and meet the author in person. The trip does not go as planned at all, but the true answers Hazel seeks – if she should let someone love her – is answered not by Peter, but with Augustus and his resounding affection for her despite his own cancer diagnosis. Talk about making sure the time we have left truly counts.

Can you imagine waking up and Sarah Paulson is in your room? Okay, it might not work for you as much as it does for me...But in the case of a romantic gesture for Carol, it's not too shabby. Carol has to leave her lover Therese behind to deal with her husband threatening to take full custody of their daughter. Surely, Carol hated having to leave Therese abruptly with a break-up letter, but she does send along Abby to help her drive home to New York. Abby is not the most heartwarming person to greet Therese, but again, it's Sarah Paulson.

Every look Colin Firth delivers in Bridget Jones’s Diary is worthy of a romantic gesture list– he invites Bridget to interview his high-profile clients even though she’s a laughing stock; he helps her recook her birthday dinner when she’s destroyed it; he buys her a new diary for them to start over after he accidentally reads some of the nastier bits she had written about him. But a major highlight of their relationship comes after a disastrous couple’s party where Bridget is left humiliated as the only single person in attendance. He tells her that despite all of her ‘imperfections’ he likes her just as she is. What a real relationship is all about folks.

Everything Noah does - The Notebook

For a good portion of the early 2000s, Ryan Gosling ruined all men. His and Rachel McAdams’ performance in The Notebook inspired women to want more out of their relationships. And, I don't blame us. When Noah finds out that Allie’s been accepted to Sarah Lawrence, he’s willing to break up with her so her future isn’t ruined. After they break up and are apart for years, he writes a letter every day for a year and builds the house she always wanted (with an art studio for her). And then decades into their marriage and in their older age, he reads the story of their life while she’s suffering Alzheimer’s in the hopes that she'll remember their past.  I mean, I did make a whole list just to use a gif of Ryan with that beard and in the rain, but also like... #RelationshipGoals
at February 14, 2021