Tesla (2020) struggles to bring the inventor's life to light 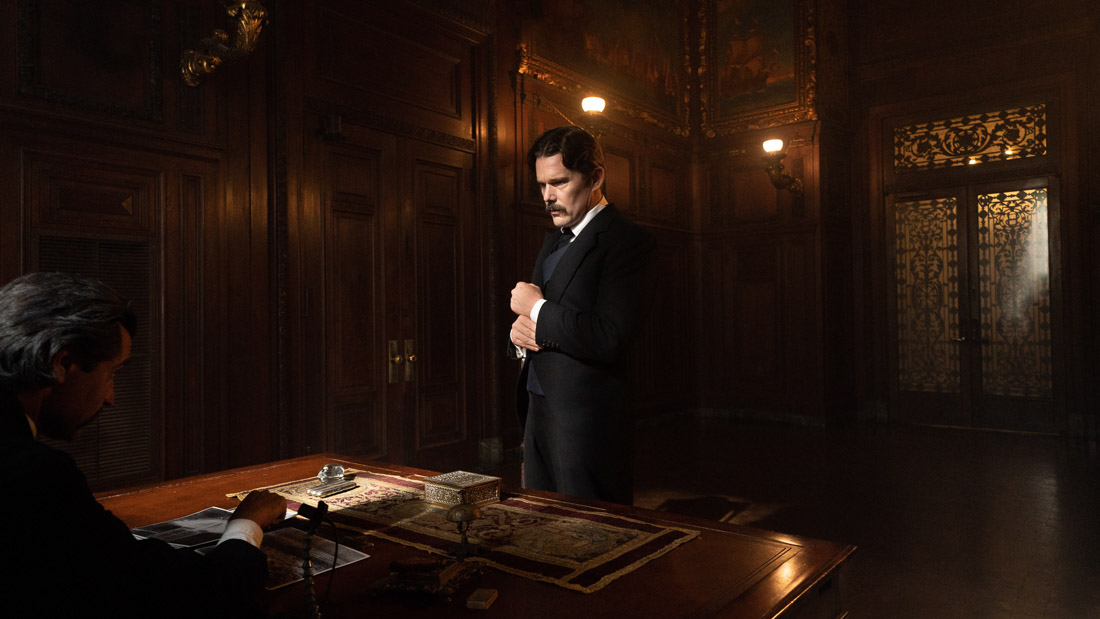 History's made up of pioneers who have transformed the world as we know it. Too many remain overlooked, forgotten to time and standards or traditions that now seem archaic today. And, movies often a way to shine a light on those whose stories are recognized by their peers and admirers. Engineer and inventor Nikola Tesla, who continuously mounts a resurgence in film and television, finally gets the biopic treatment, but it's difficult to discern if it isn't as garbled as his own legacy.
Outside of his own inventions, the Serbian-American scientist Tesla (Ethan Hawke) is perhaps most recognized for his feud against his former boss and American inventor Thomas Edison (Kyle MacLachlan). Here, the film loosely explores Tesla's life from the 1893 World’s Fair and onwards, marking the differences in their career and their war on electrical currents - Tesla's alternating current sytem vs Edison's direct current electric power.

Director Michael Almereyda doesn't generate the most conventional films - if you've seen his work before, you'll go in knowing how off-beat his perspective can be from the plot to the production choices. If you haven't, it's a challenge to piece together his myriad of choices to tell this singular story - one that admirably steps out of the box from traditional biopics but fails to know when to air restraint.

Though the story itself should be expectantly straight-forward, Almereyda's approach will be the most divisive aspect. Its plot is unlike even the most surreal dramas, practically starting in the middle of Tesla's life and his immediate rivalry with Edison, and then expanding all over the map. While films in a non-linear fashion aren't always challenging to watch, Tesla doesn't hold back with directing its focus between Tesla, his acquaintances, partners, romantic interests, etc. Primarily, the plot is intermittently interrupted by daughter of JP Morgan Anne Morgan (Eve Hewson) who acts as a tour guide of who's who in Tesla's world. Once you get a hold on your bearings on the main story, the film switches the direction or Morgan drops by to clarify which scenes are fact or of Almereyda's artistic license. Her inclusion feels less like the film is making room for an observer giving you the scoop of Tesla's work and more as a diversion from adhering to a A to B to C, etc. biopic.

It's difficult to call this film quirky, or unique, in comparison to other films and leave it at that. Almereyda offers enough curiosity to pique your interest and see what he has up his sleeve next. He regularly interjects the film with little details that step out of the traditional mold, and even the time period it's set in - a scene with Sarah Bernhardt entering a club comes more like a scene out of John Wick than a late 1900s period piece; Morgan using a laptop to show pictures of Tesla, Edison, and other supporting characters on Google; Tesla crooning to a Tear for Fears song at karaoke. It's little nods like these that give the film its edge, but blurs the line between an extraordinary vision and throwing everything at the wall.

Where the film gets its bearings the most is Hawke's performance. Not much is known about Tesla - that's perhaps that the internet is for - and Hawke manages to encompass an emotional insulation about him that you want to follow. Kyle MacLachlan is steady as Thomas Edison, but in regards to both characters, the film struggles to dive deep beyond the loose personalities you may have heard of online or in social studies class. Though their frenemyship is the central thread of the story, and each have their own artistic and capitalist demons to face, the stakes don't feel high as they could, making them both as much of a mystery before you see the film as much as you do afterwards.

Similar to the real Tesla and the mystique his legacy has endured over the years, the film can be given its due by how it blazes its own trail. The latter aspires to be a visionary, becoming one of the few that tackles the microscopic 'anti-biopic' biopic genre. As its plot makes daring detours, it's free-wheeling approach hinders more than amplifies. Hawke's performance ties the film together on his own, but it's a flickering portrait that struggles to fully illuminate Almereyda's subject.

Rating: ★1/2☆☆
Please Note: I was provided with a screener to watch this film and provide an honest review. Telsa is available in theaters and watch at home via digital or cable.
at August 27, 2020