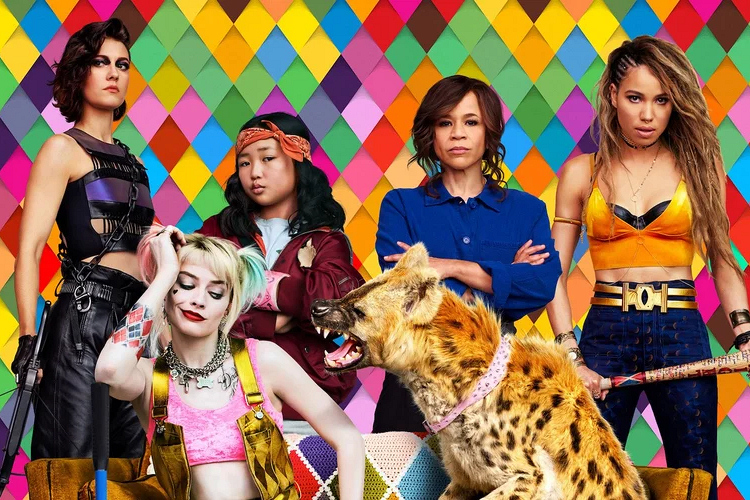 Since director Patty Jenkins's Wonder Woman successful run in 2017, the DCEU has been steadily rebuilding its reputation. With follow-up films like Shazam (2019) and Aquaman (2018), fans love or hate the direction of the studio’s franchises. Shouldered with keeping their winning streak alive and kicking off a stream of female-led films in 2020, Birds of Prey (and the Fantabulous Emancipation of One Harley Quinn) raises a little hell in the comic book genre and breaks a few glass ceilings of her own.

Harley Quinn (Margot Robbie) has broken ties with The Joker, but the immunity her relationship brought has now expired. Formerly under the protection of her ex's power, Quinn’s gotta fend off Gotham City’s worst nightmares when they come to collect. As her emancipation invites more obstacles than she bargained for, Quinn’s sets off a rebellious chain-reaction with teen thief Cassandra Cain (Ella Jay Basco), marginalized cop Renee Montoya (Rosie Perez), vigilante Dinah Lance (Jurnee Smollett-Bell), and The Huntress (Mary Elizabeth Winstead against a diabolical club owner Roman Sionis (Ewan McGregor).


Within the first several minutes of Birds of Prey opening with a retro styled animation of Harley Quinn’s origins, you know you’re in for a wild ride. At almost every turn for the first two acts, Birds of Prey flashes pizazz by breaking the fourth wall, adding hilarious animations, and rewinding the story to catch you up on how and why the Birds of Prey will band together. As Harley Quinn takes us in and around the city’s seedy underbelly while falling victim to her own worst instincts, the film becomes clear that it’s an action-packed character-driven vehicle where glitter and violence flies.

Though its performances are not the only place where the film shines, it is one of its best elements that set it apart from the comic book genre as a whole. Similar to Wonder Woman’s 72 year wait for her own solo flick, it’s hard to believe that a character like Harley could be so seamlessly adapted to the big screen, but here we are. Stepping out of her break-out role from the disastrous Suicide Squad (2016), she takes off the leash so many female characters are held onto and ropes us into Quinn's eccentric quirks and rollercoaster mindset. Animated, vibrant, hysterical, and heartfelt, Robbie goes full-force with her portrayal but still manages to make her as realistic as possible, and leads a film that would’ve been impossible without her.

With as many characters as Birds of Prey has, some will feel like the ensemble is squeezed in, which given the DCEU’s complete lack of foresight is understandable. Though Harley’s certainly the glue that holds the Birds of Prey clan together, the film doesn't rob too much of her female counterparts. Jurnee Smollett-Bell and Rosie Perez are given the most to work with in terms of developing wider character dimensions with their motivations and emotional arcs. Mary Elizabeth Winstead’s The Huntress comes into the fold a little too late in the story, but she still manages to hilariously work the hell out of what she's given. Ella Jay Basco’s Cassandra receives the most changes from her comic book origins, and is a joy to watch, but her role never quite feels like it reaches its full potential. While it feels like that the DCEU is waiting to use them more in a sequel, their individual arcs move as seamlessly as possible and feel like we're raising hell with them.

Where Birds of Prey struggles is its non-linear timeline. In order to give the film a personality only Quinn can possess and introduce her allies, the story is consistently interjected by Quinn to go over other plot points and key character moments. For the most part, it works to establish the Birds of Prey, but it also takes up too much plot from Sionis and his right-hand guy Victor Zsasz (Chris Messina). As one of the most violent super-villains in DC comics, there’s an anticipation to see him developed more that doesn’t entirely pan out. Everyone’s striving to stay out of his way and feel his wrath, but that’s really where the stakes end. Even though he is the key villain, and McGregor deliciously chews up the scenery, the stakes feel low compared to the numerous high-powered fight scenes – ones that are often Quinn or Lance against redshirts instead of Sionis. So this is not a grievance of a lack of male characters for the sake of female characters, just that the conflict doesn’t solidify him as a real threat as much as it could’ve.

With a comic book movie that has many moving parts as Birds of Prey, director Cathy Yan’s work refreshingly doesn’t adhere to a specific studio-produced formula. As much as its non-linear format is similar to Deadpool (2016), it feels very much like a natural extension of Quinn on its own. This credit goes to screenwriter Christina Hodson capturing the anti-heroine’s voice, allowing her to own her chaos in all of its madcap glory. Cinematographer Matthew Libatique also brings his incredible eye to the fight scenes and Quinn’s headspace in ways the comic book genre has never had before. The production itself creates another kind of Gotham City – one that is filled with metaphorical cages (production design by K.K. Barrett), bold wardrobes (Erin Benach), a bad-ass soundtrack, and incredible stuntwork (87Eleven). Even though the film goes all out in its visual style and storytelling, it still has a grounded center to tie it down. It’s got equal parts style and substance, one where women are raising hell, freeing themselves, and taking care of their own. Who knew emancipation could be this much fun?