The MCU is still reeling from Avengers: Endgame and probably will be for a long time. It's only fitting that the franchise starts moving on with the second installment for Spider-Man. Hitting theaters July 2nd, 2019, a much-needed and well-earned vacation for Peter Parker and his friends unravels some unexpected consequences from the universe snip-snapping back into place.

If you haven't seen Avengers: Endgame, it's a good idea to skip this trailer and post. Spoilers are ahead!


FIRST OF ALL, and yes this worthy of caps lock, WHO DOESN'T LOVE TOM HOLLAND? Just what planet are you from that you don't like him? Okay, now that that's out of the way, the trailer kicks off with Tom giving us a spoiler-warning, ironically, because he can't keep a secret to save his life from Marvel's No Spoiler Henchman. (On Jimmy Kimmel Live, he revealed he was told Tony Stark's funeral was actually a wedding.)

This official trailer pays off a lot more than the teaser released a few months ago, which showed us that Peter would be going on a simple vacay to Europe without his Spider-Man suit where chaos ensued anyways. (Plus Aunt May and Happy seem to have something going on).

The same premise exists here with a few more twists: namely, we know Tony has died in Avengers: Endgame, and that Mysterio is re-introduced as a foe-turned-friend who needs Peter's help. Nick Fury (Samuel L. Jackson) hijacks Peter's vacation, supposedly, because Mysterio (Jake Gyllenhaal) hails from an alternative timeline who is struggling to close new dimensions that were left open after The Snaps. That's about as much as the storyline gives us, but as Marvel fans we know better. So here are some easter eggs that might've been missed.

"Everywhere I go, I see his face."

Tony's face is literally everywhere. As anticipated, Peter's grieving the loss of Tony in Endgame. Which makes me scared about how Holland described one scene from his new movie as the audience feeling like they were punched in the face, and you know what, HOW ABOUT NO. 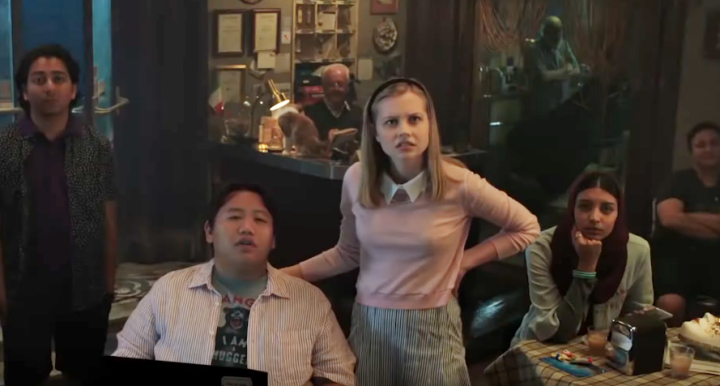 None of his friends survived the snap either

We still have to wait for official confirmation from this in the story, but if you haven't seen complaints floating online already, a lot of fans are saying the timeline in the movie is a plot hole.

The film takes place right after Endgame, which was set five years after Infinity War. Yet Peter and his friends still seem to be in high school. In order to not assume that they're supposed to be in college by now, we have to remember what Peter says to Tony when they enter the portals on the battlefield in Endgame: it only felt like a few hours after Thanos's snap that they were returning "alive". Wherever the "fallen" characters were during the Snap, we can assume they didn't age like the surviving characters did. Unless there's another reason for Peter and all his friends to go on the same trip together, we can count his classmates were among the Fallen too: Michelle "MJ" Jones (Zendaya), Ned (Jacob Batalon), Eugene (Tony Revolori), Betty (Angourie Rice).

The suit is still the same one that Peter used in Infinity War, but we're seeing it have new capabilities in the trailer like his spider legs shooting web at his enemies too. We don't know who Peter is fighting, but one of the guys is wearing a very flashy leopard suit and heeled boots, and could be a reference to a comic book character Kraven the Hunter.

It looks like Stark Tower is under renovation, even though we never really saw it get destroyed or fall apart in Avengers: Endgame. Some fans believe the stone statue on the lower building is in honor of The Avengers, but what do you guys think?

Happy is outraged that Peter ghosts Nick Fury. It's a nice throwback to Tony accepting Thaddeus Ross's call and then putting him on hold as he reads Steve's letter in Captain America: Civil War.

Compared to the teaser, Mysterio looked like Spider-Man's major villain, but here we see him acting almost mentorly to Peter. Fury introduces him as from another Earth-833, as the MCU introduces a parallel dimension in the Multiverse and as a visitor from The Snaps blowing a whole between dimensions. It is more than likely that Mysterio is not the cool 'Uncle' the filmmakers want us to believe he is. Though he is not a superhero, his abilities include special effects, illusion, hypnotist, chemist, and magician - all things that looks like Peter is fighting in the bigger action scenes. There's no telling the amount of min****s he is going to put everyone through, especially Peter. Personally, as cool as the Multiverse is, Endgame (stemming off Doctor Strange's first movie) did not do as well of a job explaining everything it entails like Spider-Man: Into The Spider-Verse. If it's not cleared up in the future like Far From Home, this could get super complicated too fast.

But I don't know if Fury wants to bring up space, given that's where Peter died and Tony was left inadvertently stranded to almost die....Also after being left out of a huge portion of the MCU and Endgame because other planets needed, I'm getting a little peeved that Captain Marvel is again "unavailable". 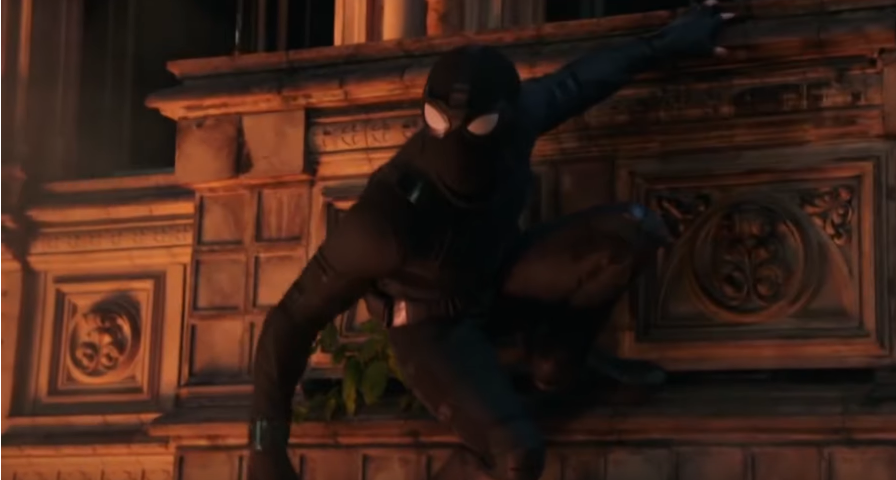 Coming Out of The Shadows

Given that Tony gave Peter a much-needed upgrade with his new suits, this is the first time we're seeing him go into stealth mode. He probably won't be using it for long since M.J. says in the trailer that she knows he's Spider-Man. Word might've traveled pretty quickly through to his peers after he showed up fighting alongside the Avengers in Endgame.

However, while there might be no "official" reason for Peter to keep hiding his other identity, he still does. Probably because he's afraid to come out of the shadows. In, Infinity War and Endgame, Peter  introduced himself as Peter Parker to Doctor Strange and Captain Marvel instead of using his made-up name. Despite camouflaging himself into the night sky, Peter's starting to want to fill Tony's footsteps, saying "The world needs the next Iron Man", to which Nick Fury asks him if he's going to step up or not. We'll definitely see him become the first superhero to carry the torch Endgame passed on to the next generation. 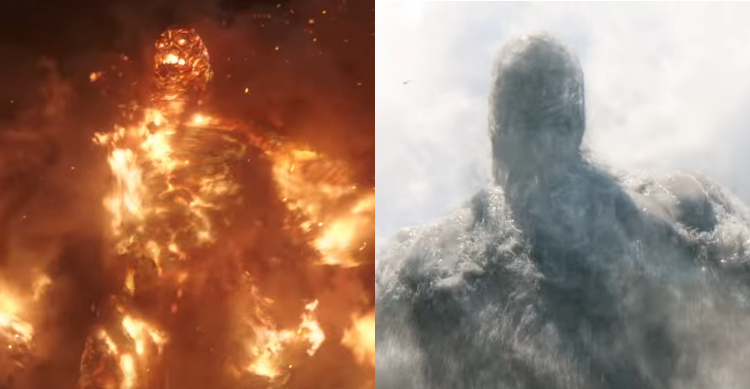 These guys could just be another way for Mysterio to up his fight against Peter, but some signs are pointing that they are the Elementals - extradimensional humanoids with powers over natural forces. Try not to get them confused with The Eternals - another Marvel spin-off possibly starring Angelina Jolie and Richard Madden.

Peter is truly graduating high school this year if he isn't being held back from The Snap. So it's cute that he's drinking an orange juice while Mysterio has a beer.

After sacrificing himself in Endgame to bring everyone back, Tony left Morgan and Pepper a hologram message to help them grieve. And it looks like he also reaches out to Peter, giving him or Pepper letting him have his glasses, which he wore in Infinity War and Endgame. We saw how they have heat signatures and x-ray vision as Tony used them to get a reading on the NYC street being attacked outside of Dr. Strange's apartment, and to see through one of S.H.I.E.L.D.'s headquarters in the 1970s. There's no telling what they might reveal to Peter on his trip.

The Accords, a legislation signed by 117 countries to regulate how the Avengers would defend Earth, was introduced in Captain America: Civil War. Society has had to rebuild since five years has passed after the initial Snap. This is the first major incident to happen after Endgame, but looking at a sight of destruction like this, one has to wonder if the Accords will once again have any power over Fury's next S.H.I.E.L.D.

His jet explodes out of nowhere, so we might able to assume all this awesome action is about to go down near the Tower of London and Tower Bridge. Also, the escalation of this line delivery is so freaking perfect.

New plan for the summer is to see Spider-Man: Far From Home as soon as possible. I will be seeing Hugh Jackman's one man show during the sequel's opening weekend, but YES. I'm excited for the Marvel's next saga to get underway and can't wait to see it. Are you guys read to stan Europe's friendly neighborhood Spider-Man?