David Tennant & John Barrowman Should Be On Your Convention Bucket List 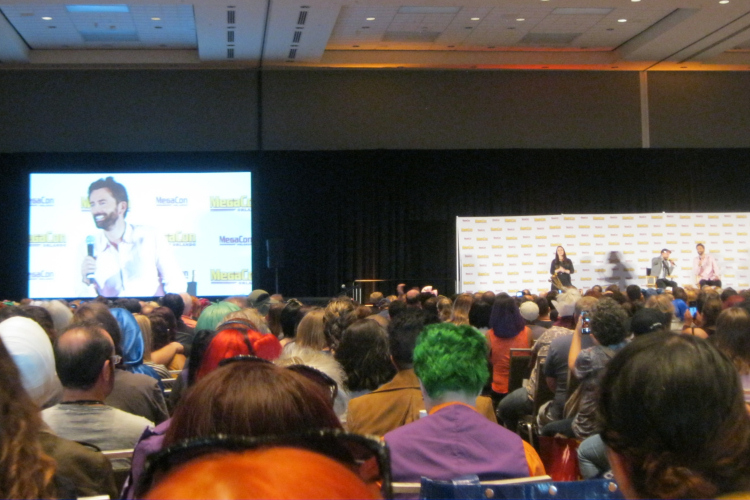 Every question and answer panel at a convention is different. Sometimes the atmosphere is intimate and feels like you're talking to someone you admire one-on-one, even if you're not the one leading the interview. Other times it can still be a regular question-and-answer panel, but the celebrity beams so much positive energy, it feels more like a party than anything else. Maybe you even feel like you're at a comedy club as the celeb takes centerstage to talk to the fans, tell adventurous stories, and even sings. Both of the latter is what you'll find with David Tennant and John Barrowman. So much so they should be must-attend events at your next convention. 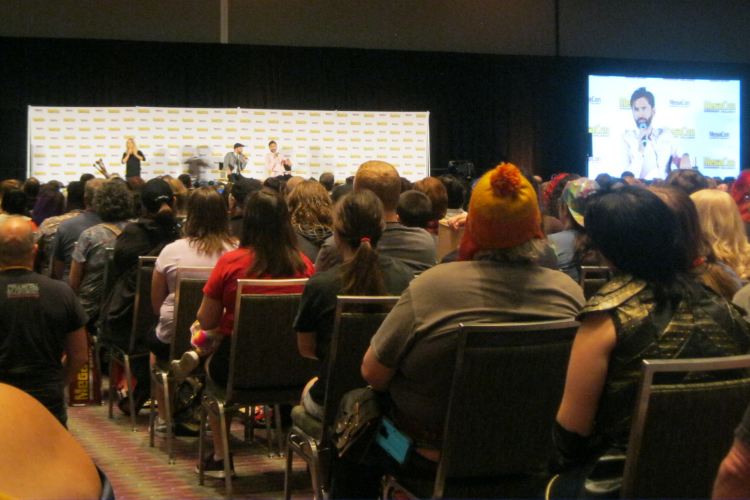 At MegaCon Orlando, David Tennant's panel was packed to say the least. How could it not be? He's starred on Doctor Who, Jessica Jones, Harry Potter and the Goblet of Fire, Broadchurch - to name a few. His credits in film, television, and stage run the gamut of characters and genres that it's hard to pin Tennant down as anything else as an amazing "multimedia actor" - a phrase that one fan described him as and he couldn't get enough of. He even felt like putting it on t-shirts and magnets.

When you see Tennant in person at a panel or a convention, he very much brings the positive energy with him wherever he goes. Delving back into his career, Tennant opened up about the joys and pressures of working in an industry that breeds creativity and imagination but also makes aspiring actors face a lot of rejection.

Having performed every kind of character imaginable, one fan asked Tennant about the differences of playing someone from Shakespeare versus The Doctor; he compared both the sizes of the roles in terms that thousands of actors have played Camelot while only a select few are able to portray the Doctor. Both roles invite more opinions, some more judgmental for Shakespeare than The Doctor while the latter might invited criticism online with the fandom, also has a tremendous generous spirit.

Since he's performed in so many mediums, Tennant said he never truly gets comfortable watching or listening to himself. In training at drama school, he attended a program where he could get comfortable in front of the camera and learn the mechanics of becoming a screen-actor, but he says that the experience of watching his work is usually agony the first time, but then he could judge what he liked or disliked about his performance on the second time. For aspiring actors, he encouraged them to try to get comfortable making themselves emotionally vulnerable for a character as well as building a thick skin because rejection is something is unfortunately something you have to get used to.

Throughout all of his time as an actor though, Tennant said he still finds surprises in his work. Becoming the Doctor was something he never imagined doing since the series was technically retired when Christopher Eccleston rebooted the series as the Ninth Doctor. Even though Tennant grew up watching the series, it was something that he never imagined being able to do. It was similar to him reading Marvel comic books growing up and never imagining the films they would be coming out with now. The experiences that came out of the series like his hilarious and longtime working relationship with Catherine Tate are things that make him so lucky to be able to be an actor.

And for fellow fans of The Office like I am, it was surprising to learn how much he is a fan of the show too. As the final question for the panel, he was asked what character he would like to play but couldn't pick one; he said he'd much love to watch the show because everyone on it was brilliant. That's the exact feeling I had walking out of his panel - it was brilliant.

Being in photos, with or without a celebrity, has never been my cup of tea. I much prefer to go for the autograph or stay out of the picture completely. However, the second David Tennant was announced as a guest for MegaCon Orlando and then photo-ops were made available, I didn't waste time buying one for myself. Which was quickly followed by anxiety of what did I get myself into, why am I doing this to myself, and would the photo-op be worth it. It wasn't until the day of that I learned all of the answers to my overworked fandom brain.

In comparison to photo-ops at other conventions I've heard about, the queue can be arduous and confusing. But MegaCon Orlando had a seamless queue. The photo-ops at MegaCon Orlando were held in their own space in the retail section section along with the autographs, merchandise, community zone, and artists ally. It's by far one of the most popular places at the convention, so it's not hard to miss and figure out where you need to go. That was one worry that was easy to let go of. Another was that every photo-op has a ten minute window for you to get in line. I think I got there about fifteen minutes early just as the line was opening and was able to chat with some folks around me until my group's session started.

All of the crew members were extremely nice, which lifted even more worry off of my shoulders. When the photo-op started, we were allowed to enter the room one by one. There was a separate area for you to put your backpack or cosplay props, basically anything you didn't want to inhibit you for the photo. Once I got into the room with David Tennant, I'm pretty sure I blacked out. I remember the crew members making sure everyone was close in line and ready to go. But as I moved closer to David, overwhelmed by his huge smile and general Scottishness, I said "It's nice to meet you", got my side hug, photo was taken, and then I left the room. I "came to" as I grabbed my backpack and waited for my photo to be printed out.

I will say, yes, photo-ops move faster than the Tardis spinning in space, but the atmosphere was friendly and I can finally say I got to meet David Tennant. I was literally on cloud nine and will be forever. One thing I'd like to learn how to do is actually ask for an "elaborate" pose. I don't know how fans manage to ask for one. I'm looking forward to trying again next time. 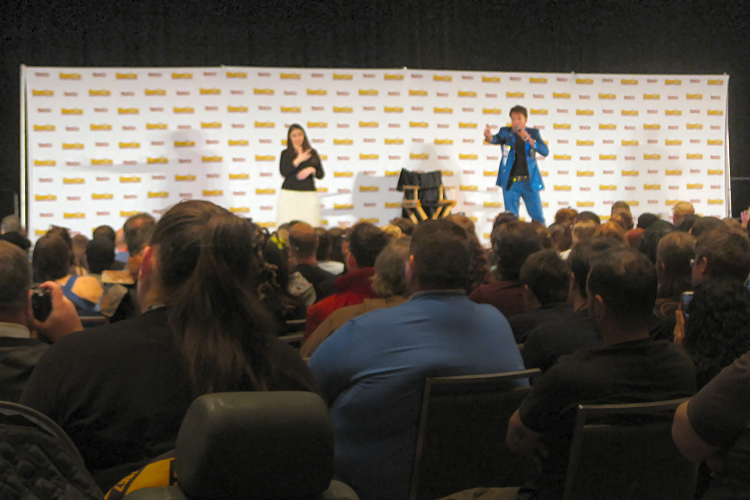 If you've never seen John Barrowman's panels, you're missing out. And if you've ever been to his panels before, you know you'd never miss out on seeing him in person.

The second he hits the stage, this time strutting his butt off in a sparkly Tardis designed suit and rhinestone heels, you know you're in for a real treat. The first kicks of laughter started as soon as Barrowman showed his suit and then proceeded to break down how the airline lost his luggage before the convention started.  Before you know it, the first story relayed into a retelling of being on an airline where the engines blew out and they had to make an emergency landing. And then launching into an entirely different tale of getting food poisoning and the unexpected photo his husband took of him on the side of the road. After delving into his adventures on the road and as a celebrity, he answers fans questions - ones that are just as boisterous and passionate as his storytelling.

Among his answers about Captain Jack Harness and learning how to sign language diarrhea, Barrowman might've also let the cat out of the bag just a tad as a fan asked him if his panels were ever going to be streamed on a service like Netflix - he couldn't say too much but suggesting everyone to start subscribing to Netflix was enough to get the hint.

As much fun and action-packed as conventions can be from attending panels to exploring the community zone, and searching for cosplayer, sometimes what you need is a panel that completely flips the typical question and answer session upside down. And that's exactly what John does.

I got clips of his panel above revealing which Golden Girl he thinks he is, the unforgettable food poisoning disaster, and singing A Thousand Years by Christina Perri. 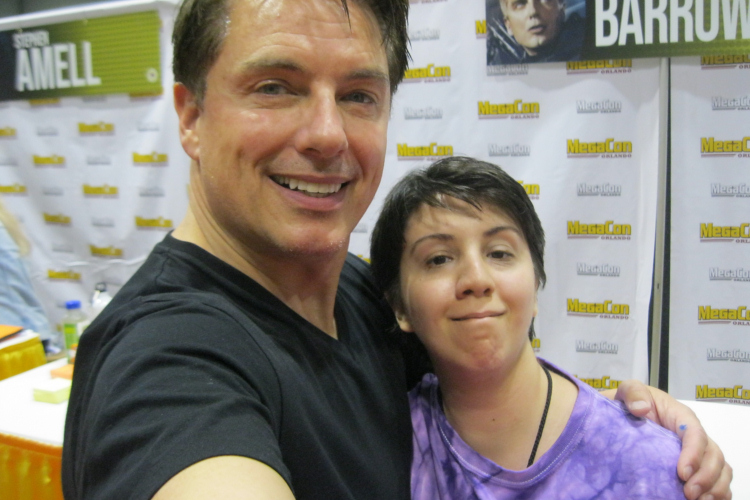 After John's panel, he went to photo-ops and then back to his autograph table. Even though the convention was nearing closing time, I couldn't miss the opportunity to say hi to Captain Jack Harness at his autograph table. Just like his panel John is spectacularly upbeat and personable getting into playful lightsaber feuds with younger fans and talking about Doctor Who. This time, I went for the autograph and a selfie. I think I'm getting the hang of this thing called "extroverted". Any time Barrowman and Tennant is at a convention like MegaCon Orlando, they should be on your bucket list and never taken off.
at May 31, 2019