Meeting Brown (2019) Personalizes the Divide between Love, Race and Racism 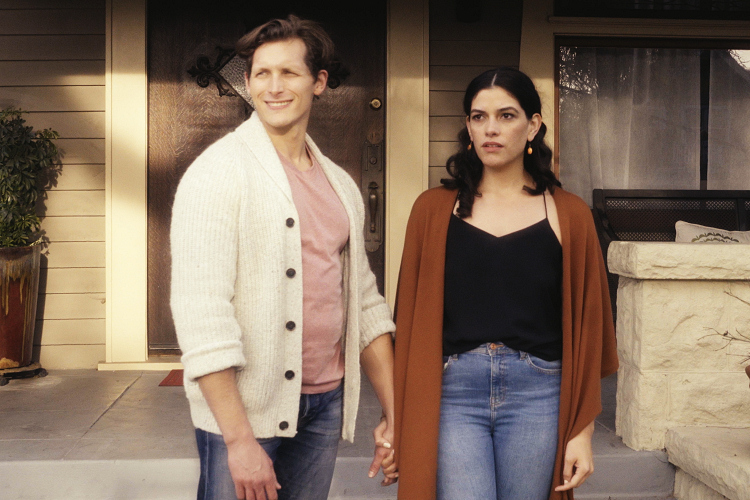 What do you do when the one you love turns out to be the opposite of what you thought? Great relationships can feel like they’re built on honesty and trust, but one brief meeting with her fiance’s best man Richard (Andrew J. Cornelius) changes everything for Alex (Diana Gonzalez-Morett) – a hopeful Latinx bride who sees her white partner’s true colors about their cultural differences.

Meeting Brown draws attention to the complex lines drawn between love, race, and racism. Director and writer Ana Lydia Monaco, a rising Latina filmmaker, tackles diversity by bringing representation to women of color to the screen with experiences from her own community. Realizing how often she didn’t see herself and fellow people of color onscreen, Monaco’s transformed her observations with bicultural couples to create a distinct narrative about life as a woman of color.

Nervous yet excited for her doubtful maid-of-honor to meet her fiancé John (Sean Dube) and his best man, Alex believes John is exactly the man she wakes up to every morning. Life is seemingly smooth between the two of them until that fateful evening when the four of them spend time together – or rather, Alex and Rocio (Sonia Diaz) try to navigate Richard’s ignorant remarks about their heritage and identity while John goes along with the "jokes". His continual dismissal of his future wife's feelings and invites an alarming realization to Alex about his own excuses about Richard’s behavior. Monaco’s script paces well between the dreamy state of bliss Alex thought her life was and the slow realization of John's beliefs aren't what she ever imagined.

Even though the film’s primary focus of the cracks deepening in a romantic relationship, there’s a genuine relevance, especially in our current political climate, of how much we might be expected to accept other people’s behaviors as they are. It might be out of fear of losing or creating a rift between a family member, friend, or acquaintance, there's a personal responsibility of recognize what individuals of other communities withstand and persevere. How we treat someone’s culture in our own lives speaks to how society treats minorities on a whole – women, people of color, LGBTQ, people with disabilities. Meeting Brown is succinct and to the point of how what most consider microaggressions, small acts of ignorance, start to add up whether we are bystanders or in the direct line of dangerous judgement and attacks.

As a ten minute short film, Meeting Brown presents a thorough examination of what Latina women encounter. Her cast carries the story well with performances by Gonzalez-Morett, Sean Dube, Sonia Diaz, and Andrew J. Cornelius. Even though there is an increasing divide between the film's leads, the actors share a palpable chemistry together as their idyllic relationship starts to present true issues. Monaco’s attention to detail and the experiences she has witnessed in her own life creates a refreshing defiance of the typical roles women of color are presented with on-screen and shines a light on the daily conflicts they encounter in real life.

Please Note: I was provided with a screener of this movie in exchange for an honest review. Meeting Brown is currently making the rounds at film festivals this year. Check out more of Ana Lydia Monaco past and current work at her official website.