Dell on Movies Against The Crowd Blogathon 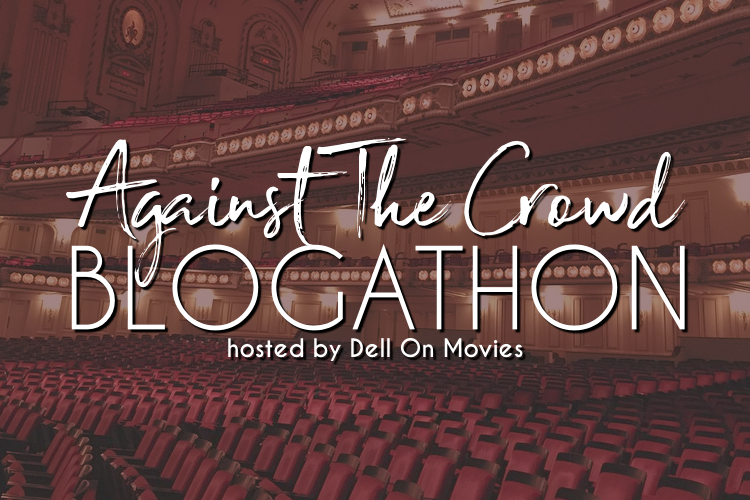 Dell on Movies is hosting the fifth year of his blogathon Against the Crowd, where bloggers share their unpopular opinions about movies "everyone" seems to love or hate. The blogathon sounded like a lot of fun, and not something I've participated in before. It was interesting to rummage through different genres, trying to find movies I thought were universally loved or hated and then find out my assumptions were completely wrong. I'm pretty surprised I actually found a pairing that fit a genre. If you want to see the full blogathon and the rest of the entries, check out Dell on Movie's blog here!

The blogathon guidelines:
1. Pick one movie that "everyone" loves (the more iconic, the better). That movie must have a score of 75% or more on rottentomatoes.com. Tell us why you hate it.

2. Pick one movie that "everyone" hates (the more notorious, the better). That movie must have a score of 35% or less on rottentomatoes.com. Tell us why you love it.

3. Include the tomato meter scores of both movies.

Here are my two picks. What do you think - agree or disagree? Feel free to let me in the comments! 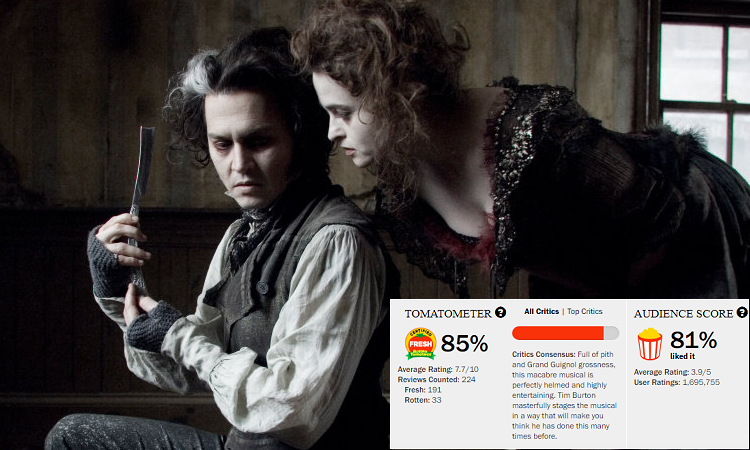 The Movie I Hate But Everyone Else Loves: Sweeney Todd: the Demon Barber of Fleet Street (2007)

This is one of the grimmest, darkest musicals ever created, so it should be right up director Tim Burton's notoriously gothic alley...yet he managed to make the adaptation completely lifeless for me. Similar to director Tom Hopper ignoring the absurd humor in "Master of the House" for Les Miserables (where he just sucked the life out of it), Burton made everything in the production from the lighting to the musical scenes too lackluster. Even though the musical is dark-as-****, there's levity in numbers like "The Worst Pies in London", "Pirelli's Miracle Elixir", and "A Little Priest" that should contrast the story, but everything here comes across as hollow. It doesn't help matters much that Johnny Depp and Helena Bonham Carter as Sweeney Todd and Mrs Lovett, respectively, are so boring. While their singing isn't as strong as it could be, their acting lacks any kind of lively energy and just seem to be going through the motions. They look indifferent in almost every single scene, and it's truly a disservice for two amazingly creepy, manipulative, repressed characters. There are a few saving graces like the legendary score, and the supporting cast with Jayne Wisener, Jamie Campbell Bower, Alan Rickman and Ed Sanders. Otherwise, this version is not as great as it could be, and I much prefer the stage performances by  George Hearn and Angela Lansbury. 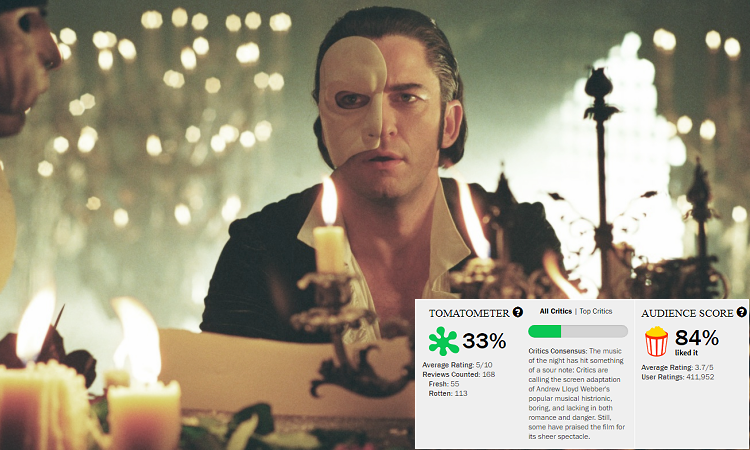 The Movie I Love but Everyone Else Hates: Phantom of the Opera (2005)

Andrew Lloyd Webber's Phantom of the Opera is one of the most popular musicals of all-time, and with that comes a lot of scrutiny and criticism for the adaptation. But it's always surprising to me how much this movie actually seems to be universally loathed. In fact, one of the most common reasons I read of why people despise the movie is because Hollywood even attempted to adapt the renown classic. Similar to transforming books into movies, expectations are set so high, there doesn't seem to be any room for forgiveness when scenes are excluded or changed. It's almost impossible for a different version to have a fair chance.

On the other hand, my sister is a huge fan of the Phantom of the Opera novel and theatre versions, and she absolutely loved this adaptation. As someone who's not familiar with the original sources, I love this one too and often try to figure out why it's so hated. The only things that come to mind is Joel Schumacher's direction isn't the fanciest, but it's not absolutely abhorrent as haters make it out to be. Emmy Rossum, Patrick Wilson, Minnie Driver, etc. make up a wonderful cast, and this might be the performance Gerard Butler has ever delivered (Has anything he's done compared to this?). Plus the production design is truly gorgeous and always makes me want to see the stage version. Like any musical, whether I'm listening solely to the soundtrack or watching the movie, I often rewind parts so I can hear/see moments over and over because they bring me so much joy. I definitely feel like this gets an unfair amount of hatred, and maybe in time, it'll be more appreciated than it has been for the past thirteen years.
at August 25, 2018