Ya'll know how much I love Harry Potter, but if you dived into the penseive with me for a second...you might be surprised to know my initial reaction to Fantastic Beasts and Where To Find Them wasn't the rapturous adoration one might expect. Fast forward two years to today, and the first film has increasingly become one of my favorites of the series. I've watched it countless times to the point that I have it memorized, not to mention that I just want to hold Newt, Tina, Jacob, Queenie, and all of his magical creatures and never let them go.

So it's pretty exciting that after a long, controversial wait for more news about the sequel, the official teaser has finally been released! #WandsReady? Let's go!

After escaping custody from MACUSA, dangerous Dark wizard Gellert Grindelwald (Johnny Depp) begins gaining followers of pure-blood wizards with the intent of overthrowing all non-magical beings. Former Hogwarts student Newt Scamander (Eddie Redmayne) is enlisted by Professor Albus Dumbledore (Jude Law) to thwart Grindelwald's plans, unaware of the dangers that lie ahead. As the wizarding world continues to divide, loyalty and love will be put to the test.

Now, I'm not a stranger to controversial fandoms, but it's difficult for me to conjure what my feelings towards the sequel is or will be. The road to Fantastic Beasts: The Crimes of Grindelwald has been less than what anyone might've anticipated. The fandom has been divided over Johnny Depp's casting as Gellert Grindelwald and the possibility erasing Dumbledore's sexuality, leaving many to ask ourselves whether or not to boycott or support the film. As much as a dark shadow has been cast on the sequel, there's also a mix of excitement and anticipation. It's definitely the bigger, grander adventure I've been waiting for...

Here are my thoughts on the Fantastic Beasts: The Crimes of Grindelwald teaser

0:03 to 0:08 - OMG, HOWARTS LOOKS SO FREAKING BEAUTIFUL
0:16 - WAIT HOW ARE THEY APPARATING TO HOGWARTS. I thought you couldn't do it. Is that because it's right outside of school grounds and not actually on the school? Okay, there goes the canon again.
0: 18 - "I have some question for you, Professor." Yes, we have a lot of questions too. #Number One, how dare you look so good.
0: 24 - "There's a rumor Newt Scamander is heading to Paris." YEAH BOI!
0: 24 - OMG, NEWT IS SO CUTE MY LOVE
0: 26 - Dumbledore using the deluminator on an open Muggle street....
0: 43 - "If you've ever had the pleasure to teach him, you'd know Newt is not a great follower of orders." That little smirk.
0: 43  - Love the line but is Jude Law trying to make his voice sound like Michael Gambon? Or is he sick? #awkward
0: 45 - Nice squeeze in of the new Wizarding World logo (which wasn't a known thing before but now it is) 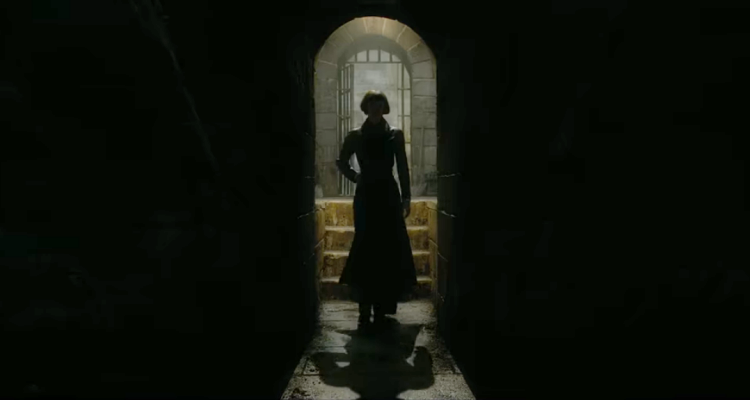 1: 16 - my favorite shot of the teaser
1: 17 - we're going to the circus! Look at that beautiful easter egg I found!
1: 20 - PICKETTT is going to unlock someone out of their cage
1: 21 - Credence is still a little bitter about what happened in NYC
1: 26 - Threstals? Being used in a chase scene? off of a building? SURE.
1: 33 - Is this what He Who Shall Not Be Named looks like in-between shooting Pirates movies?
1: 33 - "I can't move against Grindelwald. It has to be you." - Is this the scene Dumbledore admits he had feelings for Grindelwald? *crosses my fingers*
1: 36 - Newt's separation from his brother doesn't last very long.
1: 49 - I WANT TO KNOW MORE ABOUT THE HALLOWS. I'm thinking the second movie is Dumbledore with Newt's help racing to getting to the Hallows before Grindelwald can.

Newt's next adventure is extraordinarily bigger than the first movie. The story and production is on an epic scale. For a teaser, there's a lot of details to unpack and I'll probably re-watch it over and over again and see what I missed. Fantastic Beasts: The Crimes of Grindelwald will be released in theaters November 16th, 2018. Are you ready to go back to Hogwarts?
at March 13, 2018