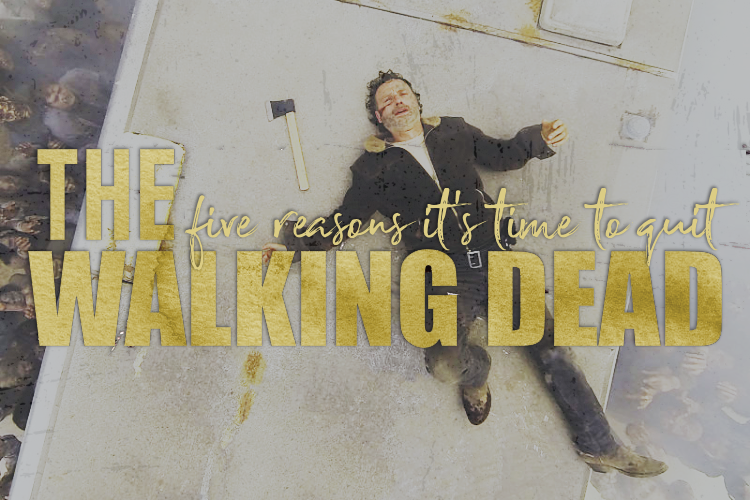 It's easy to write that I love The Walking Dead, but there might not be enough words for me to adequately show how much. For the past eight years, a part of my fangirl heart and brain has lived and breathed this show - its songs, its special moments, its amazing female characters, the recaps and anticipation of a new season on the horizon. But there comes a time where it's too painful or disappointing to watch the show decline beyond repair and the idolization chips away.

While The Walking Dead is still one of the most popular shows, fans have been dropping in droves for quite sometime. Lately, I've become a fan who's made justifications for why I still watch it: The worldbuilding isn't too bad. The earlier seasons are still great. There's still hope for something to change. But as season eight hits the half-way mark, and there's no going back after its unpredictable turn-of-events with major characters, I finally have enough gripes towards one of my all-time faves that I have to acknowledge them.

As a show I've been a hardcore fan of since the beginning, it's gut-wrenching to ponder saying good-bye out of my own free-will rather than the show officially ending in a blaze of glory. But the show has struggled to be consistent or return to the elements that used to make it so great for far too long. I don't want to quit something I love so much, but here are five reasons it's finally time. Are you sticking around for season nine? Let me know in the comments below! 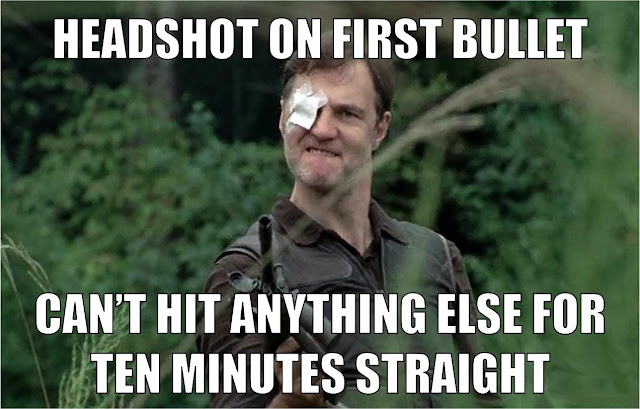 The Walking Dead isn't perfect, nor was it supposed to be realistic for a show about an incurable zombie apocalypse. Like the meme above, mistakes or incidental goofs early on in the series just became running jokes. But as time has gone on, the show's lost its focus from world-building. Characters run out of bullets only to show up in the next episode guns blazing. Or they take emotional detours from the plot that ultimately go nowhere. Cars have enough gas to take a million trips between Community A to B, but not out to scavenge or escape their enemies once and for all. Walkers or getting bit aren't a threat anymore, they're a tool for the director-of-an-episode to plug in homages to their favorite horror movies. Sure, it takes three days for the groups to go to war after talking about it for eternity, but nothing pales in comparison to the plot actually backing itself into a corner of inconsistencies one season after another.

4. The Villains Run The Apocalypse

Villains come in three forms: A) plugged into the background for several episodes before unceremoniously killed in one foul swoop aka Wolves and Termites, B) they're just a little bad to make you hate them but a little good to make you think they'll have some worthy redemption arc (Spencer, Nicholas, Eugene, Dwight), C) they're overrated like Negan.

Until season seven, where Negan's tilting and repetitive monologues were unleashed upon us all, The Governor held the record as the worst villain and ratings. Miraculously, the latter has become more interesting than the former because Jeffrey Dean Morgan was the wrong actor to cast, the show has lost its ability to write villains. The less time Morgan had talking about the same things over and over, the more menacing he became. If the villains are supposed to be any sort of threat against the protagonists, maybe they shouldn't be mere mouthpieces or set decoration.

3. Things Have Stayed The Same

When did the producers get their hands on a Time-Turner? Since season four the story structure has been the same, and it hasn't worked. In multiple locations and focused on different characters, episodes skip time to overlook essential relationships or prolong cliffhangers for shock value. Small but painfully obvious details become vacant easter eggs that are rarely solved. Meanwhile, staple characters like Carol have been reduced to the few things she's suffered before. If there's a kid, you know they're going throw them at her so she can relive losing Sophia again and again and again. After season six and seven failed to impress, and ratings slipped crazy, Gimple doubled-down that the formula would change. It hasn't. **** Happens.

Since AMC wants to keep the show churning forever, it has no end game in mind. So that means everything is disposable. When the writing was good, we didn't shut up about it. But because The Walking Dead has become obsessed with being a trend, it doesn't understand that when the writing is consistent there shouldn't be any tricks to keep us talking about it - we'll do it of of our own accord.

Andrea. Herschel. Beth. Dumpster Gate wasn't the first time characters were used as misdirection and bait, but it became the norm for the fans' hearts to be ripped out just to create temporary hype. (This is coming from someone who spent 2000 words trying to defend Dumpster Gate). Again and again, character deaths are filled with symbolism and homages of how far they've come in their journey just so we know THEY ARE GOING TO DIE. It's carved into our brains like Wolves marking us with a W. Only, most characters don't come back. They're just dead for no reason other than to send us closure rush-delivery. If it's a full circle death, at least, it must mean something right?

Family has always been a driving force behind The Walking Dead, not only for fans but the characters. At the forefront as a leader, Rick has cultivated a bond with other survivors to create a sense of unity between strangers just trying to make it day-to-day. They wanted to follow someone who inspired them to live as long as possible, while his son Carl was destined to be his successor.

However, a weird shift has happened over the past three seasons where the characters don't interact like they used to. Instead of keeping us on our toes about who had the gumption to survive, relationships have become disposable. When they interact with each other, it's almost like nobody knows each other or their history. Major characters are left to meander with the inner demons that never let them evolve while supporting players are a revolving door of last-minute beacon of hopes who are forced to die.

Ultimately, the lack of real humanity has robbed fans of the reason we claimed was so great about the show: it wasn't about the blood, guts, and gore, even though they were epic and entertaining, but the people in this world, their dynamics, how they grieved or fell in love or motivated each other to keep going despite the odds stacked against them. The doormat hasn't said 'Welcome' for its fans, characters, or cast for a while, so maybe it's time to finally take the hint and ride off into the sunset.
at February 21, 2018