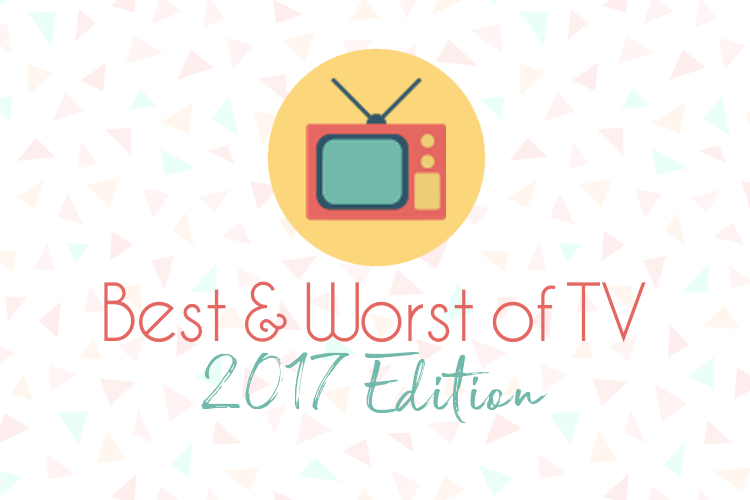 Another year has come and gone, and so has plenty of great tv shows. While I plan on catching up on so many that debuted this year in 2018, this is a Best and Worst List of TV in 2017. Some of my picks were newly released this year, and some are just new-to-me. From celebrating a fictional character's death to favorite ships, you'll find a lot of different categories below that I hope you enjoy.

I don't believe this post is particularly spoilerish, but I'll give a warning for the following shows just in case: The X-Files, Once Upon A Time, Big Little Lies, The Walking Dead, Bates Motel, Daredevil, This Is Us, Luke Cage, Feud, The Punisher. Thanks for tuning in! Here's to another round of fangirling next year!

Outside of Joel McHale's Glenn-Back-inspired tv anchor delivering one spectacular monologue delivered about war and population control, The X-Files came back for what reason again? It didn't touch on anything new and the writing was poor. No matter how amazing it was to see Scully and Mulder again, it was basically a rehash of the old plots. :/

What the hell did I just watch: Fargo

This show has never focused on one central case. It strings several, wild seemingly unconnected themes together, so a bit of randomness is expected. However, season three was just a bizarre mix of nothingness about two brothers fighting over a priceless stamp. I was super lost except for the bad-ass saving grace Mary Elizabeth Winstead.

Why Am I Still Watching This?! Show: Once Upon A Time

From letting SwanQueen slip through its fingers to normalizing abuse in relationships, the first iteration of this show had a lot of issues. There were plotholes and dead-ends I continually forgave because I thought the writing would get better (sound familiar?). It never did, and with its seventh season basically repeating the first six seasons, I actually gave up.

The cinematography is gorgeous, but the show is basically Tom Hardy grunting, and brooding naked. The story got better over the episodes, but I'm pretty sure my soul would've fallen asleep if it wasn't for him.

Tying with Taboo is Daredevil's second season. Jon Bernthal getting his own spin-off for The Punisher is the only incentive that made me want to watch Daredevil in the first place. Season one was a pain to muddle through, but everything got better in season two. Bernthal steals every scene and practically the entire season, it's a mistake he hasn't been nominated yet.

After a lot of hype, Stranger Things returned for it second season, and it was just okay. The story expands more on the Upside Down, and Will as a victim for the demagorgon, which is a lot of fun. While critics loathed the seventh episode covering a roadtrip with Eleven, Bill and Max were just pointless. Max seems thrown into a loop of boys who treat her like crap or go gaga over her 'cause Puberty Is On The Way, while her asshole brother Bill isn't nearly as compelling as the Duffer Brothers thought he could be. NEXT.

I Thought I'd Miss This Show but Didn't: This Is Us

I loved season one, and thought it had some beautiful messages about family and race. But, when the second season arrived after a pivotal character passed away, the show has gradually revealed just how uniquely unoriginal it is. The Pearson children are all selfish, rarely taking into consideration other people's feelings and are constantly coddling each other. The dynamics between the parents Jack and Rebecca as The Good Cop / Bad Cop, respectively, is repetitive. The series might be about a family, but they're all so alienating, the sentimentality wore out its welcome.

The Michael 'Well This Is Gonna Hurt Like A MotherF*****' Scott: RIP SwanQueen, Once Upon a Time
Runner Up: Sasha and Carl's Death, The Walking Dead

Six years ago the potential relationship between Emma Swan and Regina Mills was palpable. It became one of the most important ships for me, but season after season, as the too-often-brutal and scrutinizing community of Once Upon A Time escalated, this ship slowly grew apart into a prim-and-proper heteronormative crap. When season six rolled around, and most of the principal cast were fired before season seven, I actually couldn't believe the show concluded with Emma getting married to Captain Hook. Somewhere, it still doesn't register that the Savior and the Queen didn't up together as mothers raising Henry and making gay magic together. #SwanQueenForever

Except for a few hiccups, Bates Motel is almost a perfect show. As the the series reached its final episodes, one of those hiccups Chick became increasingly annoying. Using Alfred Hitchcock's inspiration for Psycho, I honestly thought the last season would cash in with Chick publishing a novel about the actual motel and Norma/Normans' crimes. Problem was, Chick was an unnecessary character who proved very little value. I was so, SO, SO happy when he got killed off.

I Didn't Know I Needed This In My Life: Luke Cage

Netflix and Disney are churning out Marvel shows and movies like tomorrow. While they all kind of run the same gambit, Luke Cage is by and far one of my favorites. The characters, the villains, and the music all meshed well together. I couldn't wait to get to watch the next episode every night.

Ryan Murphy managed to create a well-crafted show around one of the biggest cult movies Whatever Happened to Baby Jane, and not make its iconic stars fall into the Mommie Dearest territory. It took a good look at working women in relationships and as single mothers, ageism, and sexism. That truly surprised me because the trailers convinced me the show was going to be cringe-worthy hokey.

I don't know how the media or fans convinced themselves Big Littles Lies doesn't revolve around men more than the female friendships (and truly scares me that people romanticize Alexander Skarrsgard's character), but I still loved the cast, writing, and its depiction of abuse was absolutely disturbing. I was addicted to every episode and couldn't wait to see the next one.

If it weren't for a few saving graces with The Walking Dead, mainly the cast, I regret saying that I probably would given up on this series two seasons ago. One reason I stick arund is Richonne. I couldn't believe they finally had a honeymoon episode and are pretty much married at this point. Thank you writing gods for gracing us with scenes like this.

I Ship These Two, So Sue Me: Kastle, The Punisher
Runner Up: Claire Temple & Luke Cage, Luke Cage

The chemistry sets this show on fire. Frank wants to protect her as much as possible. Karen understands him more than anyone else. Apparently, a lot of fans of The Punisher don't ship Kastle. And, I have to ask myself: What are they smoking?!

Best Performance by Supporting Actor: Ron Cephas Jones This Is Us

This Is Us wouldn't be the show it is without Ron Cephas Jones. Let's be honest. He was the beating
heart for Randall finding his paternal father, who was less than the perfect image he had in his head.
Sterling K. Brown certainly gave a great performance as his son, but Jones was the backbone of his
arc. For a show that challenges how much sentimentality should be sprinkled onto its characters
before its too sanguine, Jones handled a lot of monologues and his character realizing the precious
meaning of life with charm, grace, and soul.

This is a truly difficult category, as I feel like a lot of the actresses from the summer's biggest hit could've been here. But I had to go with my gut. Woodley gives a wonderful performance as Jane, a young single mother trying to find her way as a mom dealing with PTSD from a previous rape and navigating the subsequent relationship she has with her son. It kind of upsets me how much love Laura Dern gets for BBL over Woodley. The former is not in the series as much as the others to be considered supporting, and the latter is the biggest catalyst to the story. Woodley deserves a lot more praise.

Bates Motel was not the easiest show to stomach, but the compelling performances were addictive. Highmore as Norman and Norma is probably his career-defining performance. Not only did we watch him grow up on-screen, but there's an astonishing maturity as he portrayed a young boy whose mind can't tell the difference between his twisted, loving, murderous mother in real life and or in his delusions. He often had to replicate different iterations of Vera Fermiga's performance as real-life Norma, the Norma in Norman's mind, and sometimes both at the same time. I can't wrap my mind around how he did it.

I'm pretty sure Deborah is the only thing keeping Daredevil alive. Matt's always off on his own struggling with his Daredevil persona, while Foggy is always telling Matt not to do anything and stomping away from the firm like a scorn child if he does. Which leaves us with Karen. She pretty much drives the plot, digging a little too deep into investigations and trying to make the boys come together for the good of Hell's Kitchen. Despite being attacked and probably should be experiencing a big case of PTSD right now, she still manages to see the good in others, especially Frank on The Punisher. She's bad-ass, determined, intelligent, and empathetic, probably one of the best  female characters around. They kept Daredevil's second season lit with their chemistry, and his own spin-off wouldn't be the same without her.

Sweet Christmas, I love Luke Cage so much. I'm sure anyone following my livetweet of The Punisher is surprised, but there's a big reason why Luke Cage won:  As much as I love Karen, if it wasn't for Jon Bernthal I'm pretty sure I wouldn't have watched The Punisher, which is a lot to put on the shoulders of one actor. Frank Castle treks an amazing arc, but truth be told, the storyline dealing with the CIA, Bill, and Agent Madani was incredibly boring. Luke Cage kept me engaged from beginning to end. I loved the power play between all of the villains, Pap's barbershop as Sweden, the music, its undertones of Luke Cage as unbreakable, the cast, humor, and action. Even more than Jessica Jones (which was my favorite Marvel series so far), I can't get enough of Luke Cage.
at December 31, 2017