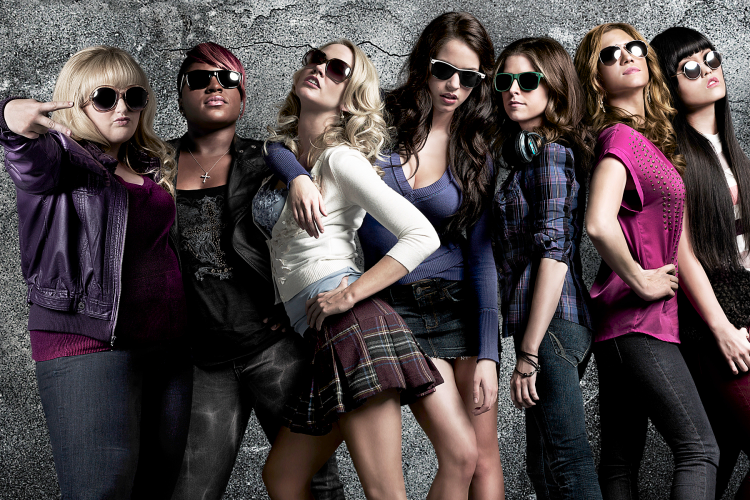 One of the things that excited me about Pitch Perfect was its reputation as a feminist movie. From the trailers and posters I had seen, I intuitively felt like I knew what the movie was going to be: singing and girl power told with a humor that left a lot to be desired. Finally jumping on the bandwagon, I honestly tried to keep an open mind. But nothing really prepared me for the onslaught of mixed messages.

Taking centerstage, rebel queen Becca (Anna Kendrick) wants to be a DJ more than anything. After she begrudgingly accepts her father to pay tuition for college as a backup plan, she joins an all-girls acapella group that's trying to recover from major embarrassment at a prestigious competition. With different ideas and musical styles, she knows she can lead them to victory. But in order to help them to success, she has to earn her spot alongside other newbies and learns that being by herself isn't as necessary as she thinks it is.

For its leading lady, the story sails along as she moves from a loner closing off everyone around her to finding her voice and place in the Barden Bellas. The group itself is filled with misfits just like her, reaching for success everyone hopes to achieve. But knocking down the movie's awesome music and hit-and-miss comedy is that the rest of the girls don't fare in originality or depth.

Everyone around Becca exists to reassure us what trope they represent. The girls might not need men to sustain them, and refreshingly, a majority of their musical prowess is about hitting those high notes and making their dreams come true. As much as that empowerment shimmers with inspiration, supporting characters weaken that united front because they're one-dimensional stereotypes: the ugly dorks, the tomboy, the slut, the fat one, the rebel, the control freak, the lesbian, the ice queen, the kooky foreigner. The movie is not as inclusive as it thinks it is. The proof is in the posters. 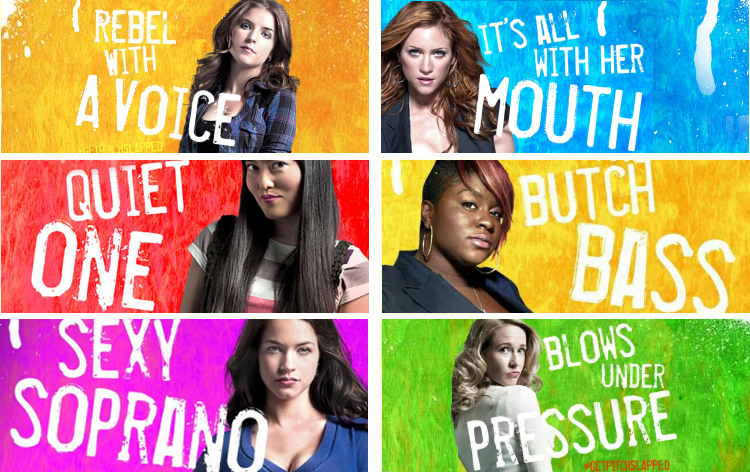 Pitch Perfect thinks it's a lot smarter than it is in showing how girls are treated differently in college and the arts than boys. Double standards run rampant with the club's rules to plant cringe-worthy innuendos. While Kendrick gets to play her role as deadpan as possible, her peers are exaggerated caricatures with glimmers of "normal" quirkiness. For instance, the girls aren't allowed to have sex, or even show interest in boys, or they'll be kicked out, except for one girl who sleeps around and everyone openly considers her as a slut. The beacon of eccentricity Rebel Wilson fabulously plays Fat Amy, but she really doesn't do anything besides point out her own weight so the controlling, perfectionist, skinny chicks don't. As the white female characters are backed into skinny, fat, or sexy corners, the minorities aren't treated better as ice queens, kooky foreigners, and the lesbian who comes onto everyone whether they want it or not.

Annoyingly, the movie doesn't know how to make the characters funny without making them gross, raising the question of why female-driven comedies try to be ten times raunchier than men. As the all-boys acapella groups naturally act dorky, selfish, shy, awkward, etc., the girls are forced to make uncomfortable puke and sex humor seem relatable. For every down-to-earth connection or moment between the girls, the writer employed word-vomit dialogue that felt random and induced second-hand embarrassment. Given that this is an all-female led movie in and about entertainment where boys run the show, it would've been nice to see more originality, smarter risks, and deeper sentiments.

In its better moments, humor and heart find their place. At its core, the women are sarcastic, determined, ambitious, loyal, and headstrong, and do their best with the roles they have. Their journey doesn't pit themselves against each other or use others as rungs on the ladder to a-ca-success. In Kendrick's favor, the adorable cups song put her on the map, and Becca is a great role model. Her story is packed with a lot of layers, but it would've been nice if the group had the same vulnerability and growth.

To be honest, Pitch Perfect is fun, if you can look pass a lot of problems, and I can see myself watching it if happens to be television. (But I'm hesitant to see the sequels since I've heard the characters don't get better). The sisterhood and camaraderie of the group give the cast some material to do the best they can, while the musical sequences are purely catchy. Ultimately, if Glee and Mean Girls didn't throw up all over the story, its potential might not have fallen so flat.