What Harry Potter Means to Me 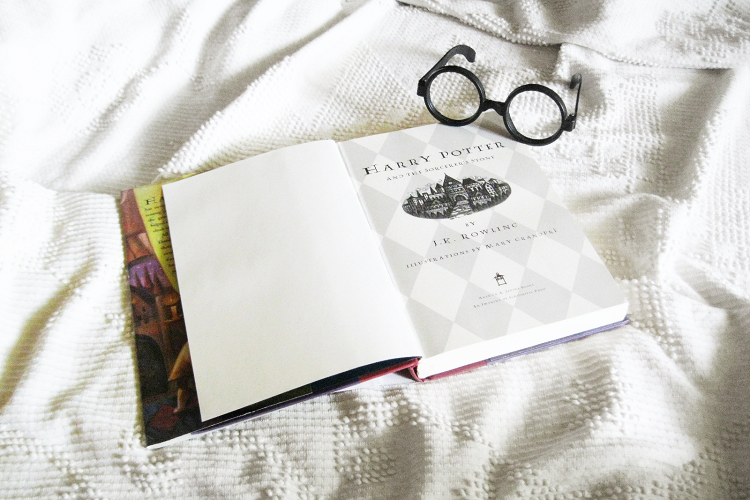 On June 26th, 2017, Harry Potter and the Philosopher's Stone turns officially turns twenty years old. As a devout Potterhead, I tried thinking back to the time when I was a kid during the very beginning of the series J.K. Rowling had created. I don't remember much about the nineties, and maybe that's a good thing, just by the lack of coherent trends that took place then. The memories that came to mind was just how much Harry Potter means to me, and the weird road it took from pre-fan to a hardcore one.

Unlike an almost entire generation, I didn't grow up with Harry Potter in a typical way - dressing up and queuing at bookstores, anxiously reading each new adventure, chatting and befriending other Hogwarts students on forums and websites until the new book was released. Ultimately, being apart of the fandom culture that is so much more well-known and celebrated today in the open.

As a pre-teen, my little town was very hush hush about the wizarding world. In classes, kids who were given permission by their parents to read the books were as odd as the ones who were forbidden. My classmates chatted about their favorite characters, but it all felt very off-limits; that even though it was allowed, it was still wrong. It didn't help matters much that the quiet protest at school was only amplified on the news with groups hailing the Rowling's fantasy saga as 'evil' and 'satanic' burned copies, and the increasing controversy that the series was recruited impressionable children into worshipping the occult.

Either from the library or my mother, somehow I managed to finagle Sorcerer's Stone, Chamber of Secrets and Prisoner of Azkaban. I don't remember reading them in secret, one after another, but being shy, I hardly ever vocalized what or how much I loved the books. If my mom took me to the mall, of which Warner Bros. used to have stores filled with Loony Toons, Animaniacs, and Harry Potter merchandise, I'd usually oggle everything knowing it was too expensive to buy but secretly wanting it anyways. She knew I was interested, but we didn't really know how much by a long shot.

Then, the one time I really expressed my love of Harry, everything changed.


I was on an errand run with my devoutly religious grandmother and aunt from my father's side, and shared how much I loved the boy who lived, his strange new school and the adventures he was going on with Hermione and Ron. That wasn't such a good idea, as the monumental 'ethical' controversy towards the books was mirrored back at me by my own family. My grandma, not the soft and fuzzy kind you might be thinking of, but hardened and stubborn, made me me believe that by reading about wizardry I would end up going to hell. To even have a granddaughter associated with a source of sorcery seemed inconsequential and inexcusable, like something that had to be Avada Kedavraed immediately or risk spiritual contamination and damnation for herself too. 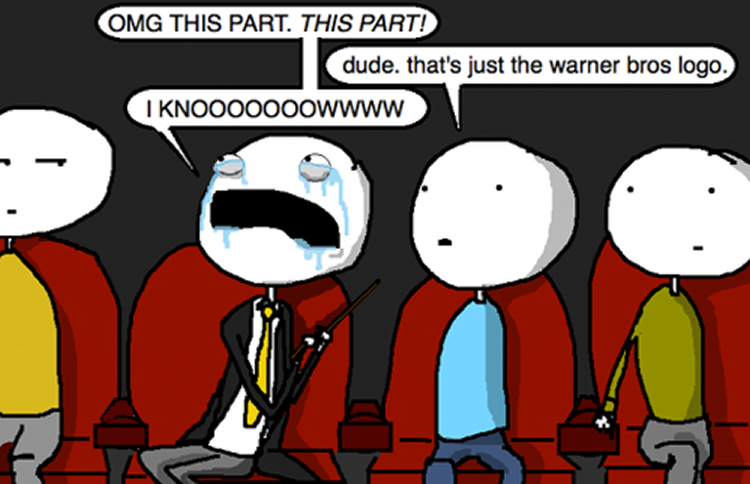 Growing up in my family, there wasn't a lot of talking, sharing, or me being a kid. I didn't know I could say anything to anyone about how my grandma made me feel. I was sheepish, my dad and his side of the family ruled all, and there was a lot of pressure to please. On my kindergarten report card, my teacher wrote 'people pleaser' and 'perfectionist'. So doing the one thing my relatives told me not to do seemed like the right thing - in response to them and their beliefs instead of my own.

As far as I could tell, there was certainly reason enough for kids question the so-called moral safety of fictional kids learning how to use magic and defeat evil - as evidenced by the protests on the news and classrooms divided between the freaks who read the books and those who didn't. When I told my mom years later the reason why I had grown distant from Harry, she was infuriated towards my now-distant relatives, to say the least. To give myself the benefit of the doubt, I was still a kid, but it's still something I wish I had spoken up about.

I watched the fandom grow from afar. Every time the next book was available at the library with a waiting list as long as a scroll, I wanted to put myself on it but didn't. Like clockwork, I even knew when to leave some of my friends alone because if they got a copy, especially one from a library, they only had a few days to read it all before returning it. As the movies came out, I usually stopped whatever I was going to watch trailers. Funnily enough, as much as my family went to theaters when I was a teenager, and it was a lot, previews of new releases were rarely played, maybe a continuing sign of the quiet ban my town held. Sneak peaks of Harry Potter and the Half-Blood Prince were the most significant cause an inevitability of knowing the series was one movie (then two movies) away from officially ending, and I had already lost out at being on the same page as everyone else when the books had finished two years earlier.

My acceptance letter to Hogwarts didn't officially arrive until a month before last movie was released.

ABC Family (now FreeForm) was holding one of their Harry Potter weekends, airing all of the movies from Friday to Sunday. Catching on through the wizarding wireless network that Harry Potter and the Deathly Hallows Part 2 was about to hit theaters was my be-all-end-all last attempt to be an unofficial part of history. My sister and I poured everything into the marathon, throwing caution and years of fear aside (my sister who never had any sort of attachment to the books but went along with the ride for or because of me - thanks sis). We squeezed in all of the movies before going to theaters that fateful weekend to see the final installment.

Its posters touted 'It All Ends' but the strange thing was, I never felt for a second like I had been away. All of the characters and story felt so organic to who I was as a person as if I had always been queuing for every book and seen every movie, had special Potter birthdays and years of fangirling behind me. I cried just as much as graduating Hogwarts students when beloved characters were killed, Hogwarts was decimated, and Harry used the Resurrection Stone to face off against Voldemort. Somewhere inside of me, I had always been wearing my Hogwarts robes, and now I could finally take off the invisibility cloak.

When everything was ending for fans, for me it was a beginning, which was a curse and a blessing. It was only the former because the excitement and anticipation with other fans had weaned. Gone were the years of talking about theories on forums the second a new book came out or fangirling over breaking news about cast announcements. It wasn't easy recognizing how much I missed out on when I was reading the books for the first time and didn't have many to anyone to turn to share the same epiphanies with. 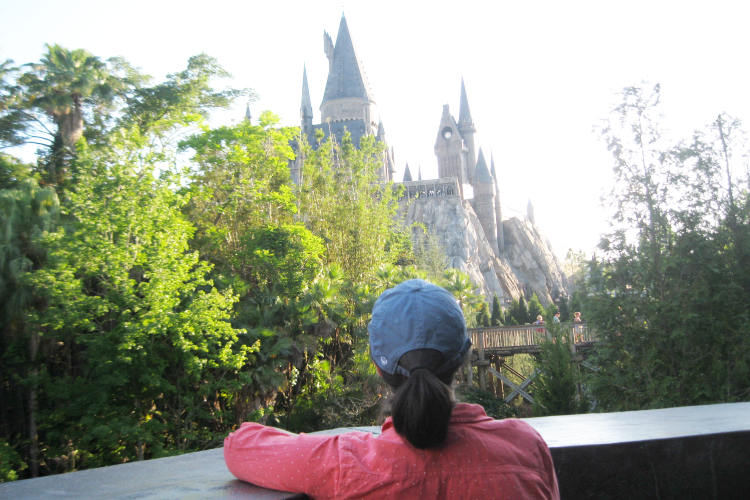 But then I got so much back. I had grown up without Harry Potter, or at least with it from afar, but my childhood was rebooted. My love is hardcore and remains the biggest fandom I'm a part of.

A whole new side of me has grown from the books, movies, theme parks, and the post-Potter universe like Fantastic Beasts and Cursed Child. The books helped me get through some of my toughest years of college, and gave me the courage to want to be a fictional writer. I've started blogs 'cause I wanted to share my thoughts about what I read and get the feels over news, and from that, I've made friends, reviewed products, had the courage to become a member of the press for conventions when the hermit in me probably yearned to stay at home. If my anxiety wants to take over and paralyze me into fear, I remember the magic and hope in the world and all is well.

Rowling created such a magical world of escape that, sadly my relatives never figured out, goes beyond witchcraft and sorcery, but has characters everyone can relate to and life lessons to learn, things that have helped me cope and given inspiration. It's cliche to say but I feel at home in Hogwarts no matter what form it is from re-watching old documentaries or looking at fanart, to going back to the books and movies or visiting the theme parks and never wanting to leave. Every time I search something new, even if it's crafts on Pinterest or theories that are still going on here and there, it doesn't seem so silly to be invested in something that's given the world so much, let alone little old me.

Thanks to JK Rowling and Bloomsbury for taking a chance on a book with a big idea that taught us all about friendship, bravery, politics, social justice, bullying, and good versus evil. It's taught me to speak up and not be afraid to be myself, or love what I love. The series helped me embrace what a nerd I am now, how comfortable I am in blogging, cosplaying (not even as Harry Potter characters but other people), and enjoying fandom from Star Wars to The Walking Dead. It's such a huge part of my life and I'm proud to call myself a Potterhead. Harry Potter means everything.
at June 26, 2017