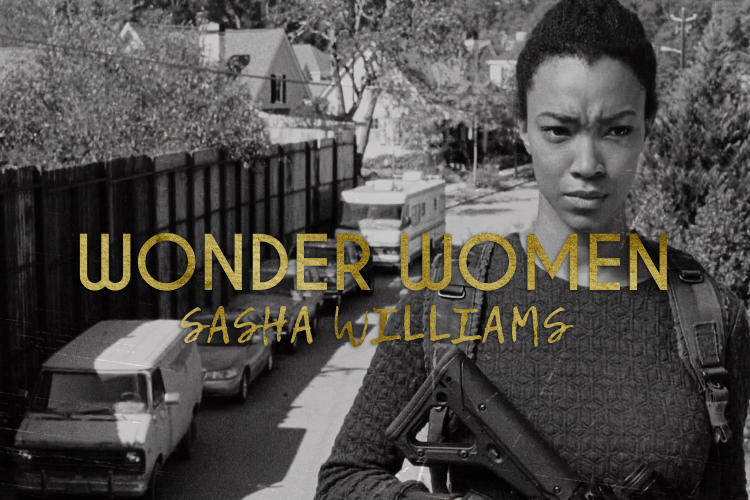 For a while now, we've been celebrating women of The Walking Dead like Lori Grimes and Andrea, and then Maggie and Beth. Lucky for us there are plenty of strong and complex survivors who are worthy of being under the spotlight.

For this edition, we're moving onto the calculating straight-shooter, Sasha Williams. From her skills as a warrior to her devastating losses and post-traumatic stress, she's been an invaluable and complex survivor.

We're going to take a look at how awesome this woman is, and how the flaws or achievements of the writing shape her. What do you love about Sasha? Feel free to share in the comments! Hope you enjoy! 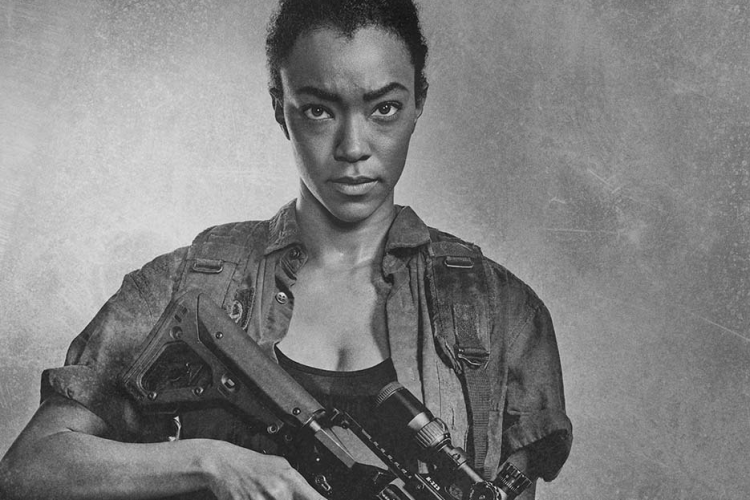 Sasha Williams, with her brother Tyrese, enters the series in season three. We don't know much about them in the beginning, except to discover that they survived the apocalypse up until then by moving into a survivalist neighbor’s basement. Eventually, they went off on their own once supplies ran dry and established a group who was slowly picked off.

What we see from their encounters with Carl and the rest of the group is that they're really quite naive about the state of the world so far. When they reach the prison and are held in a cell until Rick returns from Crazy Town, they’re willing to play the rules and respectful to making contact with others. As far as we knew they’d yet to come across enemies like Shane or The Governor. When two others in their group scheme to kill off Hershel, Beth, Carl, etc., Sasha and Tyrese downright refuse. Later, when they reach Woodbury, and the Governor insists on a war to take down the prison, they opt out by offering to take care of the innocent people left behind who can’t fight. Given how unforgiving the apocalypse can be to survivors, they’re still in a state of thinking everything is on an even keel; they don’t commit to harm to anyone else, so no foul.

The introduction to Sasha and her brother is quite trustworthy, given just how brutal the apocalypse can be even in the first two seasons. Gradually, she becomes a culpable woman within the group: a remarkable warrior with a practical, tough outer shell that masks a deep vulnerability.

By season four, Sasha is a formidable leader. She’s a member of the council as well as going on runs with Daryl.  Her background as a firefighter is only mentioned in the comic books, but her ability to strategize and be a team player is obvious. Those around her know what a good shot she is and counts on her to get the job done. In a group setting, she’s calling the shots of scavenging and getting out safely against walkers.

Out of most members of the group, Sasha is quite the realist and often battles against what she thinks and feels. As Abraham later says why he’s attracted to Sasha, it's her ability to call bullshit.

When Sasha is one of the flu victims in the prison, she doesn’t give up helping Hershel trying to save other patients. But the odds set against them getting viable treatment makes her question if she’ll live or die. Her belief system slowly grows into recognizing that it’s not just walkers who are threats but also people and the environment itself can be too.

This pragmatism carries throughout the series. She’s definitely not above helping Maggie find Glenn after the prison falls and everyone is separated into different directions. But her utmost concerns are locating food and shelter because she needs a mission, and they need the basics. Even later in season four, she's the first person of the group to recognize that Terminus could be a false hope, and in season five, on the threshold of becoming a Terminus dinner, she voices her disbelief in Eugene's plan to get to Washington D.C.

For a while, Sasha’s aim is to survive and do it by the bare minimum of food, shelter, and the community. She has long-standing friendships with other people, expressed here and there in the background of bigger conflicts like Daryl, Maggie, Michonne. But her ties to people excluding her brother aren’t distinctly deep until Bob wedges space into her fears.

Bob changes her belief system about what it means to survive. Despite going through a dark period of alcoholism, his optimism becomes contagious. He recognizes that she is the toughest person he ever met, and the sweetest too. After the prison falls, and her, Bob and Maggie are searching for Glenn, Bob’s ability to find the silver linings transforms Sasha’s instincts to see the threats and recognize the goodness in nightmares. When he is not only bit by a walker, but turned into a barbecue for the Termites, she’s unable to kill him so he doesn’t turn back into a walker - to do so would be extinguishing the hope and love he showed her.

Her relationships to Bob and Tyrese are imperative to her growth of the type of person she believes she needs to be in order to survive. Like other good-natured characters on the show like Hershel and Beth, positivity, wisdom, and even the inability to kill walkers and also people lessens their odds significantly. Her humanity doesn’t slip away from her often, but their deaths imprison her feelings.

I don't believe in magic or luck. I do the math and I don't gamble.


Like her friend Maggie Greene, Sasha is the last woman standing of her family and romantic relationships. Being one of the best fighters of the gang, that works to the best and 'worst' of her advantage.

Her emotions run full-throttle and deeply, and differently than the rest of the group and how they handle situations. Maggie turns her losses into an emotional resource to keep moving forward. Michonne, at first tried to hide behind the dead, and then became much more composed to communicate her thoughts and feelings, and not run. Carol adapts to people and situations to change herself to change the game. Sasha is strongly vulnerable underneath her bad-ass exterior. She's afraid to admit that she's afraid, only coming clean about it a few times to others. The losses of her brother, partners, and friends eat away at her, and she has no place to relieve her misery except to eventually take it out on the dead.

One of the best storylines for the women of the show is Sasha's post-traumatic stress in season five. It's absolutely beautiful and touching the different stages she goes through to deal with her trauma.

After losing her brother Tyrese, and her boyfriend Bob, and witnessing Beth's death, she becomes a quiet the raging storm. Ruthlessly on the road, she doesn't commiserate with the group, refuses to take Michonne's advice to keep her cool and unleashes her anger out on a hoard of walkers. Things grow even worse when they finally arrive at Alexandria, a utopia for suburban survivors, and the housewarming minutiae during a late-night Tupperware party provokes her to declare, "That's what you're worried about?!" It's something underneath everyone in our group is thinking and feeling and trying to swallow in one way or another. Sasha is the only one who feels so deeply about this radical adjustment from suffering so much brutality to the disconcerting luxury within the community, she has to call it out.

The outburst gives her an opportunity to become the watch-guard for Alexandria, working out her grief by killing walkers. But her intention as a guard isn't offing walkers before they reach the walls. She actively goes on the ground, shoots a round of bullets at framed pictures of smiling happy people, and says "Come and get me". When Rosita and Michonne later try to stop her, Williams' anger gets the better of her again, pointing out to Michonne that 'It worked for you! Don't you see that? You can't help me!'. Michonne hasn't realized it fully yet but she does have what she wants: a family with Rick and Carl. It's also one that Sasha kept opening herself up towards and lost. Her grief pushes her to even lay among a mound of dead walkers and rest peacefully, literally putting herself in the ground.

Self-awareness is a beautiful thing.


Out of the darkest moments of the apocalypse, Sasha managed to come out the other side to a deeper understanding of herself. By going through the motions of putting herself at risk against countless walkers and recognizing her pain in a face-off against Father Gabriel, she realizes the advantages of being alive: contributing to the group, having food, a roof, and the people around her. She also realizes just how accountable everyone is for how they act and what they decide to do to survive.

When her relationship to Abraham begins, it’s another start for her at being open to a future. As Abraham’s behavior slowly replicates her own in season six by taking risks and not thinking of the mortal consequences, she is actually the catalyst for him realizing what he really wants in life; of not being in love with Rosita. With their weaponry skills and straightforward personalities, Sasha and Abe had an opportunity to be an unstoppable couple, but unfortunately, she had to suffer another debilitating blow with his death by Negan.

Unlike her losses with Tyrese and Bob, she’s able to put her grief into words by sharing her mourning with Jesus and Enid. She finds comparable strength with and from Maggie to go on. Sasha is also in a position of not casting her revenge solely against walkers but to bring Negan down. She has the ability to take calculated risks, but that crumb trail of impetuous behavior to lash out can set the odds against her.

Thankfully, the writers haven’t wavered with Sasha too much. They’ve never deviated her behavior or choices to camouflage into every season. Even when Abraham leaves his longtime lover Rosita for Sasha, their friendship doesn’t’ resort to bitterness or a catty love triangle. There’s  mutual respect and understanding between them, and this can even be described as most of Sasha’s friendships to other members, though more development between all of the female characters lacks in the main storylines.

Sasha’s evolution is one of the best. In her most difficult moments, her emotions act like a volcano; so much bubbles underneath the surface until it explodes. But to counter-act defeat and soften the blow of the miseries she’s endured, her no-bullshit attitude makes her a fierce ally, formidable woman, and determined warrior. She's willing to do whatever it takes to complete a mission. She's moved through the stages of grief with grace and in complete opennessto regroup, fall in love, protect her family, persevere through PTSD, and come out the other side with the clarity and determination. She gets the job done.
at March 20, 2017