Bridget Jones is one of my all-time favorite film characters. The trilogy itself might exaggerate love as all romantic comedies do, but its heroine doesn't adhere to the improbable Hollywood standards. You know the kinds: the hot forbidden but normal-enough-looking girl next door who manages to be the cool girl most guys want in every situation. Or the Manic Pixie Dream Girl. ETC.

No, Bridget is something else. She's self-destructive but determined; idealistic; flighty and charming; pressured by society about dating, marriage, and body, but tries to be single-minded. And, it's been quite the treat and torment to watch her journey through Bridget Jones's Diary, Bridget Jones: The Edge of Reason, and Bridget Jones's Baby. 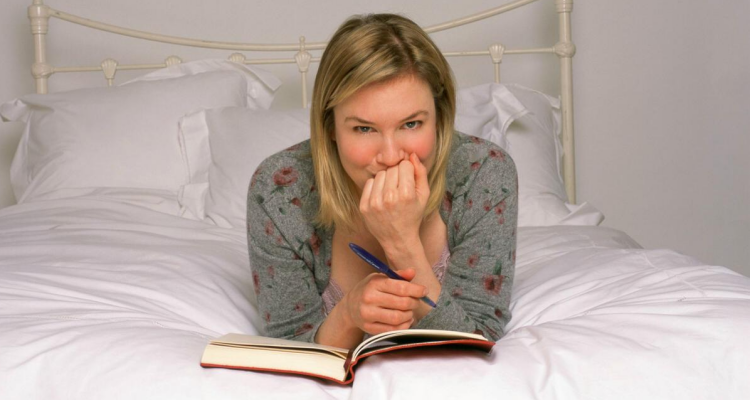 Directed by Sharon McGuire, and based on Helen Fielding (who was also the screenwriter), Bridget Jones's Diary is one of the best romantic comedies ever. Bridget (Renee Zellweger) journals a year of her life as she battles a list of resolutions: weight, cigarette and alcohol intake, professional hurdles, and torrid relationships with her boss Daniel Cleaver (Hugh Grant) and Mark Darcy (Colin Firth).

Headlining the low-key prequel is Renee Zellweger. When the film was made, Zellweger as an American playing a Brit caused great outrage. Despite the pressure of living up to a beloved bestseller, and critics who body shamed her, she delivers a hilarious performance. Bridget isn't necessarily representative of every Everywoman, but she's relatable by often not having her act together whether by making sheer mistakes or reacting to romantic/personal disappointments. She is flighty, a wee self-absorbed but loving, recovers from her embarrassments as best as possible with humor (and a bit of drinking). Jones could've been over-the-top, but the native Texan fleshes out the character very well. This might be one of her best roles yet or ever.

A great credit to this movie's lasting impression goes to the script. A thesis could be made of the numerous parallels of Jones evolving sense of self and relationships, but I won't go there....

While remaining funny and touching, the movie explores how much pressure Jones (and women in general) is under from family, friends, and society to get married and settle down. Every corner she turns to is a glaring reminder: Your eggs are expiring. You're getting older. Tick tock. Yearning for validation, she blindly falls for the creepy yet charismatic seemingly perfect man (Daniel Clever). He shows her attention, despite the fact that it's the cheap kind. She triumphs, fails and goes about her business with a great support system of friends and dysfunctional, loving parents. She learns not to equate being single to worthlessness, about the type of man who is wrong for her, and accept the one who could be right.

Jones's life reflects a modern day Pride and Prejudice. Similar to Elizabeth Bennett's arduous relationship to Wickam and Darcy, Jones tries not to settle for someone for the sake of it, but a person who offers her true love in return.

The whole cast is nearly darn perfect, especially with Firth. (And Hugh Grant as the sleazy wolf in Prince Charming's clothing). Like Jones, Darcy too is almost molded into a role: the distinguished lawyer with the distinguished lawyer wife and all of the prestigious titles. But with Jones, opposites attract. The only thing holding them back is making wrong assumptions. Darcy genuinely appreciates her, even it's from afar. His personality is a little bit dry, but he's a man of looks more than words. Anyone should really be admired the way Darcy enjoys and appreciates Jones' company. Firth gives a million subtle affectionate mannerisms, it's really what makes this modern-day Darcy resemble Austen's classic creation but also his own thing.

As the first movie of what would become three, it's unaffected by expectations or the typical style of rom-coms today, where apartments look like Ikea apartments and characters' jobs don't match their designer wardrobe and impromptu luxury vacations. Jones's entire savings probably goes into cigarettes and alcohol instead of Dolce and Gabanna and Milanos. Her struggles with self- image, vibrant friendships and boorish job, and her life like clothes and apartment reflect, which makes her relatively down-to-earth.

Bridget Jones's Diary explores her troubles with wit and sincerity. Dialogue and scenes land at the perfect times to be funny and touching. We can brush off her embarrassing and relatable moments with a laugh or cry, and also want to see her succeed. 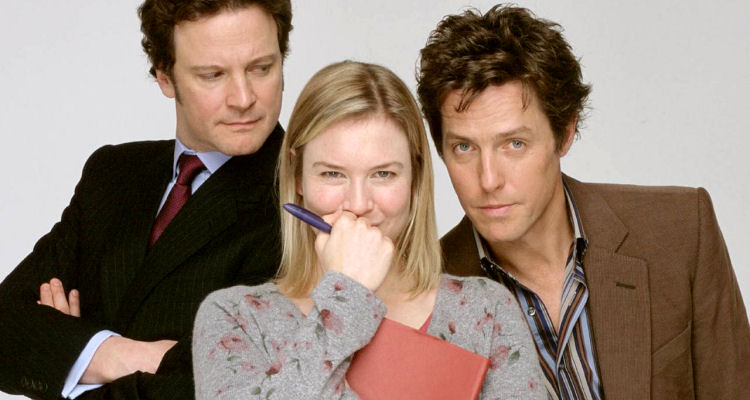 Unfortunately, that's not the case for its sequel. Similar to other genres like superhero or action, romantic comedies rarely require a follow-up, but heck if Hollywood doesn't dabble in the story after the more important story. Enter: Bridget Jones: The Edge of Reason.

Under the helm of a different director but returning screenwriter(s), the story tries to explore Jones and Darcy's relationship after the assumed "happily-ever-after". Their differences threaten to tear them apart, but instead of exploring Jones' spontaneity to Darcy's reservedness with a clearly constructed arc, the movie is more or less a circus.

Though Jones might've needed that extra boost of Darcy loving her just the way she is from Bridget Jones's Diary, her outlook of him and herself flips upside-down. Out of nowhere, she seems to morph into an overly-smitten overprotective obsessee who projects her jealousies onto Darcy. Unlike the first movie where she had rumors/prejudice to base Darcy on, here she feels like he wants to fix her without him ever giving that indication. And her flubs in public at work functions aren't established as if they're naturally different, but the movie is going out of its way to humiliate her.

The shared "I like you very much - just as you are" speeches in the first movie is vital to both Darcy and Jones. Yet the sequel seems to forget why it, we, and Darcy liked Jones just as she is. Though Zellweger is still funny, every time Jones exudes confidence, scenes go out of their way to remind us how out of place she "should feel" about her weight, outspokenness, and lack of formal education. Even though she previously achieved professional notoriety, she's reverted into sideshow tricks. Her humor transforms into repetitive silly gags. It's only more exasperating when Cleaver is back on the scene, and short term memory nearly blinds her to fall for him again. She's stuck between a loser or knight-in-shining-armor place which devalues her already complicated self-esteem.

Its respectable Edge of Reason was like "Hey, Bridget and Mark were barely friends who had a lot of misunderstandings. Let's see if they can make it work." But as flimsily as Jones dismisses Darcy's true acts of expressing his feelings for her and boldly leaves their relationship, she wants him back for nearly the same flimsy reasons. And what she's going back to is not the same Darcy. Before he merely concealed his feelings like the 'upper-class begrudging Brit' trope, but he's almost like a robot here. The script doesn't offer him, or her, the same emotional subtleties. They both read each other wrong in all of the wrong ways and the story doesn't balance their possible incompatibility naturally.

The second installment has some funny and genuinely dramatic moments, but most of it feels cringe-worthy. After the initial Cleaver fiasco, it's natural to explore Jones's trust issues. Instead, the movie evaporates her in exchange for Darcy's "approval". She ends up riding off into the sunset with Prince Charming, but I'm not sure she actually triumphs. 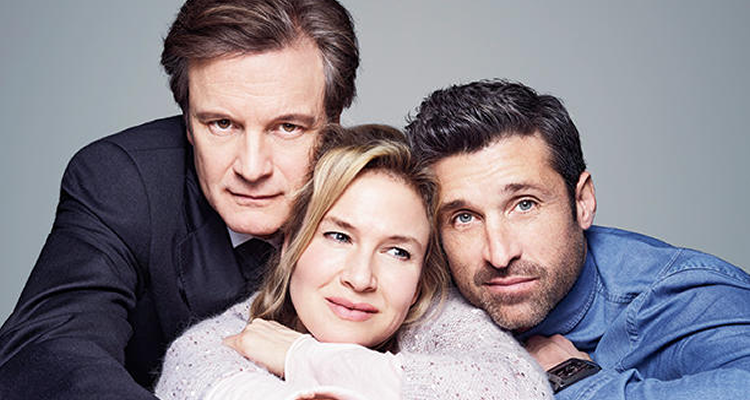 photo by Entertainment Weekly
Which is why Bridget Jones's Baby is a huge deal. It had a lot of making up to do.

Five years after Edge of Reason, Jones and Darcy are separated after their relationship suffered from fatal incompatibility. Sharing individual one-night-stands with a billionaire love guru Jack Qwant (Patrick Dempsey), and then Darcy, their lives are thrown for a loop when she becomes pregnant.

Back with director Sharon McGuire, and new writers (including Emma Thompson), this threequel returns to basics as best as it possible. Most of the story comes across like an hour-and-a-half episode of Maury but manages to draw out the tension and humor of who is the father is, and making the best of an awkward-as-ass situation.

It also allows Zellweger to come back with playfulness and maturity as Jones's story comes full circle. Her expectations still might not match reality, and her pregnancy exasperates the choices she thought she'd have in her mid-forties. The story explores how it's okay for her to want what her friends have in terms of the possibility of being a single mother, maybe a spouse, but also being responsible for someone other than herself or an unrequited partner. Family helps free herself of what society thinks of her being a spinster, or pregnant, or married or any label. She's also earned professional achievements, is hardworking, still a bit of a klutz, cheeky and fun-loving as we've liked her and seen her grow.

The story has a great balance of drama and comedy too. Jones's pregnancy means something to everyone: to Jones, to Jack who avoided love despite being a mathematician at compatibility, and Darcy finally fighting for Jones. The trio's preparation for the baby's arrival drums up a refreshing rivalry that joins the likes of Cleaver vs Darcy and who she might end up with.

Like the first movie, this one gives enough for Darcy to do. While the script dials up his incapacity to express himself a bit too high, Firth is able to balance it out with some truly fantastic scenes. Nearly all of Darcy and Jones's moments add to the gravitas of their complicated relationship. Though Darcy's feud with Jack could've felt like a cardboard cut-out of the old showdowns against Cleaver, iconic fist fights are replaced with subtle cultural jabs and the necessary chivalry to put Jones first.


Bridget Jones's Baby was a great way to cap off the series, or what I hope remains a trilogy. The movie mixes familiar faces with new challenges. Even if its tone is more like a light-hearted drama than a laugh-riot, this sequel is worth it.

Rom-coms may have a predictable formula: Women and (typically) men meet, they fall in love, say I Do, etc. In the face of relentless superhero and action franchises, this series achieved a pretty incredible feat: millions of book copies sold, three regularly printed columns, and a billion dollars at the box office. Though a great deal of Jones's journey is enveloped by her self-inflicted and societal validation from men/a man and renders feminist and anti-feminist debates, these movies are all hers: exaggerated, love-obsessed, self-improving, touching, funny, and imperfect.  Here's to Bridget Jones, always a legend.

Bridget Jones Diary ★★★
The Sequel That Shall Not Be Named ★
Bridget Jones's Baby★★★
Have you seen the Bridget Jones' series? What are your thoughts?
at November 28, 2016