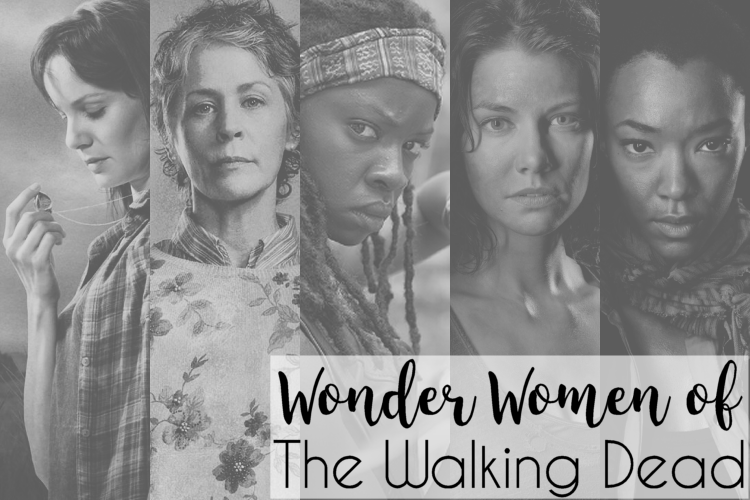 In the first edition of celebrating women of The Walking Dead, we evaluated two controversial survivors: Lori Grimes and Andrea. I personally love them both and it was fun to dissect how the writing served them in the best and worst ways.

Each character on this show handles surviving the apocalypse differently. What works for one person may not work for another. There may be no better example than the Greene sisters, Maggie and Beth.

In a previous post here I've explored Beth Greene and her underrated layers as a survivor until the fifth season. For this post we're focusing primarily on the elder Maggie, and compare how they were both similar and different in terms of adulting in the apocalypse.

We're going to take a look at how awesome this woman is, and how the flaws and achievements of the writing shapes them. Hope you enjoy!

gif
Making her debut in season two, Maggie appeared to be a very sheltered farm girl. Beyond the faith of her family, not just religiously, but also that zombies were just very sick people, the walking dead community learned to not judge books by their covers.

Some of the first things that come to mind when thinking about Maggie is her tenacity and an ability to stay sharp but grounded. When Herschel was tending to a wounded Carl, she dove into action to find their camp and bring back Lori. When the group needed supplies, she accompanied Glenn into town. It didn't take very long for them to encounter a walker and for her to recognize what they were: undead and not ill-stricken memorials of loved ones. Unlike Beth who was rightfully traumatized, Maggie's mindset was: how do we fix this and how can I serve the community?

A good portion of her beliefs is passed down from her father, Herschel - a recovering alcoholic turned turned devout Christian and eventual moral compass to the group. But a fair share of her mindset and behavior is outspoken and bold. She's rooted in community but she's not afraid to speak up and share what it on her heart or mind.

Case in point when Rick and the group's time at Herschel's farm also spurs romance. In making runs to the nearest town, Glenn and Maggie strike up a romance. It starts off as eleven minutes in pharmacy heaven but grows into a beautiful, supportive healthy partnership. When Herschel pleads with his daughter that the group will eventually leave and he just refers to Herschel as the Korean Guy, Maggie isn't afraid to remind him of his very own principles: A new command I give you: Love one another. As I have loved you, so you must love one another.

Like her partner in the apocalypse, no matter what occurs they find their way back to sanity, and perhaps, never even leave it. When she and Glenn are captured by the Governor in season three, she's sexually assaulted. Respectfully, she removes herself from the group to process what happened. This happens not too longer after she had to perform a c-section on Lori, which resulted in her death.

And, every character has lost loved ones, yet there probably isn't a family outside of The Grimes clan who has lost everything right before viewers eyes except the Greenes. Their farm was disintegrated into ashes. Herschel lost his leg, and then was beheaded by the Governor. Maggie was separated from her sister Beth following the prisons' destruction, and then robbed from a reunion when she was killed.

These events don't even cover what takes place along the way in terms of everything the group faces: the death of both her father and sister, other community members, and always fighting. Her way of staying sane is finding meaning in the suffering, and she doesn't allow fear to ruin her being alive.


All this time running from walkers, you forget what people do.

Maggie has lost everything but she keeps moving forward focused and determined to keep making progress. She's achieved this by establishing great relationships with other people. Her and Sasha find common ground through their pain. Tara earns her forgiveness when she was on the Governor's side when he killed her father and destroyed the prison. Michonne and Maggie and support defend each other. Carol and Maggie assist each other on the battlefield. And, she shares a lot of parallels with Rick, who recognizes her diplomacy and strength.

The only crime against Maggie's development is her forgetting about Beth for nearly two seasons. This is essentially a writing issue since the powers-that-be chose to keep them separated. There was always a convenient conflict to keep them apart: she initially searched for Glenn because she knew where he would end up when the prison fell; when Daryl and Carol discover where Beth was captured, she and Glenn are already on their way to Washington D.C.; they conveniently rejoin the group only after Beth has been killed. It wasn't just enough that Maggie witnessed her father getting killed, but then after separating from her sister, she never spoke about missing her sister or where she was (except one time with Daryl). This isn't something to put on Lauren or Maggie's shoulders because it's fairly common for female friendships/relationships to come and go very swiftly.

Maggie stands up as one of the most layered characters throughout the series. With this aside, I'd consider Maggie a secondary leader under Rick but alongside Glenn, Michonne, and Carol. She easily became a viable replacement for Deanna who believed she could run Alexandria, and Rick knows Maggie is capable of gaining leverage over the Hilltop Colony. Her diplomacy earns respected by community members and she's never one to back out of a fight or do dirty work.

Maggie's best weapon of survival is her faith. It's not waved in everyone's faces, nor does it really need to be. She'll wield it with determination to kill her way out of tough spots, and she uses it to help her keep going. It's what kept her going during all the times she and Glenn were torn apart, and to start her a family of her own.  She's used it to help characters find forgiveness for themselves like Father Gabriel and Sasha. She has the heart and mindset to strategically survive as well as the capability to kill both humans and walkers if necessary. Fear is what might keep the survivors alive and alert, but it doesn't stop her from living or do the job she's called to fulfill.

A Side Note About Beth
A lot of Beth has been written about here, so I won't go too much into the same details. However, since that post was written before her death, I wanted to take a second to talk about her death and the misconception that she was weak.

Like sister and father who shows defiance against wrong-doings, Beth does too. Their methods are just a little different. The younger sister's biggest show was her last stand against Dawn at the Atlanta hospital in the fifth season, which wrongfully ended in her demise.

Dawn and the cops chose people that were physically broken and emotionally ready to submit. She and the other cops bided their survival by manipulating, abusing, and grooming people to be at their their beck and call. Beth quickly understands how the hospital operates, and she decides to stand up against tyranny. Because of Herschel she recognizes mistreatment when she sees it, and with Daryl's brief instruction, she's trained enough to get away, or at least let Noah escape.

Up until the last exchange against Dawn, she continues to show up the different cops. She killed two cops to protect or come to the rescue of others. (This is a record that even another cinnamon roll Glenn never achieved). Through this and being at Dawn's side, she's aware about the abuse of power. Dawn is threatened by Beth's strength since she already tried to escape and won't be tamed.

In their last stand-off when Rick exchanges the cops for Carol and Beth, Dawn makes a power play for Noah because he's been subservient to her before. He knows her game too saying the exact same thing Beth does ("I get it nowI get it now") and is ready to accept his fate.

Now like Lori and Andrea (and later Deanna, Jessie, and Denise), the writers poorly took advantage of Beth to repeat bad habits: use several episodes to develop a character more thoroughly and ease viewers into liking them more, only to kill said person off. In fact, Beth's arc very closely follows Andrea's in terms of overcoming depression and a desire to die, trying to find her place in their family, and 'sacrificing herself' to save others.

Beth's stand against Dawn was building up to something great. But it would've been better if there wasn't so many thoughtless out-of-character mistakes along the way - like trying to use medical scissors to stab Dawn in the collarbone.

Does she know Dawn will defend herself? I like to think - yes. But unlike fellow survivors who make as calculated risks, Beth takes a definite gamble. Does she consider her entire group could get slaughtered in the process? I'm not so sure. Why didn't she go for the jugular instead of an armored shoulder? At this rate, we just get more questions than answers from the creative team. But to the former extent, just like letting Noah escape, I like to think Beth's nonsensical attempt in taking out Dawn will save everyone in hospital and give them freedom whether she's dead or alive.

I get it - the name of the game is surviving, so weak defiance resulting in your death doesn't mean much. It was not the smartest move but there's nothing Beth or Emily could've done except to follow through with her preordained fate. In relation to her family's history of risking your life for the hope of a community's stability and future, it was still slightly fitting for the songbird to go out on a few bittersweet notes.
at September 14, 2016