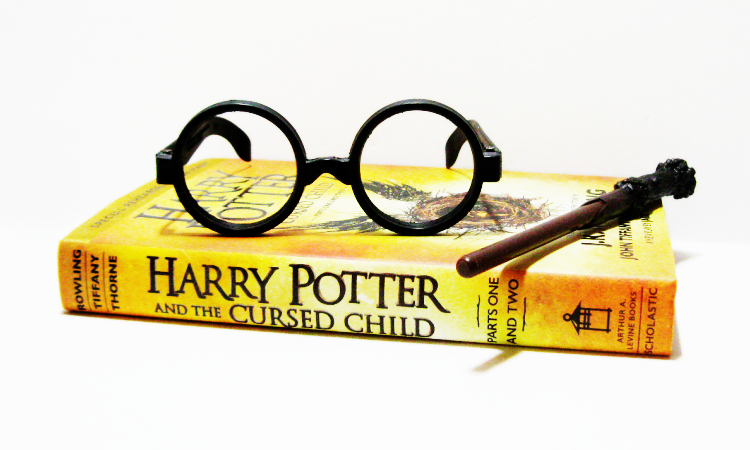 Harry Potter and the Cursed Child is finally out. It's the official eighth installment of J.K. Rowling's fantastical world as Harry Potter, Ron Weasley and Hermione Granger pass the wand off to their children's experiences at Hogwarts. The book is a companion script to the play that will be begin on the London West End.

On Harry Potter's thirty-sixth birthday, the special rehearsal edition of the play was published. Of course, I lined up for the midnight release party and was super excited to be apart of the phenomenon once again. Even though we're encouraged to "keep the secrets", the play is public now and I couldn't help but want to share my thoughts.

WARNING BEYOND THIS POINT - this review contains spoilers.

Set nineteen years after Deathly Hallows, young sons Albus Potter and Scorpius Malfoy form an unlikely friendship as they struggle to live up to their families' legendary reputation.

The duo goes to great lengths to step out of their parents' shadows. Potter, who is sorted into Slytherin instead of the favored Gryffindor house, becomes an outcast while Malfoy is bullied by swirling rumors about being an illegitimate heir to Voldemort. . . .

Much to the chagrin of the Potter and Granger-Weasley clan, Albus's friendship to Scorpius helps them gain access to one of the last remaining Time Turners. When the try to change the past by preventing Cedric Diggory's death, their choices set off a domino effect with the series's history as we know it.

Cursed Child's initial publication as a play is both a blessing and a curse. As the former, we can breeze through events deeply enough to fill two acts and for the lucky fans who get to see it live on stage. As the latter, the plot puzzlingly (to say the least) beats far-fetched ideas plots and established characters in the original Harry Potter books, that it's almost difficult to take the play's story seriously.

It becomes obvious from nearly the beginning that being consistent with the original books is not the main intention of this eighth story. Non-canon stories can be as imaginative as they want, but typically, there is sufficient text for fans to try to back up their cases. Here, Cursed Child isn't just merely non-canon; it manipulates the history of the wizarding world as the authors would like, and the result's worse than a fanfiction gone wrong.

Most importantly, where the story starts off on the wrong foot, is J.K. Rowling with Jack Thorne and John Tiffany's choice to use the Time Turner as their main plot device. It's well-known Rowling has admitted multiple times she regretted creating the object in Prisoner of Azkaban because it opened up plot holes about why a professor would give a kid the ability to turn back time just to attend more classes when it could've been used to kill Voldemort, among other events. On top of which, the time turners were all destroyed in Order of the Phoenix so they couldn't be a hindrance in the books any longer... So why after the series is over are they being used again? and why aren't they used effectively.

While Harry and Hermione used the time turner effectively to save Buckbeak and Sirius Black, Cursed Child uses the objects because it can; not because the characters can do something useful with it. As teenagers, Albus and Scorpious are facing horrendous allegations and stigmatization in school; Scorpious in particular loses his mother in a mysterious death and faces rumors that Voldemort is his real mother. And yet they're in possession of time turner, and they choose to save Cedric Diggory? because his death is what made Voldemort become evil? because that is when their parents unknowingly messed up their lives before they were born? It doesn't make sense.

Their choice to save Cedric ends up messing up with future events, so the boys go back and try to change what they messed up, rinse and repeat. Throughout we see variations of what could've happened in the original books Back to the Future style:  Hermione and Ron not getting married, Voldemort rising to power after Harry is killed during the Battle of Hogwarts, among others. Some details are cool 'what if' moments but the conglomeration of familiar faces returning in other histories, and repeating the teens' actions over and over again makes the story repetitive and out of character for the series we love
None of it makes sense.

If I could get the authors anything, it'd be a few gold stars for at least trying. What I did love about the story was the actual next generation characters such as Albus and Scorpious. As Dumbledore once said, “It is our choices, Harry, that show what we truly are, far more than our abilities", who the young boys decide to become is the center of this journey. Albus and Scorpious' misadventures brilliantly explores the differences, misunderstandings, and detachment teenagers with their parents often suffer. You get a real sense of Albus and Scorpious wanting to find themselves separate from their parents and expectations they're pressured to live up to. Through them, their fathers Harry and Draco discover their own means of parenting. Cursed Child hones in on breaking the cycle of compartmentalizing what "evil" looks like and raising the next generation differently.

This approach is also reflected with Delphi, a fascinating new addition but also the biggest and most frustrating issue. She is the result of an untamed force of nature without parental guidance striving to take her place as the rightful heiress next to the Dark Lord. Meaning: she is Voldemort and Bellatrix Lestrange's daughter. Like the tabloid-esque whispers of Scorpius' real parents, this aspect of the storyline felt very self-inserted rather than something meaningful. While tiny amounts of evidence supporting this possible hook-up can be trailed (if you want to believe it so badly) in the previous books, no amount of reasoning can wrap my brain around BLT and No-Nose getting it on. I laughed for a good five minutes, and this wasn't the first time my eyebrows shot through the roof with the story. It often feels so rare that female characters are villains, so that might've been my main attraction to Delphi, but this almost ruined my ability to understand what the author's intentions were.

Because of the acclaim the West End show is receiving, one can only imagine how the magical elements on the page come to life. The book works as a play, mostly because it incites fans who can't see the production to only want to see it more, which will undoubtedly lead to re-reads and trips down memory lane. The story is a breezy read, and the stage directions of how the characters will move and use magic on-stage is definitely intriguing to see it in person. The production design on the page is definitely worthy of the real acclaim it's receiving.

However, a new challenge emerges in accepting how this edition fits into the wizarding world as we know it. For many, it will be very hard. After the seventh book was released, many fans believed Deathly Hallows was the last exploration of this story because Rowling declared she may or may never return to the wizarding world in future projects. Allowing closure to fill the space of the series coming to an end is almost what makes this story that much harder to understand. What was the origin of this story that needed to be told? There's certainly better fanfiction out there that could've fulfilled the coherence lacking here. Outside of the lovable next generation kids, it's hard to pinpoint a satisfying answer. As a rehearsal script of Rowling's collaboration with Thorne and Tiffany, it isn't perfect - Cursed Child certainly has wings, but it struggles to take flight.