Back Off Man, I'm a Feminist 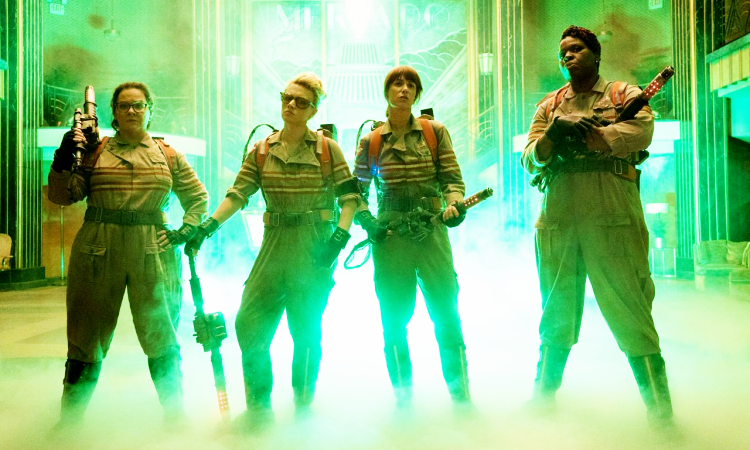 The original Ghostbusters is one of me and my sister's favorite movies. It's right up there with other movies like Back to the Future that we watch, quote, and analyze all the time.

When news broke out about a Ghostbusters reboot, frankly we weren't surprised. Hollywood has been and will be remaking movies. Studios and producers are always up for revamping any kind of classic for a younger generation while also ignoring that the genre can be a tiresome idea.

Negative reception of the new version before the movie even reached theaters was, in fact, disappointing but again unsurprising. Unlike other re-imaginings that only get a whisper of unflattering reviews, Ghostbusters was put through the ringer of overwhelming misogyny.

Fanboys by the masses opposed the reboot to one of  'their' beloved favorites. Not just opposed the movie but absolutely vilified it and the cast. Their reaction reached new heights of erratic behavior: IMDb was flooded with one star reviews, conspiracies were created about Sony paying off reviewers, and made the new trailer the most disliked in YouTube history, dowsed the cast in vitriol backlash - to say the least.

It can't be denied that in film, books, and television we need other stories that don't focus solely or for a majority on the male's version of the hero's journey. Fiction is a reflection of the real world; it's universal and doesn't apply to just one kind of person.

When we go to the movies, we look for a good break from our regular lives, looking to escape, for a reflection of ourselves or where we are in life, to be entertained and/or enlightened. As a woman, I look for people who aren't there to be no-named sought after hotties whose only lines in a movie are to say No to a guy who won't take no for an answer and then inevitably gives in because he won't leave her alone.

As Viola Davis said upon her 2015 Emmy victory, "You cannot win an Emmy for roles that are simply not there..." Well we can't see movies with women if they aren't there.

One only has to look at the success of Rey in Star Wars: The Force Awakens, the complex nature of Mad Max: Fury Road, or the incomparable success of Frozen as examples of the importance of roles for girls of all ages. And, Ghostbusters is no different. Seeing women playing scientists and ghostbusters will give women and young girls something to identity with and vicariously live through.

Opportunity and equality is what levels the playing field. 30% of speaking roles belong to women, so it shouldn't be a surprise when we ascend upon the hogged platform and set up our own mics for a fellow audience that is surely craning to listen.


Films with all-male casts get the star power and the "original story" but aren't touted specifically because they are men. Everything is just accepted as if it's law. They're just marketed and believed as bad-ass, funny, smart, action-packed, and capable as is - so why can't women enjoy the same?


When movies star anyone besides the typical male star, they are the special snowflakes of Hollywood that were created by osmosis. Movies shouldn't be compartmentalized into a girl's thing, and instead women have access to tell layered and entertaining universal experiences. Case in point, rumors about an Oceans' Eleven reboot have been circulating. Sandra Bullock and Jennifer Lawrence have been attached without any further confirmation of its development, except again that it will star an all-female cast. This gives me hope that a heist film with women might actually utilize actresses to play roles other than love interests.

Case in point: The 1960 original starring the Rat Pack (Frank Sinatra, Dean Martin, Peter Lawford, and Sammy Davis. Jr.), practically the only woman is Angie Dickinson as Sinatra's wife, who is given little to do in terms of the heist or her husband's cohorts. Likewise, Steven Soderbergh's 2001 remake limits roles for women as spouses with little agency such as Julia Roberts to George Clooney and Catherine Zeta-Jones to Brad Pitt, and an independent and powerful right-hand woman (Ellen Barkin) who is tricked to beg Matt Damon for sex. It's embarrassing that nearly fifty years passed, and the results are the same: if the women were removed, the plots could go on as if business was usual.

The lack of depth a female character is not given isn't right. But we can't go back in time and change the original, and we shouldn't want to solely because they had male casts. Just like literature mavens have to contend with changes of their beloved books when they're adapted to movies, we must be able to separate remakes from originals. Rarely does the makers of the former want to eradicate the former; everything is just about expanding on the other and growing it. I's okay to watch a movie, know the era it originated from, the gender politics of this time and then, and be aware of the differences (if even rare ones).

Unlike the initial ugly reception of the Ghostbusters reboot, it would be great to see a heist film, or film in general with women that exclude the emphasis on gender but instead focus on the material, strength of it's script and direction, the talent (not looks, race, weight or age) of its cast. A movie like Ghostbusters is just the beginning. Certain critics, official and unofficial know how to do this, but not enough. (The surface hasn't even been scratched for movies with racial diversity, LGBTQ community, trans community, people with disabilities, etc.)

As a fan culture, a territory has been marked around 'the classics'. If anything happens to selected untouchable favorites, well, it's just forty years of darkness, earthquakes, volcanoes, the dead rising from the grave, human sacrifice, dogs and cats living together, mass hysteria...Only it isn't. This reboot could've been something the pre-emptive haters enjoyed if they looked past themselves to give it a chance.

Women's contribution to film shouldn't be devalued and discriminated. Gender equality within entertainment, within the world, can be accomplished if we just make the right calls.
at July 15, 2016