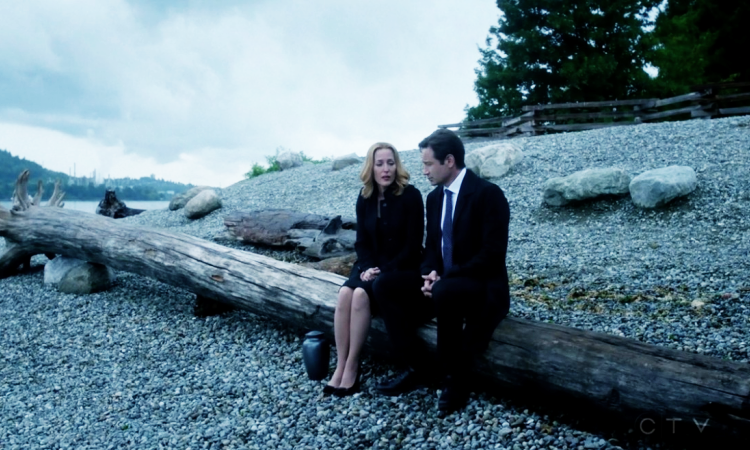 Coming off of the heartwarming monster-of-the-week episode Mulder and Scully Meet the Were Monster, the X-Files took a somber turn with its latest episode. Director and writer Glen Moran combined an unknown force known as the Trash Man, and a solid focus towards Scully with her mother and as a mother.

In Home Again, the agents are sent to Philadelphia to investigate a serial killer connected to the homeless. Stuck between the streets and the city laws, dozens of homeless men and women were being shuffled around the city like cattle - until the local officials are mysteriously killed by a mystery assailant who swoops in and out of a garbage truck.

Just as the case gets underway Scully is called back to Washington D.C. where her mother suffered a fatal heart attack. Left stricken at her beside, Scully tries to stay strong as her mother mysteriously calls out for her long-distant son Charlie - whom she hadn't had contact in many years. Trying to focus at the task of hand, Scully struggles with her own regrets as a mother.

For the revival, it's been an explored subject that Scully had to give her and Mulder's son up for adoption in the original series. Now that so much time has passed and they've returned to the X-Files, Scully's plagued with doubts if she made the right call. With her mom lying in a near-coma, she feels like there needs to be said between them. Scully struggles to understand her mother's outreach to her brother, who's been a distant relative to the family.

What I really liked about the fourth episode was the combination of the 'monster-of-the-week' as well as focusing on Scully. While last week's episode was definitely more light and heartwarming, this took a darker turn. The Trash-Man and his link of killings brought back the good ol' days of the XX-Files that took take something normal and twist it into something truly creepy. Tall, scarred and with a bandaged nose, he snuck into the night to twist his assailants into literal trash.

I wouldn't necessarily say this was a strong episode. Was it better than last week's or the first two episodes? I'm not quite sure. The revival itself hasn't really returned to the pace of the original series - which is not something the actors could be expected to repeat. The chemistry and emotional intelligence is still there as they return to their characters, but the episodes themselves feel a little slow-going - not bad, or terrible. But I wonder, if this one revival is the only revival we are going have, has the material been the absolute best? I can't give a definitive yes, yet. That's perhaps is the biggest quandary.

The nastiness of the Trash-Man's crimes were both scary and chilling, but it didn't necessarily mar Scully's side of the plot. Gillian Anderson hasn't had a lot to do with the revival so far since much of the episodes centered on Mulder. In regards with her dealing with her mothers' condition, she gave the sorrow and confusion we were reminded of throughout the original series. The biggest difference now is that she is deeply experiencing the turmoil and void of Williams' adoption. The void of his William's presence and Scully's struggles with her mother is what really created the emotional impact and made the episode memorable.
at February 14, 2016

Email ThisBlogThis!Share to TwitterShare to FacebookShare to Pinterest
Labels: television shows, the x-files