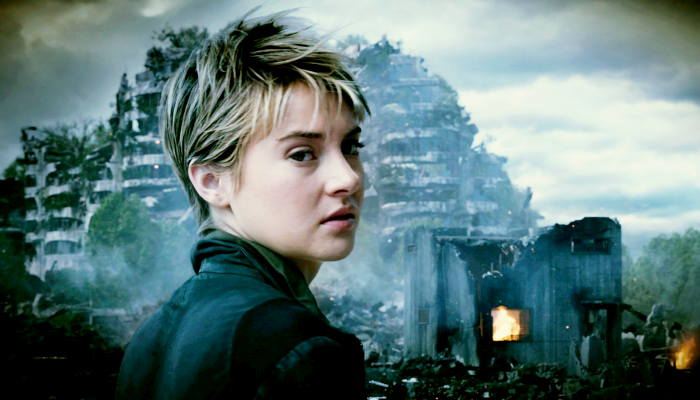 For a teenage-dystopian film in a sea of teenage-dystopian films, how does it stand out from the crowd? As a person, how do you accept your individuality in a world that shuns your differences, or in Tris Prior's case hunts you down? Insurgent addresses these ideas as it reunites us with the franchise created by author Veronica Roth.

Civilians of a futuristic Chicago are sorted into a faction system based on five virtues; honesty, amity, selflessness, bravery, and intelligence. Heroine Tris Prior, who defies the norm by qualifying for more than one faction, is on the run from the power-hungry leader Jeanine (Kate Winslet) trying to eradicate those similar to Tris. The clash between an immeasurable hero and the society that can't confine her will inadvertently unlock secrets about the fate of their secluded world.

Taking us back to the Divergent world established by director Neil Burger in 2014, director Robert Schwentke separates this sequel from its predecessor. Every sequel gets a much grander stage than its prequel, and the sets, special-effects, and costume are not just familiar from what we've seen before but are improved upon. Amplifying its special-effects  and packing in much more gunfire, the action-packed scenes balances an empathetic portrait of Prior and delivers enough interest for the next installments - for readers and non-readers alike. With Schwentke attached to the next two installments, I look forward to how this world is going to grow.

While the film holds up in adventure, it also succeeds in bringing to light an individual defying the stereotypes of her society's enforced conformity. Like a million similar heroes we know in books and films, Prior is in search of accepting her identity. Defined as defective by the world, her evolution is not degraded or dumbed-down by other characters telling her who she should be. Instead, she is figuring it out for herself and that is the main draw. Though some of the script is not entirely organized, Priors' defiance of categorization is satisfying and rewarding as a viewer.

A great credit for the authenticity of the leading lady is Shailene Woodley. For such a young actress, she remains a versatile and intriguing talent. Equally, her main counterpart Theo James, continues to be a refreshing partner as her character's love interest, Four. Their relationship is not about coddling each other or playing cat-and-mouse with each other's emotions, which has tarnished the young adult genre. Together and alongside so many other members of the cast, the actors boost each other's performances and characters. Even if the story is centered around Prior, the film does not selfishly hold Woodley hostage to be a one-woman show. Everyone gives validity to their role whether it's leading or minor.

As a reader of the series, my only main con is that the translation of the world-building could have fared better. This is something I struggled with even when reading the novels, so the films are not necessarily to blame. The script does improve upon the motivations of Jeanine's hunt for divergents from the first film, however it can still feel disordered at times. While I truly look forward to Allegiant Part 1 and 2, part of my gripe towards the YA genre overall is that one story takes four movies to complete. Is this a fandom I love to be apart of? Sure, and each Divergent installment feels like its own stand-alone film. However, it's the in-between sections where I start to feel impatient towards the studios' prolonged cash-grabbers.

The Divergent Series is not trying to compete against the untouchable pedestal that has been emphatically (and wrongfully, in my opinion) gifted to The Hunger Games franchise. Instead the films are constructing their own world and heroine as best as possible. Compared to other aspiring series that were complete bombs due to horribly weak scripts or non-interest by audiences, Roth's series is managing to carve out a name for itself. The success of the series may not be in its ability to create a franchise-making logo of a bird encased by an inferno but the praise-worthy showcase of a layered heroine, visual aesthetics, and talented cast.