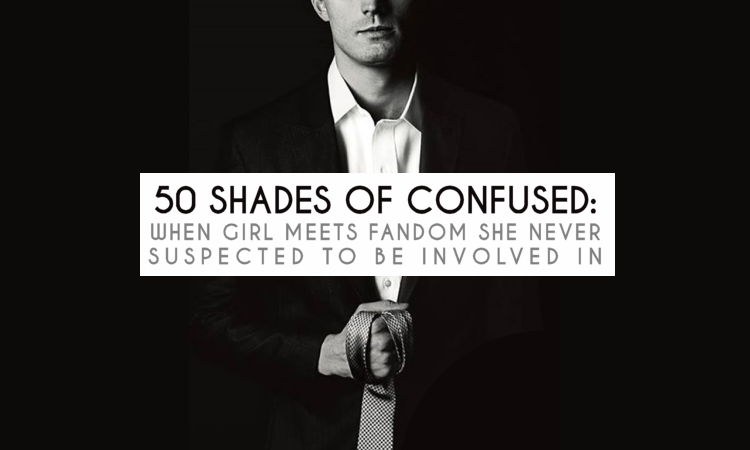 Excluding a few excerpts I heard online and around friends, I had no idea what the Fifty Shades of Grey phenomenon was in 2011. The sweeping story of Anastasia Steele being swept off her feet by a control freak and "BDSM" millionaire Christian Grey didn't sound special, let alone memorable. Yet the series pulled in sales by the hundreds of millions and attracted just as many genuine readers. Parodies and celebrity readings went viral while targeted quotes haunted aspiring writers. Criticism of author E.L. James was less than favorable, and for the adult world of literature, the buzz for her series was as big as the magical obsession many bookworms had towards J.K. Rowling's Harry Potter.
If you follow me online, and put up with my incessant reblogs, you are well-aware of my current obsession with Fifty Shades of Grey. But, as obvious as my interest in the film might be, you can also call me Fifty Shades of Confused. I still don't know how I became obsessed with this series, even if most of it is directed towards movie.

What would a series where the author and editors copied and replaced the names Bella and Edward from Twilight into a literary sensation have anything to do with me? Three years later when the first movie teaser was released mid-2014, a little inkling of curiosity sprung out of nowhere. My excuse, was: HUH. I like the trailer. *fifty views later* Okay, I really like the trailer. Maybe in February I'd want to see the movie. Well, if I see the movie, I have to read the books. OMG, FIND ME THE BOOKS. THE MOVIE IS COMING OUT. I NEED IT NOW.

Through the library and my sister snagging bargain copies, I was able to breeze through the books (all 1620 pages) in less than six months. When I finished James's trilogy, I came away with a new understanding of its peculiar popularity, but also still felt I had earned a I Survived Reading Fifty Shades of Grey t-shirt. My reaction (not really the gif above) was a mixture of curiosity and confusion that transformed into acceptance and defiance.

It's no secret: the series's writing is atrocious. Not only does James's ignite controversy over consent, abuse, and misconstrued power dynamics, the basics of good storytelling are skewered by not capturing well-rounded or dynamic characters. With a complete lack of syntax and decipherable grammar origins, it's beyond science how a popular fanfiction went from internet sensation to literature and now film history.

What's left is the sex. Lots of it. But what's with the sex? Sex is sex. Some of it was hot. Some of it not so much, mostly veering on creepy stupid as well as tiring. Unable to find any compatible interests or have dynamic personalities, 95% of Steele and Grey's affair is not romantic because they jump each other whenever there is a lull or "intense" moment of conversation. Their relationship is an emotional vacuum of psychological red flags perpetuating endless tournaments of humping. Enough of it is generic to attract the boring reader or for therapists to dissect what is wrong with these characters for the rest of their careers. Somehow in between it captures readers attention to spice up their own lives or believe Christian is willing fulfill Ana's biggest fantasies that womankind themselves want.

In looking at the characters themselves, neither of them are hardly dynamic enough to warrant thought-provoking rants or raves. Christian is controlling, abrasive, and withholds an emotional connection until he gets what he wants physically. As controlling as Christian is, Ana is equally nutso, fervently jealous of everyone that looks at "her man" where her state of mind can't narrow down one of thirty sub-conscious/inner goddess personalities that are always seeking validation. Pass all of the chapters where they go at it like rabbits, or emotionally abuse each other, both are basket cases with few characteristics that make them enduring or memorable.

The only worthwhile quality they ignite are debates about misrepresentation of BDSM relationships, rape culture, abuse, feminism, child molestation. Is it a love story? or  so much more. It's impossible to even dissect the layers of issues I agree and disagree, and how they're poorly presented and examined in the books. If you have the time, this one is my favorite, and this one, and this one, and this one, and this one. However, that doesn't preclude the fact that a series unworthy of being taken seriously has become noteworthy throughout culture. James's relationship is nothing to be hypnotized by. Between a bad line here and there, and a scope of psychological issues could be analyzed if wanting to delve further than the surface-level smut: it's readable but it's not for everyone. 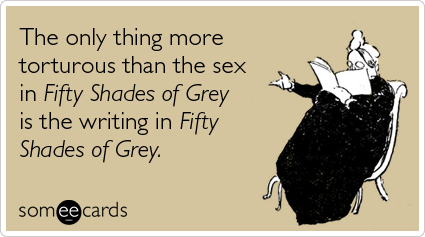 Even though the writing is deplorable, it's hard to believe just how mind-numbing the grammatical structure the series truly is. From confusing transitions between standard to UK English, repetitive use of synonyms, and it's complete lack of realistic development between Christian and Ana, the story by all means should be illegible.

Surprisingly, even though it's regarded as a fanfic work off of Twilight, the fact that it was inspired by Stephanie Meyers' series remains critically overlooked. While millions of young teenage girls and moms fell head over heels for Bella and Edwards' questionable relationship, the world was more concerned about Robert and Kristen's on-screen romance than the potentially damaging effects. The major one being that a young woman loses her virginity to a dead guy because he can't control himself unless she becomes what he needs her to be. As well, a power dynamic between a human and a supernatural being where the latter is constantly being spied on in the name of "love and protection".

Outside of its fictional origins, there is plenty of sources where women's agency is undermined: commercials, music videos, literature, television shows, movies, magazines, reality shows, The Bachelor and Bachelorette. Each dictate women's behaviors and sexuality in perspective to a man or other women they have to compete against. If we're going to start an internetz battle against Fifty Shades, we can't end it there because misogyny exists - period.

By putting putting Fifty Shades of Grey under the microscope, we should demand more from other genres such as romantic comedies, another source of "female entertainment" that's dismissed as unimportant precisely because its aimed at women. Did we need another trashy novel that adds to the already sexist material so ingrained in our culture? No, but it's out there. The best we can do is talk with younger adults and ensure they understand perimeters of sex and healthy relationships; we can talk to women without condemning or dumbing them down.

(gif)
Even though I managed to familiarize myself with the series and its inner context, I tried to figure out what made the trilogy so popular and controversial versus what my investment in the series was.

Some women read and enjoyed the books, saw it beyond the BDSM or anger issues Christian has. Some women felt Ana establishes power play in her own sexual identity in the later books rather than all of the anti-BDSM hoopla circulating the first book. Some women felt deprived in their own relationships and was fulfilled by Grey’s attention to Ana from emotional and materialistic to bedroom fantasies. Some women before reading the series will always feel it's their responsibility to cast aside a man's tortured past and dig beyond the brooding exterior. Some women were turned off by Christian's issues that were played off as a romantic quest for Ana to heal him. There were fifty shades of readers who love or detested this series. I became one of them.

On my end, the series fell into my lap when I didn't have any other major fandoms going on. Television shows lost their luster or had comfortably moved their way out of my life. Movies lacked exciting or hardcore fulfillment as hard as I tried to get into Divergent and find another community where the hype was strong such as The Fault in Our Stars. Fifty Shades happened to fit the bill. 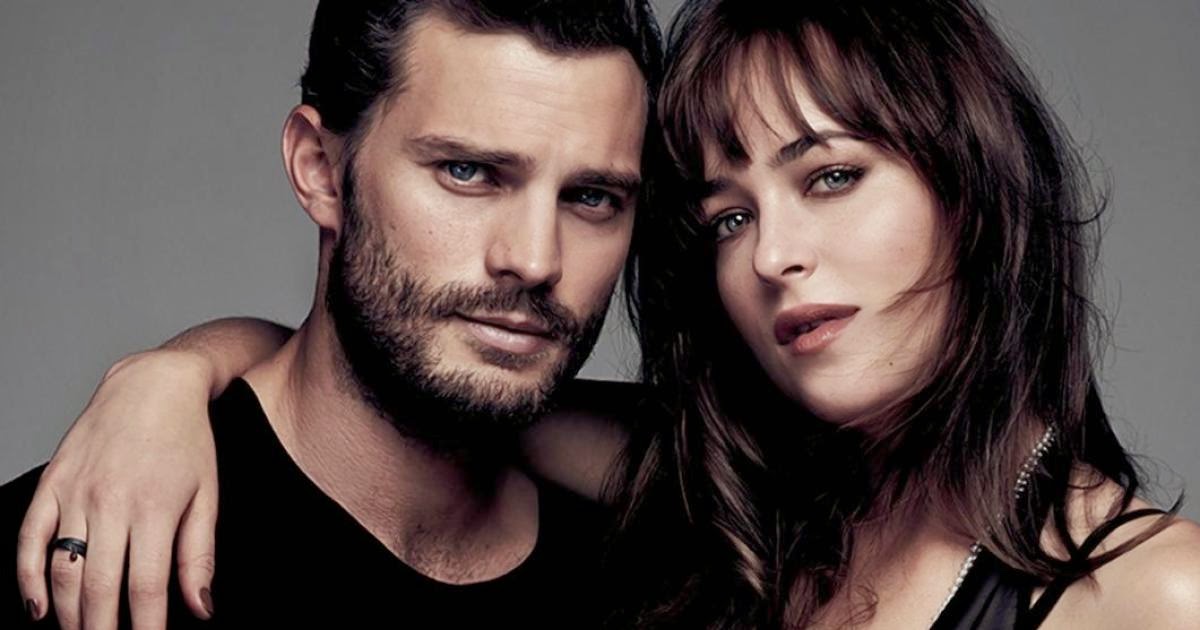 Now, this is when the movie comes in. It's perfectly cast (though I imagined Theo James a little more as Christian). Director Sam-Taylor Johnson is trying to do the film justice, and hopefully, the studios allow her to accomplish that.

Part of me wants to see it because it'll be refreshing from the onslaught of superhero franchises, YA dystopias, sci-fi blockbusters, typical romantic comedies, popular indies, or heavy-handed dramas.

Another part of me wants to see it in defiance of comments I've read online and heard on the radio of guys suggesting to hang out around theaters playing Fifty Shades because chances are women will be horny enough to go home with them. When women are sexualized in every medium imaginable around the world a million times over twenty-four seven, I get a little peeved that people assume our sexuality is wrapped up in whatever men deem is worthy of to ignore, make fun of, or take advantage of. I'm an adult. I can choose to see whatever I want.

Maybe Fifty Shades strove towards me and I didn't know what to expect. But I gave it chance, and on some level after recognizing the books aren't good, I soberly enjoyed itsy-bitsy parts: in total, like fifteen lines of dialogue or description, and drunkenly took silly joy in the rest. For someone who understands the intricate layers of the series' problematic nature, I gauge why I'm seeing the movie and don't need to be subjected to others' opinions about why or why not I should see it. Because I already know. Maybe, my tastes have become singular: Jamie Dornan. Shirtless. In High Def. On the big screen. Nothing wrong with that.