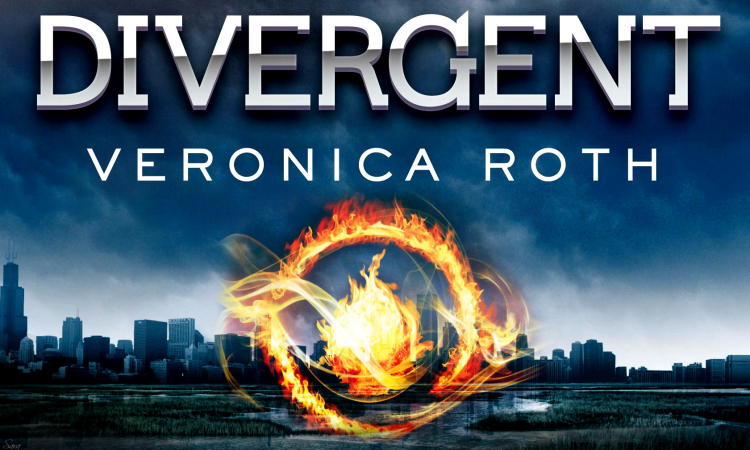 Set in a futuristic Chicago, a city is made up of five factions based on various virtues. As teenagers, your rite of passage into society is to take an aptitude test which shows you which house you belong in. If you're brave or smart you belong in Dauntless or Erudite, respectively. Or you may belong in Abegnation or Candor, if you're selfless or honest. And, there's Amity, which stays out of the conflict by holding onto peace. If you don't belong in any faction - which holds more value than your own family - you are Divergent.

Veronica Roth's series follows Beatrice Prior, a young woman who grew up in Abegnation and choose to join Dauntless. Her reasons, however, are skeptical. After her own aptitude results, she discovers that she is Divergent. The true faction that she belongs to is one that can't be controlled by the government, where its people live on the outskirts of the city, homeless, jobless, and without a respectable place in society.

By choosing Dauntless, Beatrice tries to form a new identity - changing her name, making new friends, and doing her best in her faction. Her odd position in-between factions leads her to discover secrets about the entire society and it functions.

Told in first person from Beatrice's point of view, it's hard to recognize the differences between characters and the factions. To be honest, the world-building is a mix of Harry Potter and The Hunger Games, and its writing blurs together. Despite the story centering on drastically different virtues, the characters from alternating factions sound and act alike. Fellow Dauntless initiates Christina (from Candor) sounds like Al (from Candor) who sounds like Will (from Erudite) who sounds like Beatrice. They try to be "brutally honest" with each other, yet are just throwing melodramatic insults and comebacks back and forth. Their tones rarely vary nor do their sense of humor or emotional responses.

And, there's also Beatrice's love interest - Four. In this new surprising world of pulling knives on each other and getting drunk (a lot), Four is the brooding mysterious leader of the initiate's training. Tris feels a connection to him yet can't pinpoint if he really likes her or not. She becomes his undoing of not playing everything close to the chest anymore, and he wills her to be strong enough to take care of others and lead a revolution. It's not a particularly engimatic romance, but it's just okay as far as young adult relationships go.

What Divergent struggles with the most is its own world-building. The reasoning behind why Divergents are so dangerous binds the book for its nearly 486 pages. A mysterious unrest within Erudite is slowly unravels as its leader Jeanne is raising an army of sorts. The motivations of which are skewed - she wants order and control among the factions, but she does it through brainwashing and chaos. Besides turning portions of society into mindless drones, she's not much of a villain.

Additionally, it was hard to take the baseline of what makes the factions work together and fall apart seriously. Dauntless members test themselves by  hopping on moving trains, physically beating each other to a pulp, perform through hallucinatory tests where they experience their greatest fears, get tattoos...and so on. There's no real line drawn between forcing yourself to be an adrenaline junkie or showing true bravery.

As an author, Roth is admirable for creating a series that has hit it big. While reading Divergent, I questioned which faction I'd fall into naturally and which one would I choose to join. On the same level of Harry Potter and The Hunger Games, her book contains unique interactivity between the words on the page and the reader.

Overall, looking at the writing, I found it to have poor world building, cliche prose, and a mix of popular aspects that worked for other series. I felt like the book was trying to push this idea of a personality divided society with very little to go on about why we should care about Abegnation, Amity, Erudite, etc. besides their individual traits - which made it hard to relate to the characters.

Perhaps if this book was the second of the series, where the first developed a relationship between the people and their factions I would've been more intrigued. Otherwise, it all feels a bit forced and not a strong debut  considering it's a literary young adult phenomenon. I think I'll be waiting for the movies to find out what happens.