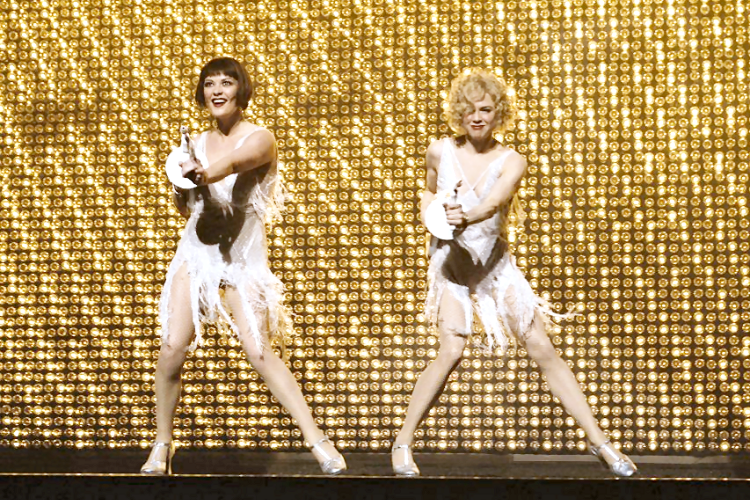 
From innocent wifey to fame hogging monster Zellweger portrays Roxie with just enough deviousness to make you believe she isn't as foolish as she appears, yet is so deranged you believe she can hold her own. Roxie Hart has big plans for herself. Snuggling up to her lover explaining her dreams of being an aloof nightclub singer despite having no real background in entertainment, I love how she imagines this persona of herself; to give her fans just enough to always leave them wanting more. It's just the start of some heavy delusional wishful thinking and impressive determination. Going to jail for killing her lover doesn't stop her ability to manipulate the public from behind bars. She steals the show for me all the way.

Almost exactly on par with Zellweger is her counterpart Catherine Zeta Jones as Velma Kelly. She can't be described as anything else other than a pure hellion. Having killed her sister for sleeping with her husband, Zeta-Jones portrays an unstoppable vixen who can't be beat in tap numbers or bloodthirsty justice for herself.

Together, the chemistry between Zellweger and Zeta-Jones is rarely matched on-screened today. Their performances radiate spiteful energy and thriving competitiveness as their characters battle to snag the bigger headlines and their "hard-earned" freedom.

Chicago grows to be more relevant than ever.  Today ordinary people grow an entire career off a popular YouTube video or with reality shows essentially standing around and doing nothing. The movie's gals are far from being morally upright as they killed people to be famous. But the theme of chasing your name in lights maddeningly reflects the current times we live in - how the media will build up stars in a flash, the trends of celebrities and the dissolving of others for superficial means. Society loves a star essentially their dramatic rise or eventual fall. Nobody gets there the easy way.

Comparatively, the song and dance numbers exemplify the characters' voracious deception and fantasies. Most numbers are draped in red or white spotlights, as if the devil and angel within each character on their on shoulder. They are always the center of their own glory whether that's passion, greed, hate, power, or jealousy. You can't help but feel that these women are somewhat bad-ass and also recognize that they are severely unhinged. With such an extremist range of production and set design, easily the cast from the leading actresses to Billy Flynn (Richard Gere), Mamma Morton (Queen Latifah), and Amos (John C. Reilly) could've been over-exerted pepped-up caricatures, yet their overblown arrogant motives make them seem realistic.

In hindsight for Oscar seasons of yesteryear, it's easy to look back and figure out or know exactly which awards should have gone to other movies. Personally I'm not going to propose that Chicago deserved all the Oscar statuettes it earned. On the contrary, I think the spotlight that was shown was a bit too bright.

Its editing by Martin Walsh may be one of my least favorite aspects. The performances and music exude enough energy on its own, and the camera tries too hard to keep up. It'll only settle for a millisecond before leaping somewhere else again and again. Its atmosphere creates an off-kilter imbalance that evens out as the movie goes on, however it's always infinitely dizzying at first.

I'm not so sure the performance nods didn't jump the gone on the hype too. Queen Latifah as Matron Mamma Morton is exceptionally humorous and powerful, but winning Best Supporting Actress compared to other nominees feels over-hyped. In contrast, it's surprising Richard Gere did not earn a Best Supporting Actor nod considering his Billy Flynn is incredibly deceptive as well as charismatic. It's hard to imagine other contenders such as John Travolta in the role, and that John C. Reilly earned a nomination; even though the latter's performance was heartwarming, it can also be quite monotone.

Similar to West Side Story, Easter Parade, and even Grease, we are emotionally aware of the characters' psyche. Going back to the golden age of big budget studio extravaganzas, Rob Marshall's direction temporarily reignited a rare quality in the musical genre. Marshall adapted musical legend Bob Fosse's script to this big screen adaptation. A grand percentage of the production such as cinematography exudes in an atmosphere most similar to Fosse's Cabaret. All of the musical scenes take place on a vaudeville/theatre stage with a captive audience interacting with the performer or even sitting absolutely motionless. Marshall's sequences, even if they aren't entirely his own, make sense in accordance to the characters' sense of mind and our own observant atmosphere as the audience.

Musical genre isn't easy to follow or love for many audiences. It's a challenge to let the fourth wall drop as an ordinary person breaks out into song about what just occurred to them or how they are feeling. Yet there is a realistic quality to Chicago which makes it a bit of almost every genre - comedy, drama, and musical. Compared to some of the most recent Broadway adaptations/remakes like Mammia Mia, and Hairspray, I find myself vying for the energy and tone that Chicago has.

Besides the music and performances the most addictive characteristic of the film is the aggressive ambiance. When the movie kicks off with Velma Kelly crooning to All That Jazz by herself (a performance she would've normally done with her sister), the vitality doesn't stop. Almost every track is worth listening to repeatedly. From Zellweger's incomplete ode to her husband Amos (Funny Honey), and Flynn's tap dance around a witness, selecting my favorite routine is almost impossible. Listening to the soundtrack on its own inspires me to watch the movie and vice versa. I can't do one without the other. For me, Chicago doesn't seem to strike as many sour notes.
at March 22, 2014