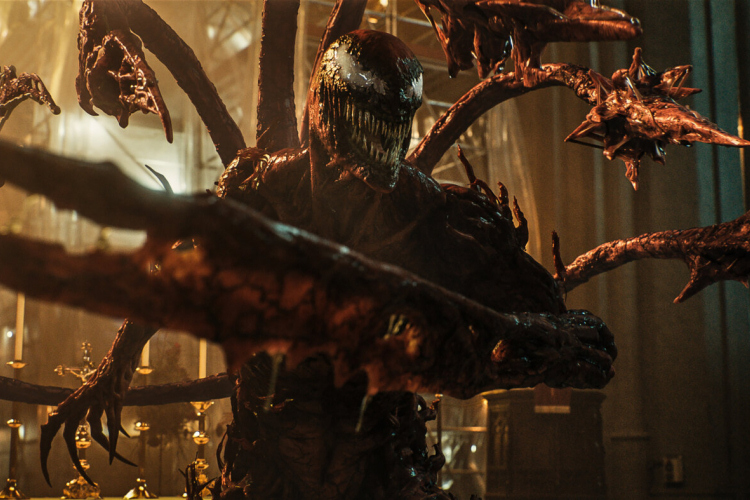 Eddie Brock (Tom Hardy) struggles to coexist with the shape-shifting extraterrestrial Venom. While on the verge of splitting up, deranged serial killer Cletus Kasady (Woody Harrelson) also becomes host to an alien symbiote that amplifies his psychotic behavior. Brock and Venom must put aside their differences to stop his reign of terror as Cletus strives to reunite with his long lost love Shriek (Naomie Harris).
The review below contains spoilers regarding the post-credit scene.
Venom: Let There Be Carnage was honestly one of my most-anticipated movies of the year because I enjoy the first one so much. The bar wasn't set necessarily low, to be honest, even in the wake of all of the terrible reviews since its release this October. I wanted more of Eddie and Venom's relationship, or double the Tom Hardy, and I got it. There were more than enough scenes where his real tattoos were peaking through his shirt collars, so that alone made me happy. But more than that, his performance as Eddie and Venom remained hilarious and heartfelt. Harrelson and Harris' relationship was sorely under-developed but offered enough layers for their crazy-love story to explode from the screen. And the action scenes featured some cinematography that manages to be refreshing in the ever-expanding comic book genre. As a movie goer, I'm at a point right now where I would rather choose an imperfect movie and enjoy its flaws, rather than suffer through boredom and tears to a formulaic film trying to be perfect. I couldn't help but imagine and looking forward to watching this back-to-back with the first film.

However, setting that aside, this is deeply flawed. Three different plots are taking place - Cletus Kasady's crimes, the cover-up of Shriek's death and her origins, and Ed/Venom's floundering relationship. Despite the fact that there's plenty of material to go-around, it's truly only the latter that's given room to grow. For everything else, the movie doesn't have time to flesh them out. The dialogue is spoken so fast it's like a tape-recorder stuck on fast-forward or the script assistant was holding a stop-watch. Once you settle into one scene, it's propelling to the next. The first two acts whirl by, that when the third act copy-cat battle from Spider-Man 3 hits, the pacing finally becomes steadier but tremendous whiplash kicks in. It's tough to recollect how much of the story leads to the ending because it feels like two seconds ago you  arrived to the theater.

In comparison, Venom's running time is about two hours, where its sequel barely hits 97 minutes. The former was far from complicated with its paint-by-numbers origin story. But still, directing an actor talking to himself and trying to convey that he's half controlled by symbiote isn't an easy feat. And that running time lets Eddie and Venom's coupling grow stronger against their feud against Carlton Drake. Serkis' direction picks up where Ruben Fleischer left off with dry humor and CGI-packed action that the tone between the two films is almost seamless. Serkis aimed for the film to be lean to be as lean as possible, but if anymore of the story had been edited, there wouldn't have been a plot. Kelly Marcel's script doesn't feel it's the culprit as much as it could've been. Her script maintains the same vibes as the first film, which she was a co-writer on. She's helming this material as the solo writer and doesn't have trouble reigning in the different threads so they come together in an explosive showdown. But, it's that editing prowess that hinders what could've been.
But after everything is said and done, once the post-credit scene arrived with Tom Holland's Spider-Man, the race through the entire movie became somewhat clearer - Marvel wanted to plug in Spidey's next installment releasing this Christmas. Granted, the pandemic hasn't made movie-making or movie-going easy. Plenty of movies' production schedule and release dates have been bumped up, delayed, rinse, repeat. Venom: Let There Be Carnage wasn't an exception. But, Marvel is known for pulling in audiences with its cliffhangers for the past decade. And someone lost confidence in the film on its own to take its time to do what it needed to do for its fans before jumping into Marvel's ill-conceived timeline for phase 4. Now with the semi-average streaming machine of the Disney+ shows, What If?, and Black Widow (I have yet to see Shang-Chi and the Legend of the Ten Rings or The Eternals), there's nothing inventive or spectacular about Marvel right now. Marvel's going through the paces of keeping up with its own trajectory, and now other titles are getting hit with the consequences.
Now, I'm not saying Venom was a game-changer, but it did carve its own space, even as a movie that critics loathed and fans loved. Somewhere along the way Venom: Let There Be Carnage starts cutting corners, sprinting between Brock or Kasady moving from place to place, and intention to intention, to the point that there was smaller in-between moments left on the editing room floor for no reason. Any semblance of scenes would've slowed down the pacing. It's more understandable for a film to be over two hours long and to know which scenes need to be cut than for a movie to barely graze the 90 minute mark and clearly see gaping holes where more could've filled in. The subsequent headlines and critics aren't talking about what the film had to offer or the potential it had outside of the post-credit scene like it did for the first installment - only what Kevin Feige has to say about the post-credits. The merge between Sony and Marvel's different worlds isn't going to be as seamless as one used to hope. And that's disappointing. Venom: Let There Be Carnage getting caught in the middle is a result of that.
Rating: ★1/2☆☆
at October 21, 2021 No comments: