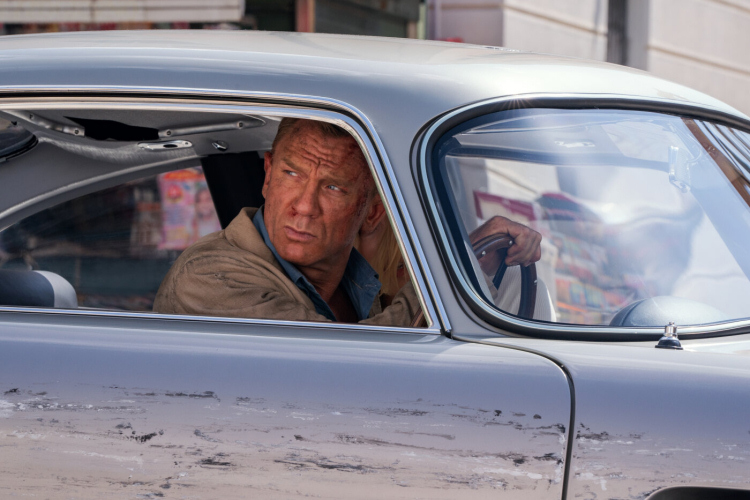 James Bond (Daniel Craig) is enjoying a tranquil life in Jamaica after leaving active service. However, his peace is short-lived as his old CIA friend, Felix Leiter, (Jeffrey Wright) shows up and asks for help. The mission to rescue a kidnapped scientist turns out to be far more treacherous than expected, leading Bond on the trail back to a past love Madeleine Swann (Lea Seydoux) and her connection to a mysterious villain (Rami Malek) who's armed with a dangerous new bio-technology.
This review contains spoilers for No Time to Die.
No man is an island. But Daniel Craig's Bond thought he had to be. He used to swallow his emotions so much, he didn't even start letting him fuel his actions and judgement until Vesper made him question everything in Casino Royale - a life outside of being a spy, a sense of normalcy, and also how much someone can betray you once you open up to them. No matter how much incels might hate that this Bond wasn't just a panty-snatchy drink-swilling spy of their dreams, he faced similiar trials with his feelings in every subsequent installment. Emotions clouded his judgement in Quantum of Solace until he saw the mistakes his vengeance heeded and sought to reconcile with what Vesper did. Skyfall arguably sharpens his senses to the best of his and the franchise's abilities by acting as a love letter to Judi Dench's M. Facing off against a brother from another mother, there's a current running through him that made him focus on the mission at hand, especially as it hit closest to home. He couldn't prevent M's death, but he could try to avenge it by holding onto the trust M had in him despite having to make tough calls against him and staying on with MI6. Spectre blew this all up by giving him something to live for with Madelyn. Here are two people who have battened the hatches of their trust, wanting to show each other their scars and start over. It's a perfect place for No Time To Die to pick up, but it definitely bits off more than it can chew.
Most, if not all of, the final installment races to catch up with the idea of legacy - for Bond achieving 007 status and beyond, who he could be outside of a spy, and the franchise righting its wrongs. To do so, it also delves deep into Madeleine's backstory, introduce a more powerful villain and his whole other network of double-agents, get rid of the last one, and lay down the franchise's future. It's quite a lot for a film to cover its bases, but No Time To Die definitely doesn't want you to walk away feeling like zero stones were left unturned.

Where the film suffers the most - an element that 3/4 of this era's Bond films have struggled with - is having the story live up to the running time. For a spy film, the script is obviously going to venture into a wider network of the villains. As linear as the plot in retrospect leads from Bond to Madeleine to Safin, I still felt lost in the weeds of what to keep track of - Blofield (Christoph Waltz) and whether or not Spectre was still viable, Logan Ash and who he was working with, Primo and who he was working for, Valdo Obruchev, Lyutsifer Safin. I consider myself an astute movie goer, but the plot is so busy weaving the biological weapon between old and new villains (or are they all the same and working together? Idk still), I'm pretty sure I just ended up recognizing Rami as the bad guy whenever he showed up. The expanding network of villains and immoral red shirts could've been leaner and linear by honestly killing Blofield in Spectre. In fact, a big portion of this movie wants you to forget the revelation that Blofield was in charge of committing most of the tragedies in Bond's life, and that Safin is primarily hunting down Madeleine - not Bond. While Christoph only sat in his cell still looking bored, the movie thankfully has Rami Malek to cherish his role more. Though his motivations for revenge feels more like an over-reaction to childhood trauma in the third act, he is certainly fun to watch. Just when we thought Blofield was as powerful as any antagonist, this needed one more to up the ante, and Safin fits the bill.

That said, this is still about Bond (and his posse) more than anyone else. Though I still wasn't quite convinced that Craig and Lea Seydoux had palpable chemistry, I appreciated that they're both good enough that they sold it. It helped that they made Madeleine look more mature, given that she's seventeen years younger than him. They also took the time to develop her as a survivor-in-distress. So much so, I swear I heard a thousand incel's voices crying out when she shot a henchman in a forest while Bond carried her daughter to safety. We also get plenty of scenes with Ralph Fiennes, Naomie Harris, Ben Whishaw, Jeffrey Wright, and Lashana Lynch that feels like the whole band is back together after a long five-year wait.

However, Ana De Armas truly steals the show from the ensemble. I thought her role was going to be so much bigger than what it was. So often characters who are bubbly and sweet, are also written or portrayed as stupid. But Paloma wasn't. She was animated, inexperienced, and funny, but also clever, focused, and bad-ass. She really did so much ten minutes, I kept waiting for her to come back. I'm just so excited to see everything Ana does. (For those who know me more, she's reached Dakota Johnson status - so that should say a lot lol) The women in Bond's life have always had a profound impact on him whether longterm fans want to admit or not, and it's nice that the film didn't shy away from that and to see see Ana, Lashana, Lea and Naomie further break into the boys club after Judi and Eva cracked the glass ceiling for this era.

Taking over for Craig's last Bond film is no easy feat, and director Cary Joji Fukunaga truly delivers on making sure this one is memorable. For the past few films, the cinematography and score has never faltered. And Linus Sandgren and Hans Zimmer made sure to uphold its reputation with plenty of scenes where the music and look of the film were exactly right - so much so, I found myself feeling grateful to be seeing it for the first time in cinema instead of at home. As much as there was enough action and moments of stillness to keep the movie chugging along, there was also more humor too. Some jokes were remnants of quips as classy as Casino Royale and Skyfall, and there were others that didn't feel essential. While there are definitely some moments where I think it's Craig being himself than Bond as a character (like slapping Obruchev's ass), it was refreshing to see Bond lose that insular wall he's built. Unlike some other franchises where you can clearly see the production and budget grow exponentially depending on its box office success, this reign of Bond never managed to lose its noir-core too. Even though the plot and the running time is definitely an endurance test, Fukunaga keeps the balance between action, character development, and humor enough that it doesn't feel like the beginning of the end.

Even though Bond already handled his past with Vesper three movies ago and I question how much of this ever came full circle to how she was used as a pawn in the beginning, the film opens with Madeleine asking him to bare his soul, and in exchange, she'll bare hers. Instead of only exuding his patriotism to the love of his country, Bond finally reaches a level of vulnerability he didn't have before. We get to see him be everything he wanted to be - the action hero, the protector, the jokester, the lover, the potential father, the sacrificer. With so many significant series coming to an end in the past few years, it's a special moment when actors are able to give it their all for the final entry of a franchise. There's no doubt that Craig was able to do that here. He's probably one of the most non-toxic men to take up the mantle of Bond, and it's fitting to see a franchise live up to the actor for once, and vice versa. By the closing frames, there was a certain pang of loss for his performances moving forward and a level of uncertainty of how the series will move forward without revamping its whole approach. No Time to Die is not necessarily asking us to consider how the world at large will grieve the loss of someone who lives in the shadows, but showing us how his family will lift his namesake into light.
Rating: ★★☆
at October 26, 2021