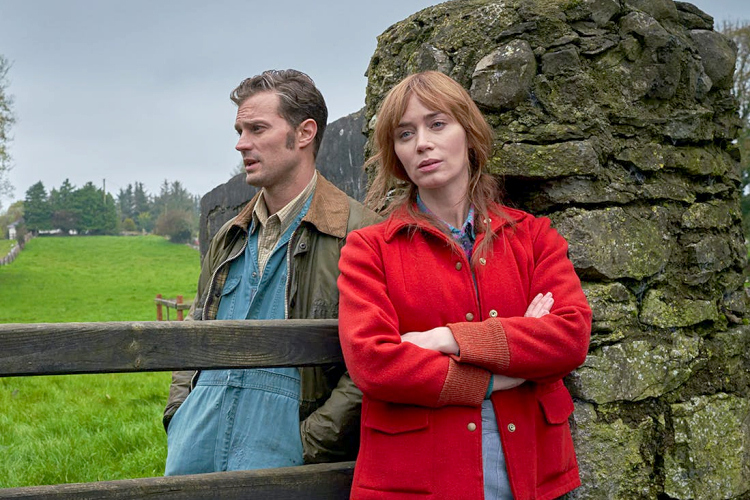 Going by social media reviews and hype, it seemed like director and writer John Patrick Shanley’s latest film was a perfect runner-up to a crazy it’s-so-bad-it’s-good hit like the notorious Cats. If you hear a flick is bad enough you got to check it out for yourself – almost as a litmus test of how much pain you can put yourself through. While Wild Mountain Thyme doesn't feature floating-heads-on-cat-bodies, it does get a Serenity for sheer wonkiness.

Out in the Irish countryside, Rosemary Muldoon (Emily Blunt) has had the hots for her next door neighbor Anthony Reilly (Jamie Dornan) since they were kids. The problem is he’s never made a move. His lack of romantic interests is so disheartening his father Tony Reilly (Christopher Walken) threatens to sell their farm to an American nephew (Jon Hamm) instead of his own son.

The one thing you’ll know for sure as you start to watch Wild Mountain Thyme is that it is very Irish – and we’re not just talking about the setting. The dialogue is filled with quirky dialogue and puns mixed in with lyrical romantic prose, the leads are miscommunicating their feelings all over the place, small town characters who are so wholesome they make your teeth ache, and gorgeous cinematography.  Shanley packs the film with everything so quintessentially Irish, you swore it was a love letter to his Irish-American roots until you hear from people in Ireland declare the film is meant for Americans. Who the film is actually for will be up for debate forever – the rom-com fans who want something batty, the indie lovers who love underrated classics, the surrealists who will spin the ending into something deeper.

Outside of the plot and general mood, the film is in fact very Irish except for the accents. Blunt tries her best, but the lilt and smoothness never quite takes hold. Hers is comparably better than Walken attempting at an Irish accent every other sentence, while Dornan, who is actually Irish, sounds like he can't keep his natural lilt in tact. I bring up the accents specifically because you need them to be as natural as possible when the whole plot depends on the setting. heir jagged Irish-American-British accents offers a bigger piece to the puzzle of why their performances are okay but can't carry the movie. Walken is very Walken, and Hamm is very Hamm. Blunt could pull off Rosemary’s charming mix of mischievous determination and hopeless lovestruck nature in any other film, but she struggles here more than expected – like Queen Amy Adams in Hillbilly Elegy, she seems apt to want to do more but the direction holds her back. Dornan provides an affable awkwardness that makes you see why Tony struggles to come out of his shell, but again, he’s limited by how oddball the script wants him to be and waiting to make his work pay off until the big twist arrives.

And the big twist is what really makes Wild Mountain Thyme so worth talking about but also so forgettable. If took anybody twenty years to ask Emily Blunt, I mean Rosemary out, and they lived right next door to her your whole life, there’s gonna be questions. But for Tony in particular, one has to wonder if he is gay - maybe he's just not had enough male acquaintances to figure it out and the plot will diverge from turning him and Rosemary soulmates because they are the only two people around in 50 miles. Is he really horrible at reading her cues to ask her out? Or is he just never going to get around it because he’s in no rush?

None of these assumptions prepares for why Tony can’t merely ask Rosemary out, let alone declare his eternal love for her. And that's because Tony, of all things, thinks he’s a bumble bee.

And that’s about it, folks.

He once sniffed a flower so deeply when he was a boy he got pollen on his nose, and he’s thought he was a bee ever since. The script truly takes its time to experiment with why Rosemary seems to wait so patiently for Tony, despite his total lack of ability to read between the lines. So much so, it's tempting to believe the film is building up to an old-fashioned notion of how true love stories take time to bloom. But the reasoning behind Tony's belief is pretty non-existent – there’s no real indication in background story or notable scenes of why he came to this conclusion. As easily as Tony believes he's a bee, the movie wants you to believe this twist works or makes sense, and it does not. It's downright wonky, and will make me question until the end of my days if I'm missing something meaningful than what's on the surface.

Wild Mountain Thyme isn’t so much “bad” as it is chaotically stilted in its script, direction, and acting. So, I guess it is pretty bad, especially when most of the movie requires you to be patient with the lack of chemistry between the two leads. You can leave most of the film behind to forget about. But the gumption Shanley has to deliver such a left-turn twist is something I kind of what to take with me into 2021.

Have you seen Wild Mountain Thyme? What did you think?
at December 29, 2020