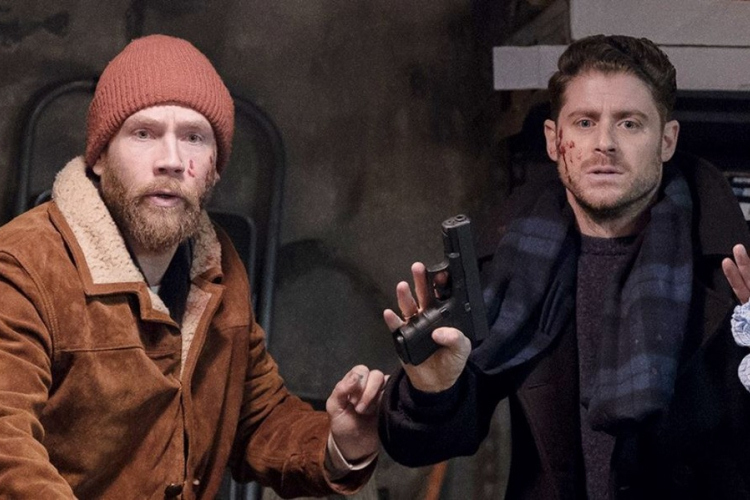 In the gritty world of mobsters, there’s the hunter and the prey. A hierarchy of crime bosses rule the roost while their henchmen or women, loaners, and sharks must obey pecking order to survive. Step one toe out of line and the whole business descends into chaos. This is something two hapless brothers in Clover learn the hard way.

Mickey (Jon Abrahams) and Jackie (Mark Webber) Callaghan are about to lose the pub that's been in the family for generations. The night before they’re supposed to payback a sizable loan, Jackie loses it all while gambling. When local mobster Tony Davolio (Chazz Palminteri) offers one last opportunity to wipe the slate clean, the siblings must go on the run with a young girl Clover (Nicole Elizabeth Berger) after she accidentally kills Davolio’s son.


Less focused on replicating the grim harsh world of other mobster flicks, Clover mixes humor and violence to show a side we don’t often see: those who are sometimes just in the right place and the right time...or not.

Aside from some amusing supporting characters, the film relies on the dysfunctional relationship between Mickey, Jackie, and Clover. The Callaghan brothers only want to hold onto their pub and maintain some dignity with their family name until it all goes south with Jackie's typical impetuous decisions. It's clear right away that the brothers love each other, but even when they're facing down a barrel of a gun they can't stop finger-pointing or casting biting jabs. When Clover enters the picture, she proves to be the luckiest charm the duo could’ve ever hoped for or the worst wrench in their plans. Both Abrahams and Webber share impeccable comedic timing and connect as dysfunctional brothers who get on each other's nerves, while Nicole Elizabeth Berger adds a mysterious and curious presence to their polar opposite plans and ideas to stay safe and protect each other.

As the trio are on the move from lackies looking to collect, a string of allies and antagonists are introduced along the way and give their misadventures a few memorable laughs and add to the wild goose chase. In particular, a great cameo by Ron Pearlman in the opening as a top boss sets the tone for the film, while fierce club owner Pat (Tichina Arnold) and two assassins Gertie and Virginia (Erika Christensen and Julia Jones) are worthy of their spin-offs. The cast as a whole fall into their 'stock' mob characters and turn in entertaining performances.

Abrahams is as comfortable on-screen portraying Mickey as he is off-screen serving as the film's director. He possesses a deft skill at pacing the film's comedic moments as well as its action, and letting the actors infuse the story with refreshing personalities. Where the fun intermittently wears off is Michael Testone's script. Crafted to keep the characters failing spectacularly at staying one step ahead of the game, a bulk of the story relies too heavily on backing the trio into a corner from one locale to another and then forcing them on the move again. The wrenches in their plans create chaos to keep the plot moving, but it's also a rinse and repeat cycle without a heftier conflict that raises thes stakes. To spike up the plot, a few of the twists (which I won't spoil here) are too random for their own good, while one major turn is suitably plausible to tie the film together. Herein lies a considerable gamble with the audience who may or may not consider if all of the pieces fit as smoothly as they should.

What’s clear throughout Clover is that everyone is clearly having enjoying with their roles and the story as a whole, a memorable quality that’s often missing in Hollywood’s biggest blockbusters. The plot itself treads unfamiliar territory but it's not overtly exciting. Abrahams and Webber with Berger make for a memorable comedic trio. A few tweaks could've elevated the story to another level, but overall, Abrahams's solid direction is an enjoyable entry into a genre that sometimes takes itself too seriously.

Please Note: I was provided with a screener to watch this film and provide an honest review. Check the film’s Facebook page for more details. The film will be available on platforms such as iTunes and GooglePlay April 3rd.
at March 30, 2020