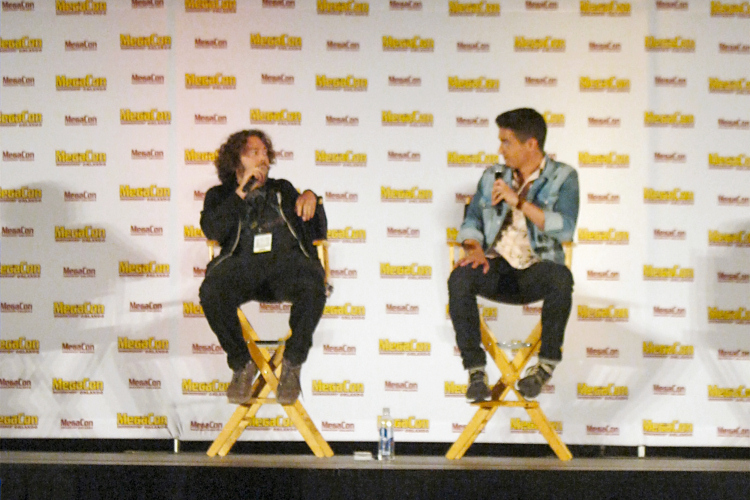 In J.K. Rowling's spin-off series to Harry Potter, No-Maj Jacob Kowalski captured Potterheads' hearts in Fantastic Beasts and Where To Find Them and Fantastic Beasts: The Crimes of Grindelwald. Leading the franchise alongside Eddie Redmayne, Katharine Waterson and Alison Sudol, the rising star Dan Fogler made a fantastic appearance at MegaCon Orlando with a panel full of impersonations, tales from the set and questions about the series' future.

A big topic of conversation at the panel was arguably Fogler's most popular character to date from Fantastic Beasts. Fellow Potterheads delved deep into the wizarding world about his time at the theme parks, his own favorite baked goods, and so much more. Here's a general transcript of fans' questions from the panel that are not included in the videos below.

What is Dan's favorite baked goods?
Dan: Entenmann's doughnuts, but specifically, chocolate with flakes of vanilla crumbs on top.

Has Dan been able to "lift" any props from the Fantastic Beasts set?
The studios have strict rules about what can be taken from the set even for the cast members. Dan said the difficult process of cast members saving props or wardrobe pieces for themselves started with Harry Potter because Daniel Radcliffe had accidentally taken home over dozens of pairs of glasses. And there's also the infamous rumor of Tom Felton and Daniel Radcliffe trying to prank studio security by having Daniel hide in the back of Tom's car. Dan said that he hasn't tried anything that drastic, but the costume department has let him keep a pair of his socks from both Fantastic Beasts movies.

What are his experiences like going to Universal's theme parks?
Since being apart of the extended Harry Potter universe, one would expect that it's relatively easy to be able to go in and out of the parks. Dan said he loves to visit them when he can, but it's hard for him to be recognized when he doesn't have a mustache similar to Jacob's in the movies.

He also revealed that he used to visit family in Fort Lauderdale growing up and that he loved Disney's EPCOT with his favorite character being the Figment of Imagination dragon. He shared a story of riding Space Mount with his father. For fans who don't know, it's a space-themed roller coaster that takes place almost entirely in the dark. While riding, he said he felt a hand touch him on the back and it scared him to death. He was screaming the whole time, while his father and brother remained silent trying not to laugh. Afterwards, his brother only asked if they wanted to go on it again.

What's his favorite book?
Harry Potter only has one of the biggest literary fanbases in the entire world, so it was fitting that a fan asked him what his favorite book was. Daniel shared that he's always reading, so it's hard for him to pick all-time favorites. But he revealed a few that he's read recently that he loved: East of West, 100 Bullets, The Walking Dead. He said The Count of Monte Crisco and The Alchemist were high on his list of all-time faves.

Check out more of Dan answering fan's questions below including his impersonations of Christopher Walken and Al Pacino, what it was like to win a Tony, and meeting J.K. Rowling for the first time.