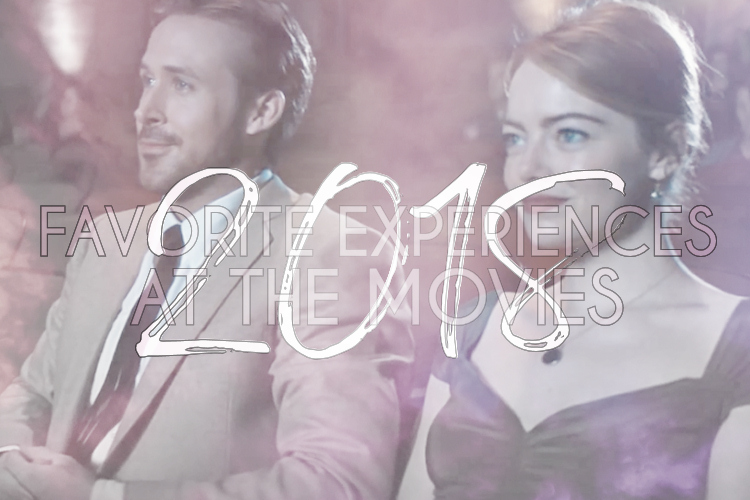 It's hard to believe another year of going to the movies have come and gone. There's plenty of movies that I missed out on seeing in the theaters as I hoped, but there's quite a few that will always by in my mind as some of the best experiences I've had. Here are five of my favorite moments to happen at the cinema this year. What was your favorite movie theater experience in 2018? Feel free to let me know in the comments.

Since the first movie came out, I had a tradition to go the theaters, order a little drink, and question my life choices. When a marathon of the trilogy taking place on a Thursday morning-afternoon came along, I thought 'Sure why not' and had no idea what I was getting myself into. Because the first two movies had been as empty as a ghost town in Nevada on opening weekend, I thought the theater would be empty for the marathon too and I could wallow in embarrassment alone. Call me Fifty Shades of Surprised when the theater sold-out, filling up with all kinds of gal pals and couples.

When a woman's defibrillator shocked her in the middle of the first movie, the marathon was halted so the EMTs could make sure she was okay (she was). For about forty-five minutes, we were left with free time to chit-chat. It was fun to meet with fans face-to-face and talk about how Jamie's accent slipped in certain scenes and how much better Dakota made Ana than how she was in the books. Because of our collective enthusiasm, watching one sex scene after another was not awkward because most of the people there had the books memorized, and hilariously enough, Anastasia parallel-parking in the last movie earned the biggest round of hoots and hollers. Yes, the franchise gets a bad wrap, but the fans behind the series are real. And, that's something I wished studios and the media took into consideration across all fandoms.

Sometimes I bounce back and forth between waiting to see a movie in the comfort of my living room or going to the theaters, where people treat the theater like it's their living room and generally sucks the fun out of going to the movies. Mary Poppins Returns screamed 'See Me In Theaters'. Thankfully, the movie's available in Dolby, the only way to see a movie these days, and the experience was totally worth it. Rob Marshall is not everyone's favorite director, but I love that he's bringing back old school musicals. And, this one is truly a gem. Feeling uplifted by the music and production design is something I'll never forget.

This is the first film I saw in Dolby. It's one thing to see an action movie in a regular theater. It's another for the action to explode through an entire floor-to-ceiling screen, for the picture-quality to be so crystal clear you feel like you're on set, and the audio to be so loud the seats literally shake. I would've seen Fallout again even if it wasn't in Dolby, but the scene that literally hypnotized me to do so ASAP was the club fight scene. You could hear the music to the club pulsating in the background just like you were inside the bathroom as Ethan and August were brawling it out against John Lark. You could see every punch and deflection so clearly as the tension of getting caught or injured kept building until Ilsa ends it with a bang. *sigh* AWESOME.

A Star is Born

BLACK EYES OPEN WIDE. IT'S TIME TO TESTIFY. THERE'S NO ROOM FOR LIES. WHEN EVERYONE'S WAITING FOR YOU. I completely did not expect for this to be the opening number for A Star Is Born, and I almost slapped the guy next to me 'cause I also did not expect a pretty convincing voice to come out of BCoop. We saw this in Dolby too, and it was like being at a rock concert. I wanted Black Eyes to last forever.

The Snap. Everyone will remember where they were when Thanos's reckoning started. Even though I was praying thatSteve would be safe, to be honest, I was chill about it like Marvel can't truly be killing all of their favorite characters. And then the scene kept going on and on and on. The laughter the sold-out crowd had been bellowing for the first two and a half hours faded away. As we watched one character after another do their best Voldemort impression, the last half-hour hit us all in the feels. When the end credits hit out of nowhere, I've never seen so many people jump from their seats in terror and panic. Of course, being a sold-out theater of die-hard Marvel fans, everyone waited for the post-credits scenes where the hint of Captain Marvel shot us with adrenaline again. I've never been apart of a reaction like this before...and it might only ever happen again with Avengers: Endgame. *prayer circle*
at December 21, 2018