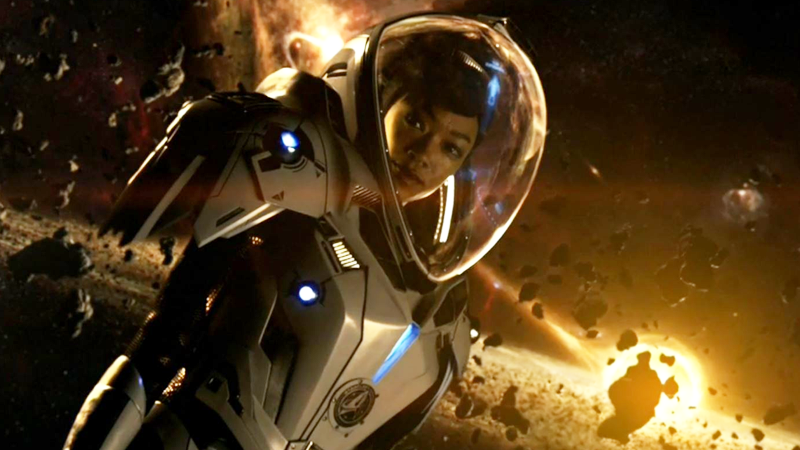 Unlike the trailer reactions usually reserved for movies, CBS dropped a new teaser for the highly anticipated Star Trek spin-off that I just couldn't want to tap my keys about.

Set ten years before Kirk and Spock embarked on adventures across the galaxies, Trekkers will join Michelle Yeoh and Sonequa Martin-Green aboard Star Trek: Discovery this fall. Even a Vulcan would get the feels for this trailer. Here it is in full!

This sneak peak comes swiftly after a series of grueling announcements from networks cleaning house and canceling television shows. Studios are now trying to entice viewers with fresh content to fill the void of long-gone favorites. No doubt about it, this trailer has gotten me really excited for fall.

Discovery is a prequel to the initial Star Trek series, but the similar camaraderie between the Starfleet crew permeates across time and space. Longtime Captain Philippa Georgiou (Yeoh) gives First Officer Michael Burnham (Green) an opportunity helm U.S.S. Discovery when they're entangled with the Klingon Empire. They're faced with the tough decisions of how to maintain their humanity, keep the peace, or engage in an unwanted war.

The first of my feels, or probably all of them, are struck with seeing two women command the starship alongside the other eclectic personalities on the bridge. More cast members include Jason Isaacs (Harry Potter), Rainn Wilson (The Office), and Anthony Rapp (Rent),  Not that the series hasn't had a female captain before, but who gets tired of seeing women helping other women succeed? Star Trek has always centered on the human (and non-human) condition first, and adventures set against space second. Fascinating issues will likely arise between the different species, and how they co-exist.

Star Trek: Discovery's first season will be told in fifteen episodes. Showrunner Bryan Fuller said that each episode is a chapter, within each chapter will be a beginning, middle, and end.” The writing team has sturdy experience with the Trek universe so far, with a myriad of credits from Alex Kurtzman (Star Trek: Into Darkness) to Nicholas Meyer (Star Trek II: The Wrath of Khan, Star Trek IV: The Voyage Home, Star Trek VI: The Undiscovered Country).

What we know of the plot is that it's set in the Prime universe, closer to the original 1966 series instead of the Kelvin timeline for the recent movies starring Chris Pine and Zachary Quinto. The appearance of Klingons have completely changed, not to mention that the production incorporates a lot of J.J. Abram's use of lens flare. Though Fuller's creation certainly has the technology to produce a budget-friendly production with impressive special effects, some fans might struggle to connect the dots of inspiration this tale is drawing from.

Details coming to light such as the starship's slick design, those iconic uniforms, and a new alien species which can sense death, hint that we're definitely in for an original expedition in a familiar era. With the story in mind and a unique cast of characters, it'll be fascinating to see what events link this prequel to the William Shatner and Leonard Nimoy starring game changer we know and love.

The first episode will premiere on CBS with all subsequent episodes becoming available on the channel's exclusive streaming service All Access. It will also be accompanied by a post-show called Talking Trek.

Are you guys ready to go boldly where Discovery voyages? What do you think?
at May 17, 2017