Negan arrives at Alexandria to collect his 'earnings' but Rick and the community aren't ready. People are divided on whether to try to overthrow their new leader or surrender to his command. This post contains spoilers. You've been warned!


After a lackluster start to season seven, the announcement of a 90 minute installment fueled a bit of excitement. What was going to happen so significantly that Service warranted an extra half-hour?

Negan's visit was a surprise to Rick and co. who weren't expecting him for at least a week, but he came early to collect...the fruitless material things that might make our grieving family the slightest bit comfortable. Like the Grinch weaving in an out of Whoville, Negan's boys rounded up the couches, mattresses, hardware, and eventually the guns. Rick was forced to follow the leader while carrying Lucille, trying to speak through body language to Daryl, and wanting to beat the hell out of Spencer (like we all do).

The biggest conflict didn't necessarily have anything to do with Negan. It was the group handling their new leader. Rick was forced to re-enforce the rules that Negan was in charge when his group threatened to kill Olivia because two guns were missing from the armory's inventory. Even though Rick had to race against the clock before Negan lifted a finger to kill Olivia, it's hard to take his threats with genuine concern.

Personally, even with as little tension as possible, I enjoyed Rick's struggle. With restraint of the iconic head-tilt and headstrong temper, his loyalty edged in and out. Every time Negan got on the sheriff's way, he would grip Lucille tighter and then his resolve would weaken. While the episode didn't exhibit the group mourning Glenn or Abe's loss as a whole, Rick's grief was divulged enough to not make the episode feel like it was entirely Negan's show.

Everyone in Alexandria is still riding out that high of invincibility after slaying the barricade of walkers in their community. That is except for those who saw Negan's bloodshed in person. The episode almost became a Rick vs the people re-run from his season three days (in fact a lot reminds me of that era when Rick's moves depended on the Governor's threats). Some couples and individuals still have the desire to fight while others' confidence has been shattered.

Aaron supports Rick acquiescing to Negan while Eric wants to stand up for themselves. Michonne is working on her marksman skills out in a meadow, not fully surrendering to what happened. Father Gabriel (his scene with Negan was hysterical) thought quickly about making it look like Maggie was buried in their cemetery. I don't know how long this is going to last since the Saviors will be moving to the Hilltop Colony where Maggie is. Have they achieved the obliviate spell  to perform?

Service gave us an iota of the Team Family we've been waiting for but didn't do much for this tiring antagonist.

For all of the nursery rhyme chants and empty threats he makes, Negan is stuck in a behavioral and personality rut. His speeches of owning everyone, and blah blah blah is passed repetitive. He spews so much hot air to little results, the Oscars orchestra should play him off. Not to mention the more screentime Negan's emasculating jocularity has had, the women are forced to either take the backburner or be demeaned by his creepy "testosterone".


Find anything else? - Dwight
Just your dead friends. - Rosita

In contrast, Dwight captures more interest and attention. He might be Daryl 2.0, but his power exudes through the few actions he takes with sick delight. All he had to do was roll into the joint and target Rosita by stripping her of guns, water, AND HER HAT. And then demanded her and Spencer fetch Daryl's bike where Denise died. It was quiet but ruthless, and also fueled Rosita's determination. Austin did so much less than Jeffrey Dean Morgan and achieved so much more.

As well, who likes or loves-to-hate Spencer? The last remaining member of Deanna's family is so whiny and cowardice (though has a good point that the group wouldn't be in such a desperate situation if it wasn't for Rick) that he preaches to Rosita about what's best for them when he doesn't know what it is best for anyone. And while she is fiercely fighting back to gain more weapons and hide them from the Saviors by killing freaking walkers, he hid food, booze, and the missing guns Rick needed in order to save someone's life. On top of which, when confronted, Rick insults him and abuses Glenn and Abe's memory. Deanna would be ashamed of him, but at least Spencer gives more to loathe than Negan.

The episode wrapped itself up with Rick's admittance of his love for Judith as his step-daughter. Though we haven't talked about Shane and Lori's affair for a few years, and it was probably an unspoken assumption by fans that Rick wasn't his, this reminder brought up the consequences to a lot of tough decisions he's had to shoulder.


I wanted to break your jaw, let you choke on your teeth. But I didn't. That wasn't weakness. It took everything. - Rick to Shane, 18 Miles Out

But Rick accepting so much abuse from Negan forces us to question to what end does he think this is a good life, let alone a life for Judith or the community? Breathing is better than nothing, but as Beth once said, 'If you don't have hope what's the point of living?' Michonne pointed out they earned everything they have from from fighting. Even with the number of fighters against them, there has to be some way out of this. It might not be obvious right now, but the opportunity to strike will make itself known. But Rick confiding in Michonne and pleading his case spoke volumes to just how much losing people on his watch affects him now as much as it ever did.

Only a few rich moments of our group and peaks with Dwight saved Service from being a dud but just barely - mostly due to the throwbacks to season two and three with Rick's contention against Shane and the Governor. It seems to be a trend that the cast fulfills what the writing lacks. The show doesn't ultimately have to service full episodes to individual groups but if it does, the pace has to do us a service and start picking things up soon. 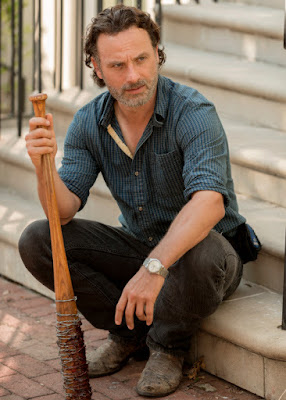 Additional Thoughts:
+ THIS. BLUE. SHIRT. IS. EVERYTHING.

+ ROSITA AND MICHONNE are magic.

+ Oh look, as my friend Brittany said, the show remembered Aaron and Eric.

+ Negan shooting into the window was a nice homage to Rick's paraphrased window theory from season five.

+ Does Carl ever catch a break? He stands up to Negan face-to-face and is adamant about being the man Rick has raised him to be. I mean, he just rocks.

+ Enid held onto the balloons Glenn and her set off in Heads Up. DAMN IT.

+ Negan stole the mattresses to burn them. *sigh*

+  "Mercy for the lost, Vengeance for the plunderers". Was this new writing on Alexandria's wall? Reminds me of Terminus.
at November 16, 2016