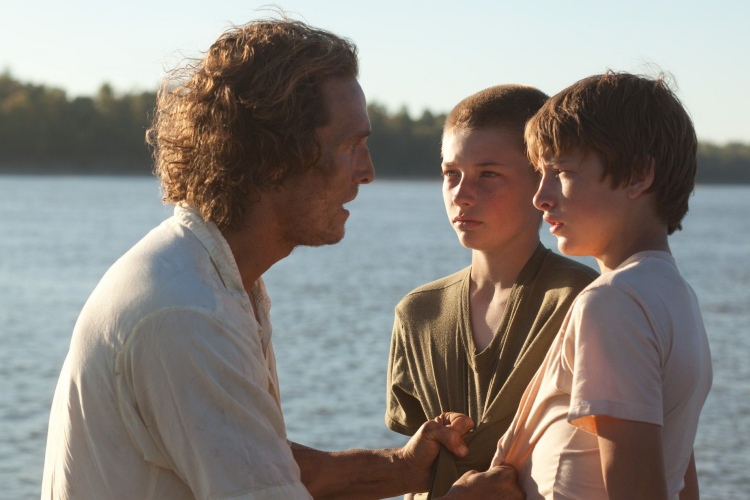 Two young kids in their motor boat voyage out to an abandoned island on the Mississippi River. Thinking it'll be a day of wandering exploration, it's quite a welcoming surprise to Ellis (one of the two boys) when they meet a lean dirty straggler. He has a few cracked teeth, been living in a dilapidated boat, and owns nothing but the shirt on his back and a glock. His name is Mud.

The mysterious presence around him is what makes us itching to know more about why he is a lone wolf on deserted land. After persistent probing, when Mud finally unveils a passionate confession about murdering a man who had beaten up the woman he loves, Juniper, the intrigue doesn't dissipate. Played by Matthew McConaughey, he pours out the truth with such heartache, you can't help but take him at his word.

But we hear different perspectives of who Mud is. The boys help Mud make connections to his family and Juniper back on the homeland while helping him rebuild a boat for an escape. His father declares that his son is a foolish soul who misplaced his ambitions in life - not just love - to a woman who never cared about him at all. Juniper (Reese Witherspoon), who walks the fine line of settling for Mud and wanting to escape his adoration (or even obsession), says that he is a born liar; one that tells fibs to make himself out to be something he's not. While we may not fully trust Mud, we rely on what he reveals to Ellis to be the truth - for what its worth.

The clock is ticking down. State troopers are setting up roadblocks and plastering his wanted photo all over town. And, the relatives of Mud's victim are ruthlessly searching for him as well - not even stopping at berating Juniper and Ellis in a dirty motel room in a palpable verbal beatdown. Though the story doesn't excuse the violent actions of the bounty hunters nor Mud, there isn't one character who is a true villain. Nobody carries a specific antagonist persona because everyone has something worth fighting for.

In many ways Ellis is a younger version of Mud. When his parents announce their separation, he relies on Mud's faith to Juniper to believe love exists. He's a young boy who is experiencing his first romance to an older teen Mary Pearl, who isn't exactly his other half Like Mud, he only knows the definite feeling of love in his bones. Their physical representation of devotion is swinging in on a vine and flailing their fists in protection against meddlers. They believe this might encourage their feelings to be reciprocated. It can't be controlled and hearts are trampled along the way.

Through the relationships of father and his son, a mother and son, a man and a woman, love and its limitations is weaved by how each character has their own way of protecting one another. Experience and time brings its own expression through different avenues of reciprocation. Sometimes it means standing true to the ones you love, and loving someone enough to leave them behind and go your own route.

The biggest impression Mud left with me was that it's a slow-churning movie about trust. The deep south is a culture of your word being your bond, and the movies' characters and story reflects that. Mud and Ellis' faith and companionship is what the film relies on. Every performance from Matthew McConaughey as Mud to Ray McKinnon as Ellis' father Senior carries the film to its palpable intrigue. And the test of love binds them all together from friends, lovers to children and parents. Director Jeff Nichols' complex story keeps you riding its waves from beginning to end.